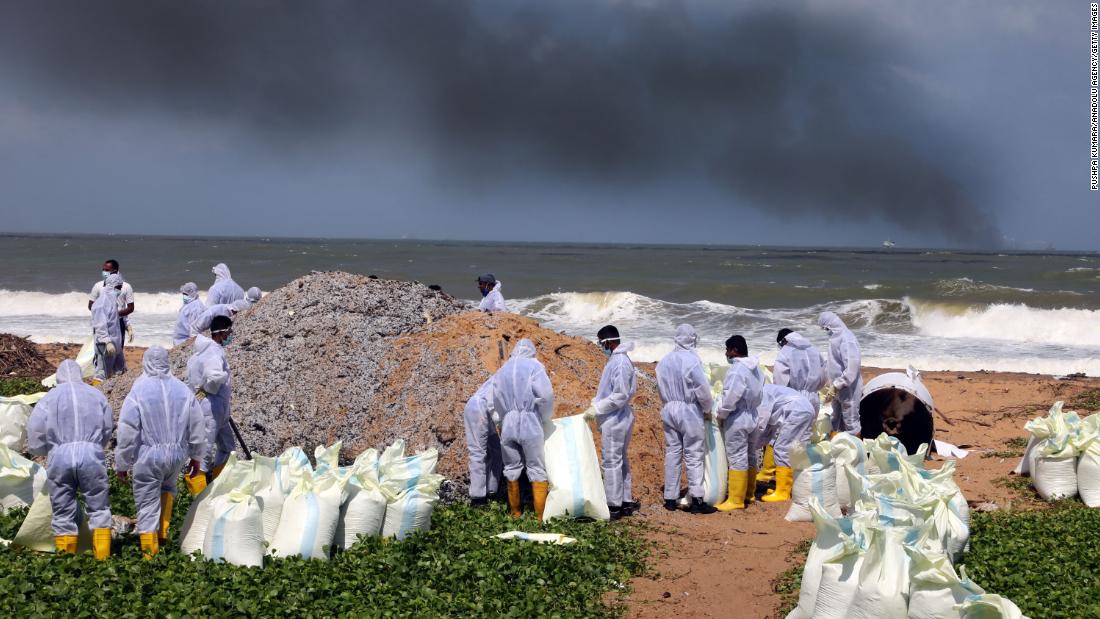 (CNN) – A massive clean-up operation was advancing in Sri Lanka for the sixth day on Tuesday, after a chemical-laden container ship caught fire 12 days ago, polluting the country’s west coast with microplastics and potentially hazardous waste.

Sri Lankan ecologists have said it is one of the worst ecological disasters in the country’s history and have warned of a possible threat to marine life and the fishing industry.

Members of the Sri Lankan Navy donned protective suits and rubber boots to remove plastic pellets, chemical residue and debris that have littered the beaches near the capital Colombo, including the popular tourist site of Negombo.

The Singapore-registered MS X-Press Pearl was sailing from Gujarat, India to Colombo when a fire broke out on board on 20 May, while it was nine nautical miles (about 16 kilometers) off the coast of Sri Lanka. . Since then, the Sri Lankan Navy and the Indian Coast Guard have tried to put out the flames and prevent the ship from breaking down or sinking.

If that happens, 350 metric tons of oil could leak into the ocean with the potential to cause widespread ecological damage to marine life and affect 30 kilometers (18.6 miles) of coastline between the capital and Negombo, the minister said last week. of Sri Lanka, Kanchana Wijesekera.

Members of the Sri Lankan Navy dressed in protective suits work to clean up toxic debris on the beaches in the suburbs of Colombo on May 28.

The ship was carrying 1,486 containers when the fire started, 81 of which contained “dangerous goods,” including 25 metric tons of nitric acid, according to X-Press Feeders, the operators of the X-Press Pearl. It has not yet been confirmed what other chemicals were on board the ship.

On Monday, the Sri Lanka Port Authority It said the ship’s hull was still structurally intact and that “no oil or chemical spills have been observed so far.”

“The lifeguards are also exploring the possibility of boarding the ship and making a towing connection so that it can be moved,” the port authority said in a statement.

X-Press Feeders said Monday that “there were no visible flames on board the vessel, although smoke continues to billow from areas of the stern of the ship,” according to the company’s Incident Information Center, referring to the area towards the side. rear of the vessel.

Four members of the Sri Lankan Navy remove the remains of one of the containers belonging to the Singapore-registered ship.

«Firefighting tugs will continue spraying and misting operations to ensure cooling of all hot spots, hull and hatches of the ship, with temperature readings being taken with specialized equipment that has arrived from the Netherlands ‘He continued.

All 25 crew members have been evacuated and most are in quarantine at local hotels. Two crew members suffered leg injuries after an onboard explosion on May 25 and were taken to hospital. One of them subsequently tested positive for Covid-19 and was transferred to a special facility in a military hospital, according to X-Press Feeders.

They seek to minimize environmental impact due to oil spill 0:40

The company said it was “assisting local police in their investigations into the fire and is cooperating with investigators.”

“X-Press Feeders remains fully focused on the ongoing rescue and firefighting operation and will continue to cooperate with the relevant investigations into this incident,” he said.

The Sri Lankan authorities have launched criminal and civil investigations into the origin of the fire.

X-Press Feeders said it was “too early to tell” but had already reported that one of the containers on board had a nitric acid leak at its previous stops at the port of Hamad in Qatar and the port of Hazira, in India. The company said that “the advice given was that there were no specialist facilities or know-how immediately available to deal with the leaking unit.”

Concern for fishermen and marine life

The Sri Lanka Marine Environment and Protection Authority (MEPA) declared in the local media that plastic waste had caused “the worst environmental disaster we have ever seen”. The MEPA added that the damage caused by the ship is still being calculated.

An excavator removes cargo from the MS X-Press Pearl on Pamunugama Beach in Negombo on May 28.

Muditha Katuwawala, coordinator of the Sri Lanka environmental group Pearl Protectors, said the ocean around the ship would become “quite toxic” and expressed concern about the possible impact on marine life, including several local species of turtles and fish.

One of the biggest concerns was the millions of plastic balls that are polluting the waters and that have appeared on the beaches of the coast after about three containers fell into the sea, he said, raising fears that fish and other wildlife microparticles can be swallowed.

Granulated plastic, or nurdles, are used to make other plastic products and are a major source of plastic pollution in the oceans. Due to their small size, birds, fish, and other marine animals can mistake them for food.

The impact of rain and wind

Katuwawala said that another cause for concern is the monsoon rains and the wind blowing the granules along the coast.

“Yesterday, and even today, we see how the movement of plastic granules is contaminating the entire western coast of Sri Lanka and along the southern coast. This is going to have a serious social and environmental impact, “he said.

Researchers are still trying to determine the impact on the environment and marine life, he added. But the fishing industry – which many coastal dwellers depend on for their livelihoods – has already been hit by coronavirus restrictions.

Wijesekera, the fisheries minister, suspended activity in the area surrounding the wrecked ship, saying that compensation would be given to those whose jobs were affected by the disaster.

Speaking to CNN last week, Wijesekera said: “We are doing everything we can to protect the coastline,” but if the ship eventually sinks, “we don’t have adequate resources to manage all the spill.”

Even if the ship doesn’t sink, he said it could “take weeks to finish the cleanup.”

Angus Watson contributed to this report.

One thought on “Could be ‘worst environmental disaster’: Burning cargo ship in Sri Lanka is polluting shoreline”