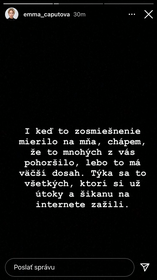 During today, MP Tomáš Taraba published the status with a photograph of the daughter of President Zuzana Čaputová, Emma Čaputová, in which he wrote, “After yesterday we know that we have a new top model in Slovakia,” stated in the description of the article.

Since the publication of this status, Emmy Čaputová has been supported by several deputies or public figures, as well as the president herself commented on this contribution. In the context of his profile, it is a matter of ridiculing the appearance of a young model.

Shortly after the outbreak of this public scandal, Emma Čaputová commented on her Instagram profile, where in her short story (stories) she thanked all those who showed her any support.

She further stated “Although the ridicule was aimed at me, I understand that it has offended many of you because it has a greater impact. This applies to everyone who has already experienced attacks and bullying on the Internet. “ In the last post, she once again publicly thanked everyone for their support. “I’m sending it on to anyone who has experienced something similar,” she added.

MP Tomáš Taraba, a former member of the ĽSNS club and the current chairman of the ŽIVOT party, commented on his already published contribution today. social network again, but this time via video.

Mr Taraba began by saying that he had already offered several interviews and answers that had been asked of him today, and he had answered all the questions in the same way, but he still wanted to comment on the situation on his social network.

“Still, I will give my own opinion, because I can imagine how it will all be cut. I wrote today that we have a new model in Slovakia and this is all I wrote, “ explains Taraba MEP in the video.

He says that it was the media that put a “virtual reality” into this story. “All I can say is that I consider it nothing more than an ordinary bullying against myself, because I did not write anything other than this one sentence, nothing else. “ MPs Taraba states in the video.

“The fact that the President’s sentence that I consider her daughter to be a promising model, that she considers it a bottom, I don’t know if she will also evaluate it over time, but I don’t understand such a statement and I don’t see the absolute meaning of to comment on any narratives that anyone else has put into it, “ MEP Taraba defends himself.

In the video, Tomáš Taraba also talks about how he thinks the current journalistic work works. He claims that he is curious how the individual media cut his statements on the whole situation.

“I consider this to be ordinary bullying, not only so that one can express oneself normally, but bullying, that space is being created here to attack us, just because someone will say that we are not politically sympathetic to them.” adds MP Taraba in the video.

“It cannot be ruled out that Mr Taraba did this out of malice. He knows what kind of fans he has on social networks, he had to be sure that they would react the way they did. It fills with bile and hatred. If he does this well to a politician, he should show himself in a different way and in a different place. “

1 thought on “Emma Čaputová spoke in the Taraba case. The political scientist has a clear message: the Member should show himself elsewhere – Startitup”