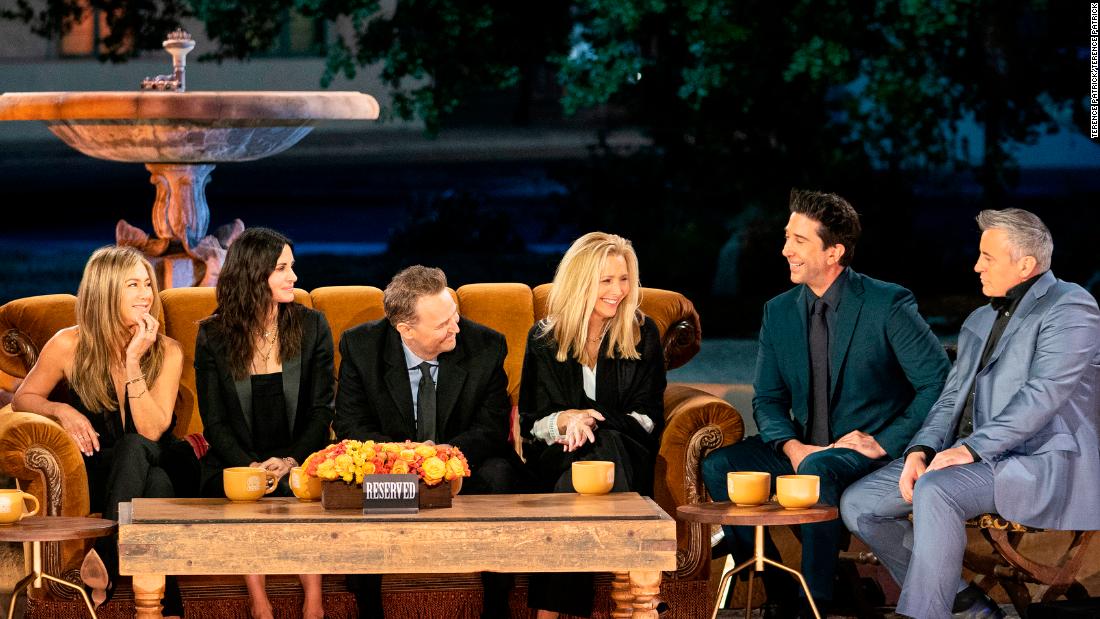 This is how the cast of “Friends” imagines its characters today 1:57

The nearly two-hour long special inevitably doesn’t justify the fuss, and works best when the cast is engaged casually remember, while getting carried away by cameos, some of which, well, couldn’t be more random.

“Friends” was fired in 2004, and part of the show’s appeal is simply seeing the band reunited, looking older (some older than others) and undeniably with much more money. One by one, they return to the set and the stage, exchanging slightly awkward hugs (welcome back to the times of covid-19) and sharing memories.

Directed and produced by “The Late Late Show with James Corden” producer Ben Winston, who recently did a good job overseeing the Grammys, the special uses a mix of techniques to structure and order this walk through the trunk of memories, including an in-person interview with Corden in front of a grateful and socially estranged audience.

Some of these techniques are better than others, perhaps the best being the snippets in which the series’ stars Jennifer Aniston, Courteney Cox, Lisa Kudrow, Matt LeBlanc, Matthew Perry and David Schwimmer, engage in readings of old episodes, interspersed with fragments of the originals. It’s the closest thing to a scripted “Friends” reunion we can find, and it’s fascinating to watch them slip seamlessly into these roles 17 years later.

Other highlights are a recorded piece in which producers Kevin Bright, Marta Kauffman and David Crane talk about the casting of the series, and all the coincidences that have brought these six actors together, and interviews with fans from all over the world. , who talk about what the series meant to them.

The cast gathers in a familiar place for ‘Friends: The Reunion’ (Terence Patrick).

“We didn’t want stars,” Crane recalls during the discussion about the casting process. Instead, “Friends” turned its actors into stars, leaving them in a very different place when the series ended a decade after it began.

At the same time, “The Reunion” goes to some lengths to create a sense of fun, subjecting the actors to quiz-style trivia tests and resorting to celebrities whose participation is both arbitrary and unnecessary.

There are also notable oversights, such as the ‘all for one’ approach to negotiation of their contracts in recent seasons, a novel tactic that reflects the true collective nature of the show, the solidarity of the actors and the financial giant that “Friends” became for NBC and production company Warner Bros (which, like CNN and HBO Max, is a unit of WarnerMedia).

On the other hand, “Friends: The Reunion” reflects both the current media era and the period in the mid-1990s in which the series was born, when a sitcom hit of this magnitude was still possible on the network. . Given the need for recognizable content and titles, what could have been a Museum of Television and Radio retrospective has become highly promotable ammunition for the streaming war.

The special was shot in April and covers considerable ground that could inspire several episode titles similar to those of “Friends,” but after all, there are some very valid contenders: “The One Who Celebrates The Series,” “The One Who promotes a streaming service ”,“ The one who tries too hard ”and, at best,“ The one who gives fans a lot of what they wanted ”.

“Friends: The Reunion” premieres May 27 on HBO Max.

1 thought on ““Friends: The Reunion” is the episode that is full of nostalgia”