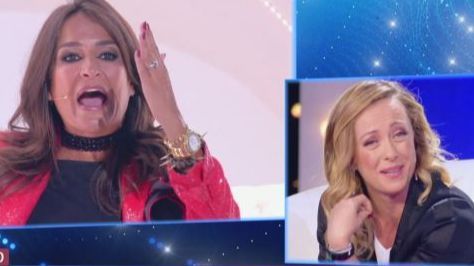 They rescue the anger that the next Italian prime minister and the Spanish television had on a set, 3 years agoThe far-right leader criticized the controversial former reality show contestant for bathing in protected sources in Italy: “What are you going to do in your country! The 45-year-old politician has a journalist partner, Andrea Giamburno (Mediaset Italia), and has been on many television sets proclaiming her far-right ideas. Today it has transpired that in one of them, the next Prime Minister of Italy had a harsh confrontation with the Spanish Aída Nízar: Meloni called Aída Nízar “indecent” and “ignorant” Social networks have rescued this moment of 2019, when Meloni criticized that Aída Nízar, known in our country for her participation in reality shows like Big Brother 5, would have bathed twice in two protected Italian fountains, the Trevi Fountain and the Fountain of the Four Rivers in Piazza Navona.”It is an indecent spectacle Aída Nizar, former Big Brother contestant, after having bathed in the Trevi Fountain in June, has decided this time to take a bath in the Fountain of the Four Rivers in Piazza Navona. For this ignorant I propose a year of work in benefit of the community by cleaning the streets of Rome. That way, perhaps you will begin to have respect for our capital,” said the leader of the Italian far right. She did so after seeing the images of Aída Nízar, also known in Italy as p for her controversial participation in Grande Fratello (the Italian Big Brother), bathing in 2018 in the Trevi Fountain (Rome) shouting “I love my life, Italy loves me”, for which she was fined 450 euros. Face to face on a television set The passage of Aída Nízar by Grande Fratello, where, as in Spain, she experienced several confrontations with contestants, made her a popular character in the country, coming to sign as a collaborator in programs such as Domenica Live: Nízar and Meloni The faces were seen in a live debate on the Live: Non è la D’Urso program on Canale 5 (Mediaset). “You mentioned my name in vain… Don’t do it,” the Arab-born woman from Valladolid told him, asking him to speak in English. “Do you speak any language, can you speak English?” “Berlusconi was wrong about you, you spit on the plate where you eat [por estar ambas en el canal propiedad de Berlusconi], you are very interested in me”, said Aída Nízar, while attacking politics by comparing herself to her. ‼️The winner of the Italian elections 🇮🇹 and possible Prime Minister, Giorgia Meloni 🔵, has had public confrontations with… Aída Nízar 💁 🏻‍♀️🖊️ (GH / GF contestant). This is how they discussed a few years ago on television.https://t.co/EqNRLwPZK9pic.twitter.com/U3vuedK68y— EM-electomania.es (@electo_mania) September 26, 2022 “I was the most important young politician in Spain…” Do you know why I left politics, what should you do too? Because I don’t photoshop on Instagram!” Nízar shouted, also accusing her of having “destroyed the Ministry of Youth”. Meloni tried to escape from the Spanish woman, one of the guests invited that day to interview her. “I have not come here to be a clown”, he tried to settle, although finally he got into the rag: “I am going to explain how politics works in Italy…”, he tried to intervene, but Aída would not let him speak, so He ended his presentation by alluding to the controversial bathing in the iconic fountains of Italy.”He has done it to give himself visibility, let him go bathe in the Spanish fountains!”, Meloni finished, while the presenter of the program turned Aída’s chair, to stop giving voice.