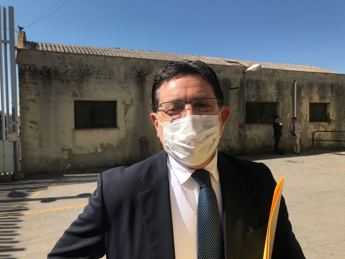 (from the correspondent Elvira Terranova) – Renato Schifani is not in the classroom. He is in Palermo waiting for the results of the regional elections. According to the exit poll, the candidate for the Presidency of the Sicilian Region for the center-right would have a clear advantage over Cateno De Luca, in a fork that gives him a winner between 37 and 41 percent. And while the former President of the Senate awaits the verdict of the regional elections, about 130 km away is the new hearing of the trial that sees him accused in the debate on the so-called ‘Rising System’. A hearing lasted only a little less than an hour, because the witness scheduled for today, an official of the Anti-Mafia Investigative Directorate, did not appear for “urgent commitments”. But it was a hearing in which the prosecutor Maurizio Bonaccorso raised a very specific alarm: “There is a real risk of prescription on most crimes”. This is why the Prosecutor asks “to thin out the list of witnesses” and “to program the texts to avoid that justifications can be presented for subsequent hearings”. “We need to know which are the debating statements that can be used”, explains the magistrate. Today, during the brief hearing, the exceptions “on the unusability of the evidence taken in the first section and on their repetition” were formalized. Maurizio Bonaccorso therefore asked the Court to “modify the calendar already prepared” and “we ask that two weekly hearings be scheduled for the trial to save what can be saved”. The President Francesco D’Arrigo replied immediately: “The court is available to set two hearings a week, but the judges are engaged in other hearings. Therefore, either the presidency of the Court assigns an additional judge to the section, composed of 5 non-judges. you are, or it will be difficult. “In the last hearing, the President of the Court, Francesco D’Arrigo, decided to unify the two sections of the Montante trial. Which has become a sort of ‘Maxiprocesso di Caltanissetta on the’ Montante System ‘which sees politicians, entrepreneurs, police forces, but above all him, Montante, still absent today. A decision that of D’Arrigo, arrived despite the opposite opinion of accusation and defense of the two trials that fear an extension of the times for sentences. In the ‘processone’ of Caltanissetta, which is celebrated in the bunker hall of the Malaspina prison in Caltanissetta, in addition to the former anti-mafia champion Antonello Montante, former president of Confindustria Sicilia, the former president of the Region Rosario Crocetta, the former councilors Linda Vancheri and Mariella Lo Bello, the former commissioner Irsap Maria Grazia Brandara, the entrepreneurs Giuseppe Catanzaro, Rosario Amarù and Carmelo Turco, Vincenzo Savastano deputy superintendent at the time of the events of the Police at the border office of Fiumicino , Gaetano Scillia head of the Dia center in Caltanissetta from 2010 to 2014, Arturo De Felice, director of Dia from 2012 to 2014, Giuseppe D’Agata, colonel of the carabinieri, and Diego Di Simone Perricone, former head of security of Confindustria. Former director of secret services Esposito is also on trial On trial also the former director of Aisi Arturo Esposito, the foreman of Aisi Andrea Cavacece, the ” king of supermarkets ” Massimo Romano, the tax attorney Massimo Cuva, the colonel of the carabinieri Giuseppe D’Agata, the trade unionist Maurizio Bernava , the entrepreneurs of the security sector Andrea and Salvatore Calì, Rosetta Cangialosi, Carmela Giardina and Vincenzo Mistretta (three employees of Montante), the policeman Salvatore Graceffa; the manager of Confindustria Carlo La Rotonda; the major of the Guardia di Finanza Ettore Orfanello; the lieutenant Mario Sanfilippo and the colonel of the carabinieri Letterio Romeo. The former anti-mafia champion Antonello Montante, according to investigators, would have set up a real ‘system’ of power, conceived and implemented “thanks to a branched network of relationships and complicity interwoven with various characters included at the top of the various sectors of the institutions “. Furthermore, it would have been at the center of a dossier activity carried out, also thanks to excellent complicity, through access to the law enforcement database and aimed at blackmailing “enemies”, conditioning political and administrative activities and acquiring information on investigations to his load. Thanks to his contacts and the influence he exercised in some institutional environments, the entrepreneur would have created a sort of spy network: in exchange for favors, members of the police would have given him information on investigations against him, straight on ” enemies “, allowed to have piles of dossiers on influential people. According to the investigators, Montante would have been the head of a sort of “parallel government” in Sicily, and would have “directed” the political and administrative life of the island, placing his men in strategic positions. The Court ‘Need to proceed quickly’ During today’s hearing, President D’Arrigo explained: “this process needs to proceed quickly, so only in cases of truly absolute impossibility can the witnesses be exempted from the hearing. The prosecutor must point out this circumstance, we have skipped other trials to make this timetable. The commitments, however burdensome, can be avoided. For this time, given the limited time compared to the last hearing, we can avoid making further investigations. But from the next hearing, specific checks will be made on the non-attendance and it will be assessed whether the witness was legitimately prevented or not. And this will apply to all witnesses, including those who report. The hearing was therefore postponed to next 24 October. The witness who was to be heard today will be heard.