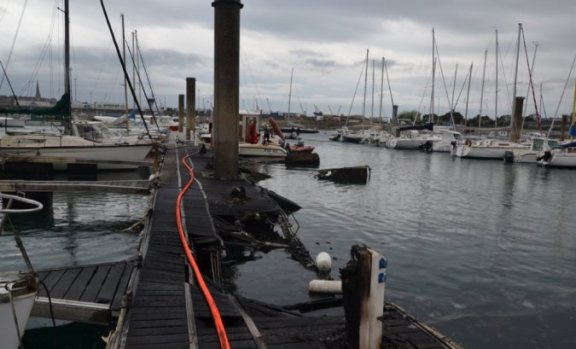 In an email signed “FLB” (Front de Liberation de la Bretagne) received by our editorial staff, fifteen fires and acts of vandalism committed all over Brittany, from April 2017 to August 2021, “against second homes or profiteers from the tourism industry ”.

These dates refer in particular to fires in secondary houses which were unoccupied at the time of the events. But also to fires having ravaged a public transport company or 22 boats on the Bas Sablons pontoons, in Saint-Servan (35).

The leaflet, which ends with these words: “Support for the Bonnets Rouges victims of French judicial harassment!” Free Brittany! Is signed Anna Lagadec – probably a pseudo – for the Kuzul Meur, the great council.

What credit can be given to these claims? Several inconsistencies have apparently escaped the author or authors of this tract. They talk about the fire of a manor in Trédarzec (22) on August 28, 2021. The date does not correspond, the incident took place on October 28 and “the experts concluded that an accidental fire”, says t -on in town hall.

Same answer in Saint-Malo, where at the port of Bas Sablons, 22 boats had been destroyed by flames on April 30, 2017. Fire also claimed in the leaflet. “The origin of the fire was located at the level of a battery, explains one in town hall, the expert report in hand. It was noted that the equipment overheated and melted at the clamping lugs. The experts were unanimous, it was an accidental fire which spread to other boats ”.

Another inconsistency concerns the fire of a large construction machine working on the RN 164 near Rostrenen (22). A few days after the facts, our colleagues from Poher Hebdo had received a letter signed FLB claiming the facts. This fire simply disappeared from the list that reached us on Wednesday!

In Pont-Aven (29), on the other hand, there is no doubt about the voluntary nature of the damage committed on two real estate agencies last June. Windows had been smashed, probably with a baseball bat. And FLB acronyms had been tagged on the storefronts.

If the FLB is really behind some of these crimes, it has not been talked about for forty years. From 1966 to 1981, the date of its real decline, this independence organization had claimed responsibility for several dozen attacks. Advertising, among others, the TV transmitter of Roc’h Trédudon in 1974, a wing of the Palace of Versailles in 1978 or the rectorate of Rennes.