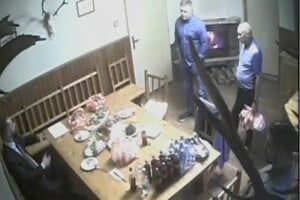 The chairman of the committee, Juraj Krúpa, called him to 12:00 on Tuesday.

BRATISLAVA. The Committee of the National Council for Defense and Security will hold an extraordinary meeting on Tuesday. He will talk about the topic of media coverage of police recordings. TASR was informed about this by Peter Dojčan from the media team OĽANO.

The chairman of the committee, Juraj Krúpa (OĽANO), called him at 12:00. The Minister of the Interior was also invited to the meeting Roman Mikulec (OĽANO) and the Police President Stefan Hamran.

Related article Fico falsified the test and did not report the theft, Žilinka sends smileys. What did the videos show? Read

1 thought on “The Committee on Defense and Security will hold an extraordinary meeting on the case of recordings – SME.sk”