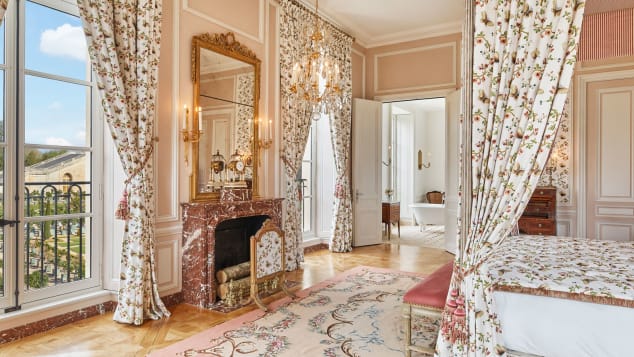 (CNN) – Do you want to live like royalty during your next vacation? The first hotel in history located on the grounds of the Palace of Versailles has just opened its doors, giving travelers the opportunity to stay in the heart of one of the most opulent addresses in the world.However, guests will have to shell out at least € 1,700 per night (just over US $ 2,000) to have the privilege of staying here.

Le Grand ControlConsisting of 14 rooms and suites, it is housed in three historic buildings dating from 1681 that have been restored by architect and interior designer Christophe Tollemer.

Guests can also marvel at the Piece d’Eau des Suisses, a 13-hectare ornamental pool excavated by the Swiss Guards between 1679 and 1682.

The hotel’s name comes from the Grand Controle building, built by Louis XIV’s favorite architect, Jules-Hardouin Mansart, which is one of the three buildings it occupies, along with Le Petit Controle and the Pavillon.

Le Grand Controle, which is the sixth property of the Airelles luxury hotel brand, features a Valmont spa with a 15-meter indoor pool.

Worthy of a monarch

The hotel restaurant, run by celebrity chef Alain Ducasse, offers a menu inspired by Louis XIV, who ruled France for 72 years, as well as classic French dishes and an afternoon tea dedicated to another of the palace’s famous residents, Maria. Antoinette.

Each of Le Grand Controle’s individually decorated rooms and suites is named after a person closely associated with the property, such as statesman Jacques Necker, who was Louis XVI’s chief financial officer, and his daughter, novelist Madame of Stael.

Guests will have a dedicated butler, access to boats and golf carts, as well as access to the palace and private visits to the Queen’s Hamlet (Le Hameau de la Reine), a haven where Antoinette took walks and entertained her friends. closer, along with “never seen” residential areas used by the monarchs.

A number of exclusive experiences can also be booked, such as after-hours access to the Hall of Mirrors, which offers a unique opportunity to explore the famous hall and its 357 mirrors without the crowds.

The launch of Le Grand Controle, which has been delayed due to the covid-19 pandemic, will undoubtedly be a delight for those who wish to wake up in the facilities of this world-renowned place declared a World Heritage Site by Unesco.

In the 17th century, Louis XIV transformed this former hunting lodge into an extensive 63,154-square-meter estate with 700 rooms.

The palace, which was the seat of royal power before being confiscated during the French Revolution, required the labor of 30,000 workers for about 50 years.

The palace remains a source of fascination and wonder so many years later, and films such as Sofia Coppola’s “Marie Antoinette,” starring Kirsten Dunst in 2006, and the television series “Versailles,” which ran from 2015 to 2018, they only increase their appeal.

The Palace of Versailles It reopened to the public earlier this year, with a mandatory time-to-enter process.

1 thought on “The Palace of Versailles opens its first hotel”