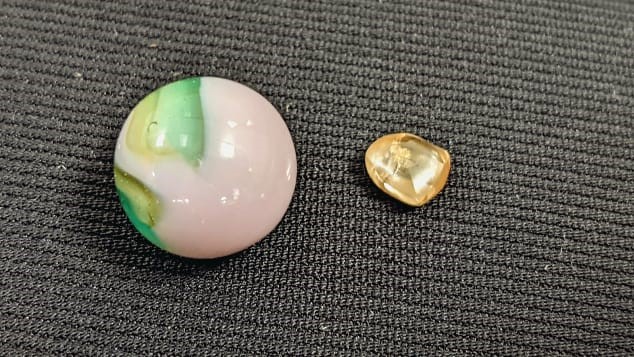 He extracts a diamond to ask his girlfriend to marry him 0:50

(CNN) – A man from Washington dreamed all his life of finding a diamond in the rough to create a unique engagement ring for his future wife, but he didn’t know it would come true.Christian Liden told CNN that the idea of ​​mining his own gemstones for an engagement ring got into his head in high school, but he had no idea how to do it. As he grew older, he discovered how difficult it is to find rough gemstones in America.

However, when a coworker told him about Crater of Diamonds State Park in Arkansas three years ago, he knew his dream could come true. He had been dating his girlfriend, Desirae, for two years, and he knew the ring would be for her.

“That’s when I started planning the trip and planning the possibility of doing it, and finding out if it was possible to do it, so I started researching diamonds,” explains Liden.

He watched videos of those who were successful in finding diamonds in the park, and he tried to get as much information as possible before deciding to plan his trip. His friend Josh, who knew Liden’s dream from the beginning, decided to join the adventure.

The 2.20-carat gem is the largest to be found in the park since last October, when a visitor from Fayetteville, Arkansas, discovered a 4.49-carat yellow diamond.
Credit: Arkansas State Parks Office

As planned, Liden built his own mining rig while his girlfriend was at work, so he wouldn’t have to explain the true purpose of the road trip.

Liden planned to propose to Desirae when she got back and didn’t want to give her any clues.

On May 1, Liden and Josh began their adventure and made their first stop in Montana to mine sapphires, just in case they were left empty-handed when they reached the park.

After a successful first dig and a day in Yellowstone, the two arrived in Arkansas on May 7, hoping to find a needle in a haystack.

The next two days were unsuccessful, even after trying to get to intact material. The next day, they decided to try a different approach and mine only the gravel surface.

“It was towards the end of the day, it was the last two cars … and we just started putting materials on the racks,” he said.

Then a surprising thing happened: when he turned his tool, there was a yellow diamond over two carats on top of it.

“I immediately started shaking… I was shaking a lot. I motioned for my friend to come closer… and waved my hand and he searched, ”Liden said.

He was in such a state of shock that he let Josh take the gem and put it in a ziplock bag because he was afraid it would drop.

I never expected something like this. I was just hoping to find one, just a small one, so I could put it on the ring and say ‘hey, I took that diamond out,’ “Liden said.

Christian and his new fiancée, Desirae, after proposing to her.
Courtesy of Christian Liden

They immediately went to the discovery center to report what they had found, and staff confirmed the size of the yellow diamond.

The 2.20-carat gem is the largest to be found in the park since last October, when a visitor to Fayetteville, Arkansas, discovered a 4.49-carat yellow diamond, according to a Diamond Crater press release. State Park.

“Mr. Liden’s diamond is light yellow in color, with a triangular shape and a shimmering, metallic luster. Like most diamonds in the park, it contains some inclusions, which makes it unique, ”said Deputy Superintendent Dru Edmonds.

The day after his return, Liden and his girlfriend went out looking for mushrooms, and during their walk in the woods Liden pulled out the diamond and proposed to her. She said yes.

The two are looking for someone to design and assemble the ring made up of the gems Liden mined on the trip. He says they are in no rush.

1 thought on “A man traveled across the country to mine the diamonds for his girlfriend’s engagement ring and found a 2.2-carat beauty”