The police addressed a hard message to seniors: They are falling into delusion and social networks! THIS is proof – Topky.sk 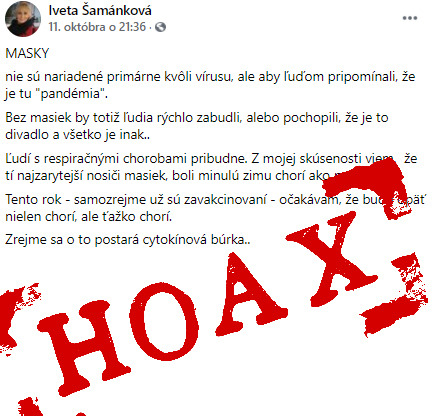 The police pointed out that the account entitled “Iveta Šamánková” publishes a lot of misinformation on a daily basis. These include social network status, in which they claim that “Masks are not ordered primarily because of the virus, but to remind them that there is a” pandemic. ” Without it, according to her, people would quickly forget or understand that it is a theater.

In this particular example, according to the police, however, a woman literally deceives in almost every single word. They therefore point out that “masks”, in other words, drapes, are not ordered as a “reminder” of a pandemic, but as a prevention.

They also pointed out that no one in Slovakia wants to wear “masks” indefinitely, but we want to follow the example of countries such as Sweden and Denmark, where, thanks to high vaccinations, they cancel almost all extraordinary measures. “This account without any evidence deceives when it states which group was the first sick and falsely predicts what will happen. It is a type of very simple author who fits into the role of an omniscient authority without real evidence,” pointed out.

In this case, it is not a mass-distributed hoax. But the problem, according to the police, is the account as such. “The cadence of disclosing disinformation suggests that the owner of this account must spend hours a day on the computer, which significantly contributes negatively to the development of his mental health and social life.” stated.

According to them, the activity of this account is proof that delusions and social networks fall mainly into higher grades. “Older people are very common spreaders of hoaxes, whether someone likes it or not. It is therefore very important that such people are interested in those closest to them and try to break them away from virtual reality and bring them back to real life. We are sorry for the older internet users, but in the end we are adults who have to take responsibility for their actions in public. “ pointed out.

One thought on “The police addressed a hard message to seniors: They are falling into delusion and social networks! THIS is proof – Topky.sk”