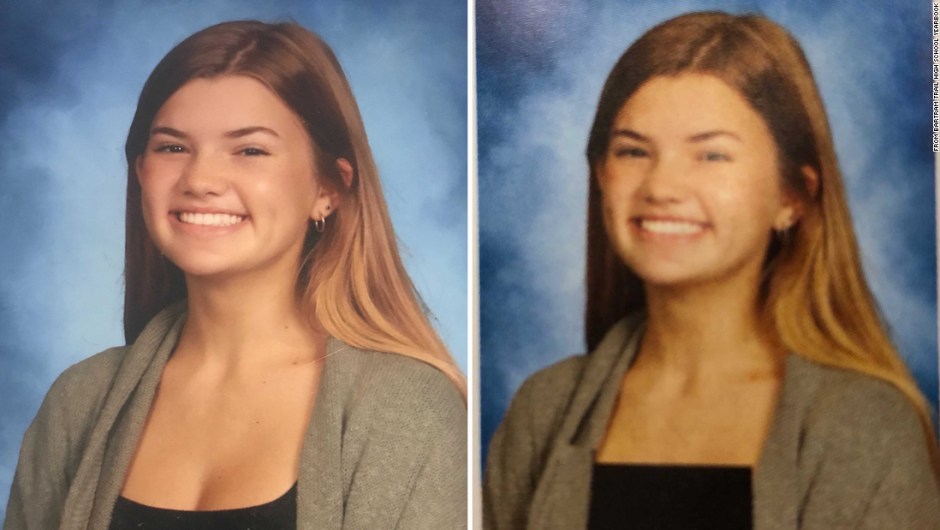 (CNN) – Opening the yearbook for the first time is usually an emotional moment. However, this year at a Florida high school some students were shocked after seeing their portraits edited.

When Riley O’Keefe, a student from Bartram Trail High SchoolShe saw her picture in the yearbook, noticed a black bar had been added to cover her breasts more.

“I couldn’t believe they printed the yearbook looking like that,” O’Keefe, 15, told CNN. “And then I started flipping through the yearbook and I saw more and more girls with edited breasts,” he said.

The young woman sent her mother a photo Wednesday from school in St. Johns, Florida.

“I know she has worn (that outfit) to school hundreds of times because it’s her usual outfit,” her mother, Stephanie Fabre, told CNN on Monday. Fabre believes that the outfit complied with the district’s dress code, which states that girls’ blouses “must cover the entire shoulder and must be modest and not reveal or distract.”

In all, 80 photos of female students were altered in this year’s yearbook, the district’s chief of community relations, Christina Langston, told CNN on Monday.

“It is disappointing to be addressing the status of student photographs in the Bartram Trail High School yearbook,” St. Johns County School District Superintendent Tim Forson said in a statement to CNN. “Certainly there was never an intention to embarrass or embarrass a student because of the clothes they wear. Unfortunately, we are learning a valuable lesson about the importance of the process and understanding that the intention is not always the result.

The institution’s website has a disclaimer that says that if the student portraits in the yearbook do not match the district’s code of student conduct, they may be “digitally adjusted.”

“The yearbook coordinator made the decision to edit the photos based on her assessment that the women did not comply with the dress code,” Langston said in an email to CNN.

The superintendent said the review before the school decided to edit some of the images was insufficient. He called the staff member involved an “exceptional educator” and said there will be changes in the way content is viewed in yearbooks for years to come.

What the dress code prohibits

The student dress code prohibits “immodest, revealing, or distracting” clothing, per the district’s code of conduct. However, each principal has “final authority” as to whether the clothing a student wears is appropriate or not, the code says.

Anger over edited photos is part of a bigger problem, Fabre said. According to her, what should be reviewed is the district’s dress code due to the inequality in the way it considers women’s and men’s clothing.

“It comes with a much bigger problem of gender discrimination and these girls being attacked and sexualized by telling them their clothes are wrong,” she said. “There is inequality in their dress code.”

In the section that refers to all students, the dress code says that “they are prohibited from wearing clothing that exposes underwear or that exposes parts of the body in an indecent or vulgar way.”

In the “All Students” section, it says, “No tank tops or tank tops except in PE classes.”

The specific section for girls says that they cannot wear skirts that are more than 10 cm above the top of the knee. «Revealing garments, pajamas and lingerie are not accepted. Undergarments must not be exposed. Curling irons and excessive makeup will not be allowed, ”he adds.

While the dress code for both girls and boys has three entries, the list of rules for boys is shorter. They say that pants “must be worn at the waist.” You cannot see underpants or underwear. Mustaches and beards must be neatly trimmed. Pajamas and revealing clothing are not allowed.

However, some parents say that the dress code is outdated.

Fabre and other parents call for the district’s dress code to be changed.

“It’s old-fashioned,” Fabre said, referring to the fact that students are not allowed to wear tight shorts. “I mean, it’s 2021,” he said.

“It should be the same for everyone,” Fabre said. “There needs to be a systematic change in the dress code.”

Adrian Bartlett, another mom who hopes the school will change the dress code, said her 15-year-old daughter Brooke also noticed her photo had been changed in the yearbook.

“They’re telling my daughter that she should be ashamed of that part of her body, that she should cover it up,” Bartlett said. “I think it is a completely wrong message for young adolescents who are already going through the age of body shaming and trying to understand themselves and then feel comfortable with themselves.

Brooke has had to deal with mental health and self-image issues, said her mother, who asked that the girl’s last name not be used. The pandemic has made things worse, he said.

His daughter was hospitalized and is in treatment for mental health issues, Bartlett said. Brooke has come a long way and only recently began to feel comfortable going to school in clothes other than baggy sweatshirts, she said.

“Florida is hot 90% of the year,” said Bartlett. “However, in recent years we’ve seen a lot of our kids wear these big, baggy sweatshirts 24/7, whether it’s winter or summer.”

While Brooke initially laughed at the terrible Photoshop editing of her portrait, her mother is concerned about the long-term effects this may have on teens.

“I’m concerned about some of these kids that they may not be handling it as well as Brooke and how this could really be harmful to their long-term mental health,” she said.

Like Fabre, Bartlett believes the school’s dress code is too strict on women, she said. She explained that she has had a hard time finding clothes that meet the dress code and that when her daughter finds an item that does, she doesn’t always feel good about it.

“That affects their self-esteem and creates even more body-related problems,” he said. “There has to be some kind of middle ground where our girls can feel comfortable going to school, feel confident, and it’s appropriate.”

Some students argue that the code protects males

Some students and their parents want the inequality in the code for girls and boys addressed.

“I really hope the school takes a hard look at how everyone views women’s bodies and takes a leadership role in trying to change that vision,” O’Keefe said.

For her the problem goes beyond the dress code.

“It’s also about how people view our bodies,” he said. “For example, if a girl has a smaller breasts compared to a girl with a larger breasts, the girl with the larger breasts is much more likely to be subject to the dress code and it is not fair. We should all be able to wear the same blouses, the same clothes and not be afraid of the dress code being applied to us.

“We tell our girls to cover up and dress modestly to protect the boys,” she said. I think that’s the wrong message. Everyone should be responsible for themselves and our girls should be able to dress in a comfortable and respectful way.

Parents aren’t just looking for an apology – they want lasting change that benefits students in the future, Fabre said. For her the apology is “100% necessary”, but “the key here is that there must be a systematic change in the dress code and the consistency of how it is applied.”

In addition to a code change, O’Keefe hopes the school will educate staff members and male students.

“I hope they teach men that there is nothing wrong with our bodies,” he said. It’s natural, just like yours. There is no reason why our body should be censored and theirs is fine.

Fabre said she and other parents attended a school board workshop Tuesday where the dress code was discussed.

Changes to the student code of conduct were proposed at the workshop, including modifications to the dress code, Langston said.

“There was quite a lot of public comment,” he said. The school board president said he wanted a “committee to be set up to review the overall dress code,” Langston said.

Langston explained to CNN that no action is taken at workshops, only at school board meetings held on the second Tuesday of each month. There is a vote on the code of conduct scheduled for June 8.

The school offers a full refund to parents who contact the yearbook, Langston said. Yearbooks that already have many entries will only receive a partial refund.

CNN’s Tina Burnside and Alisha Ebrahimji contributed to this report.