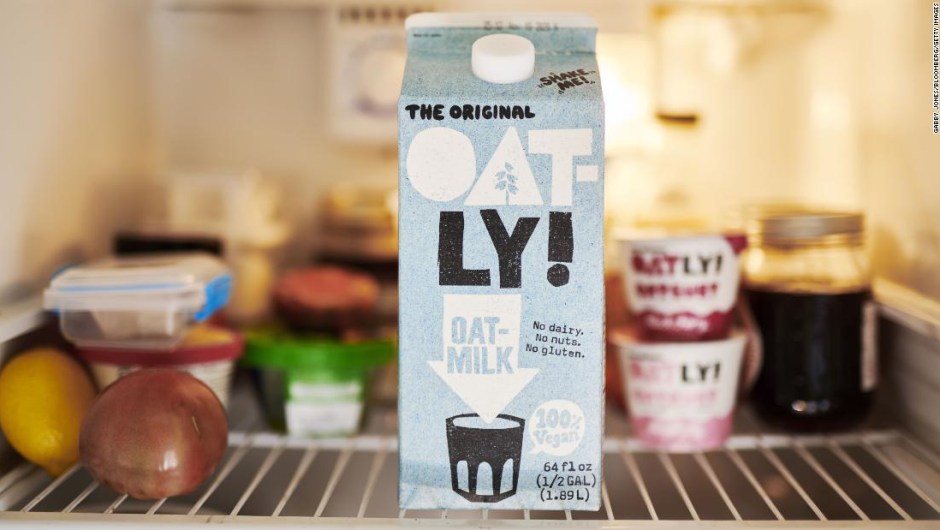 London (CNN Business) – Fast-growing Swedish oat milk brand Oatly is heading for a splendid initial public offering (IPO) in New York that will test investor demand for companies that make plant-based foods.
The company, which will be listed on the Nasdaq this Thursday, set the price of its shares at US $ 17 each, which is a valuation of US $ 10 billion and the collection of more than US $ 1.4 billion from the sale of new shares. and existing.

Oatly, which produces a milk substitute made from oatmeal, has grown rapidly in recent years. Its flagship product is now sold in 60,000 stores and more than 32,000 coffee shops in more than 20 countries.

The company’s success is an example of the growing demand for plant-based foods, driven by Millennial and Generation Z consumers concerned about the impact of animal products on the environment.

The trend has prompted newcomers such as Impossible Foods Y Beyond Meat, which skyrocketed on its debut on the stock market in 2019, while also prompting established food companies such as Nestlé and Target to launch plant-based ranges.

Oatly, which launched its first product in 2001, made plant-based oatmeal long before dairy alternatives were all the rage. But it wasn’t until the company appointed a new management team in 2012, led by businessman Toni Petersson, that sales really started to take off.

The brand is famous for its marketing and its peculiar packaging. Their packaging makes ironic claims about the benefits of oat milk and the drawbacks of animal products.

Following poor reviews for a low-budget ad at this year’s Super Bowl (featuring Petersson playing a keyboard and singing “Wow! No Cow”), the company gave away T-shirts with the caption “I totally hated that. Oatly commercial ”(“ I hate that Oatly commercial ”).

Oatly, which describes itself as the world’s largest oat milk company, also manufactures ice cream, yogurt, cooking cream and spreads. But it is best known for its milk, which costs more than similar alternatives made with rice and soy, and which Oatly has carefully positioned as the product of choice for the most demanding consumers.

For example, in the United States and the United Kingdom, it reached out to professional baristas and specialty coffee shops, winning over coffee lovers with its barista edition “fully foamable” oatmeal drink.

In 2018 it followed a similar strategy when launching in China, where it has an exclusive partnership with Starbucks. Sales in Asia increased fivefold between 2019 and 2020, according to a prospectus filed with the U.S. Securities Commission last month.

“Global demand for Oatly products has far exceeded our supply,” the company said. “As we continue to scale, we have a significant opportunity to meet unmet demand and build on the success of our brand to expand our product portfolio.”

Plant-based dairy industry retail sales were estimated at $ 18 billion in 2020, according to market research firm Euromonitor, accounting for about 3% of the global dairy industry.

Oatly has four factories, two of them in the United States, and another three planned or under construction in Singapore, China and the United Kingdom.

The investment valued Oatly at $ 2 billion, although the company is not yet profitable. Although sales more than doubled from 2019 to $ 421.4 million last year, it posted a loss of $ 60.4 million while investing money in product development, new factories and marketing.

Unilever-owned Ben & Jerry’s offers dairy-free versions of its ice cream range, and the consumer goods giant aims to increase sales of plant-based meat and dairy alternatives five-fold over the next six years.

Earlier this month, Nestlé, the world’s largest food company, announced the launch of a pea-based milk alternative called Wunda. The product will be launched in France, the Netherlands and Portugal, and is scheduled to roll out to other European markets. This will put her directly against Oatly, who makes most of her income in Europe.

–Danielle Wiener-Bronner contributed to this report.