The newcomer’s goal from Liptov came late, the dramatic duel between Ružomberok and Trnava had no winner – Športky

RUŽOMBEROK – Footballers MFK Ružomberok drew in Saturday’s match of the 5th round of the Fortuna League with FC Spartaka Trnava 0: 0.

The home team had a huge opportunity to open a match account in the 3rd minute. Kostovinov’s pass to Spartak’s big lime was caught by Mikovič’s hand, but Dominik Takáč’s goalkeeper scored a penalty for Brenkus. In six minutes, the home team was fired by Dalibor Takáč and his namesake pulled a great intervention between the Trnava bars. In the 12th minute, Krajčírik presented himself in a similar way when he pulled Bamidel with his left hand. In the 33rd minute, the goalkeeper MFK had his hands full with a pungent shot by Ristovský, who deftly shot from the turn. After 40 minutes, J. Masla sent a free kick in high over the penalty box.

In the 54th minute, Kostadinov sent an artificial ball into the penalty area Spartak and the running Gerec fell close to the goal in the fall. In the 70th minute, Bamidele finished in the immediate vicinity and J. Maslo ratified Liptákov. After the subsequent corner kick, Twardzik’s head went right next to him and then Grič had a great opportunity, but Krajčírik came out with a shield. In the end, Bukata hit the Ružomberok crossbar. A solid match in offensive mode, in which the back widths exceeded offensive campaigns on both sides, ended in a division of points.

Peter Struhár, Ružomberok: “Whoever scored would win today. We were better at the start of the match, we created three chances in the first half, the visiting goalkeeper kept his team. We were preparing for Trnava all week, we knew about its strengths. Introduction of the second half “Time went by, we didn’t make it to the break situations in the middle of the pitch, we lost the balls easily and with poor quality and thus we didn’t get to the finals. In the end, the guests had a chance and a very good Krajčírik’s intervention saved us a point.”

Michal Gasparik, Jr., Trnava: “We tried to come ready to take three points, which we did not succeed, so we are disappointed. In the first half it was played up and down, there were enough losses, while we did not have the necessary quality in the wing areas to catch up with our In the second half we had more chances, we pushed into victory, but in the end we were also lucky when the ball bounced off the line from the crossbar, I already saw the video and it was supposed to be a penalty kick, because this situation was preceded by a hand. “

The newcomer to Zemplín did not succeed

Footballers MFK Zemplín Michalovce won in the 5th round of the Furtuna League over the newcomer of the competition MFK Tatran Liptovský Mikuláš 2: 1.

The first half did not bring a very attractive football and the spectators witnessed inaccurate combinations for long minutes. In the opening quarter, the home players had a slight advantage, but they could not create a goal opportunity. The events of the first half graduated in its conclusion. A free kick just outside of the visitors’ penalty area after 41 minutes could have resulted in another goal, but Šváček got a hand out and tipped the ball over the bar. The goalkeeper of the guests kept his team at the chance of Trus, who could not shoot him up close, so the first half ended without goals. 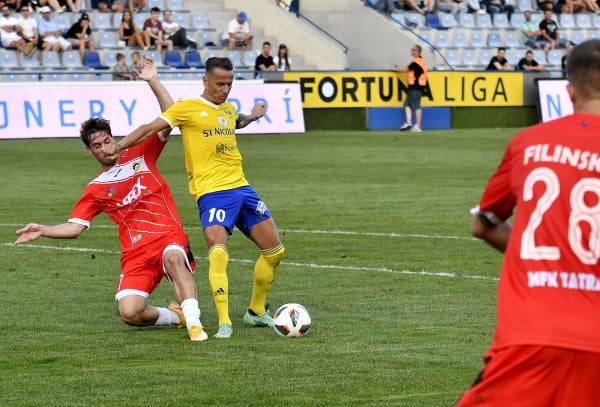 The score changed in the 51st minute, when Šváček shot Kanu – 1: 0. The home team then gained self-confidence, revived the games room and did not allow the astonished guests to develop offensive actions. In 20 minutes, the home captain Žofčák presented a cross shot from the sixteenth mark and surprised Šváček – 2: 0. Švec had a fantastic opportunity to put Švec up another goal 83 minutes into the match, but he fired just over the crossbar. From the 90th minute, Michalovce striker Zoran Zahradník made his league debut, becoming the second youngest player in the history of the highest competition at the age of 16 and two days. The final form of the result was given by Švec in the set time, who shot the home goalkeeper Száraz – 2: 1.

Marek Ondrík, assistant coach of MFK Zemplín Michalovce: “It was a difficult match for us, because after three losses we urgently needed points to not get even more pressure. The opponent showed its strength, it was especially dangerous from breaks. We caught the introduction of the halves, which was important. We are happy to win three The boys did their best, although they did not avoid mistakes. “

Marek Petruš, coach of MFK Tatran Liptovský Mikuláš: “We lost after our best performance of the season, so I’m sad. Luck turned away from us today, but congratulations to the home team for winning. I don’t think we were a worse team, but we’re not playing for it. We’re moving on, but I think these lost points will still bother us. I praised our team for the game shown, but we play for points in the league and we did not get them today. “

Doctor who confronted the shooter in Laguna Woods is considered a hero by the authorities 0:53 (CNN) -- In...

While the Russian soldier tried since Wednesday for "crime against humanity" asked forgiveness at the bar, the Russian forces,...

Sylvie Retailleau in Higher Education: “It’s a change of mind that is not a change of course”, worries the Unef – franceinfo

On the eve of its last match of the season against FC Metz, PSG announces the departure of striker...

Ice Hockey World Championship: Juraj Slafkovský: I think we have calmed down all two-week coaches ŠPORT.SKView All about the...

Doctor who confronted the shooter in Laguna Woods is...
World

While the Russian soldier tried since Wednesday for "crime...
World

Sylvie Retailleau in Higher Education: “It’s a change of mind that is not a change of course”, worries the Unef – franceinfo

On the eve of its last match of the...