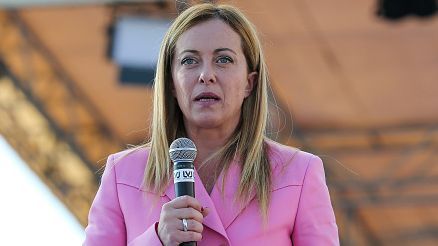 She began reading the epic novel at the age of 11 and since then her speeches have been recreated in a mythical and traditionalist era with its own symbols and heroes, free from the fascist taboo. Meloni calls for a naval blockade against illegal immigration, she is a defender of NATO, of Ukraine and advocates for the natural family She is about to become the first female prime minister of Italy, she is 45 years old and her speeches are inspired by “The Lord of the Rings”. Giorgia Meloni, Member of the Chamber of Deputies, heads the party The far-right Brothers of Italy. Determined, sarcastic and adept at brushing aside her enemies, she at times gains the upper hand over her opponents and predicts herself to be the leader with a comfortable victory in this Sunday’s general election. Concluding the candidate’s electoral campaign, in front of a mass of supporters who waved the flags with great enthusiasm in the Plaza del Popolo, last Friday Meloni was presented by the actor and comedian Pino Insegno, in the most epic way possible, quoting British author JRTokien and “The Lord of the Rings”: “The day of defeat will come, but this is not it,” exclaimed the popular artist in a solemn and triumphant tone. I am here to introduce an extraordinary woman, the first female president of an Italian party and the first female president of a European party.” Meloni seemed fresh from Middle-earth. Politician and also a journalist, she has never hidden her unbridled passion for hobbits, elves and dwarves.Fascination for “The Lord of the Rings”When the leader of the radical right was a young militant of the Italian Social Movement from a poor neighborhood and worker of Rome, Meloni and his sympathizers surrendered to the works of Tolkien. Under the nicknames of Frodo and Hobbit she was gaining a following in political militancy. Many considered that her fascination with that epic fantasy novel that she began reading when she was 11 years old could be attributed to a stage of her own age. But the passage of time has not diminished the spirit of Meloni who, on the contrary, continues to recreate herself in a mythical and traditionalist era with her own symbols and heroes, free from fascist taboo. At age 15, she became involved in politics after registering with Fronte della Gioventu (Youth Front), the youth section of the Italian Social Movement (MSI). “No one expresses better than Tolkien what we conservatives think,” Meloni has said. And it is that, for her, literary creation is a sacred book. “I don’t consider ‘The Lord of the Rings’ to be a fantasy,” Italian politicians have said. -ri and was described as “little dragon from the Italian undernet”. By then she had already founded the GliAntenati student movement and after being a member of the National Alliance, she became the national president of her student movement, “Azione Studentesca”. Meloni is not intimidated by anyone or anything and her involvement in politics has been generating more and more interest among the Italian population. She learned the trade through student politics and stayed true to her epic and fictional inspirational principles. Recently, one of his political conferences was titled “Atreyu”, the name of the protagonist of “The Neverending Story”, a story known above all in its cult film version of the 1980s, where a flying animatronic character appears that is apparently born of the cross between a dragon and a Labrador retriever. Berlusconi, his political promoter His rise in politics was facilitated by the arrival of Berlusconi. In 2008, at the age of 31, she was appointed Minister of Youth Policy in the fourth cabinet of the Italian media tycoon, becoming the youngest minister in the history of the Italian Republic and the youngest also in Berlusconi’s conservative party. In 2012, after forming her own party, Brothers of Italy, she received only 4% of the vote in the last elections of 2018. But her luck has changed. From the ranks of her party, whose campaign slogan is “Ready” (“Prepared”), she assures that she has overcome the nostalgia of fascism. Meloni calls for a naval blockade against illegal immigration (she accused the European Union of being complicit in ethnic “replacement”), and she often warns her followers of a dark international banking conspiracy. She is a defender of NATO, of Ukraine and maintains her support for the European Union and the euro, although in the past she has characterized it as a “wrong currency”. Admirer of Donald Trump’s Republican Party, Hungarian Prime Minister Viktor Orbán and former candidate President of France, Marine Le Pen, Meloni and her party advocate for the natural family and speak out against marriage and adoption for the LGBTQ community. In the event of reaching the head of the Italian government, she says that she will not repeal the abortion law and will try to reduce pregnancy interruptions with aid to women without economic resources. Today, in the countdown to the holding of the national elections, with the only major party remaining outside Mario Draghi’s coalition government of national unity, the Roman leader has positioned herself at the top of the polls of opinion with around 25% support. Unless the polls are drastically wrong, on September 25 Italians will elect the most right-wing government in their country’s post-war history.

1 thought on “Giorgia Meloni, is it inspired by “The Lord of the Rings”?”