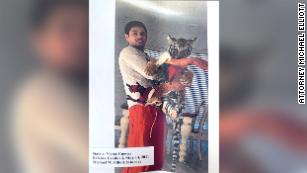 (CNN) – José Ramos looked up from his dining room and was met with a strange look outside his home in Houston this past Sunday. It was a tiger.

He grabbed his phone, snapped a few photos of the animal sitting in his front yard and posted them to a neighborhood group, where they quickly caught the attention of a deputy sheriff, who lived nearby and was on a day off.

The deputy sheriff showed up at the house and pointed a gun at the animal while he waited for the police to arrive. A woman passing by by car started recording the scene.

But, before authorities showed up, a man named Victor Hugo Cuevas came into the yard from a nearby house and pleaded with the deputy sheriff not to kill the tiger.

Cuevas grabbed the tiger by the neck, kissed him on the forehead and led him into the house, deputy sheriff Wes Manion testified in court.

“That’s my tiger,” Manion said of what he heard Cuevas say.

Moments later, Cuevas got into a white SUV with the animal and ignored Manion’s orders to stop, then leave.

That was the last time anyone saw the animal for nearly a week, before being located by authorities on Saturday.

The search for India – the 9-month-old male tiger – kept some Houstonians nervous and captured the country’s attention.

We present to you how the whole situation unfolded.

The search for the tiger and the Caves

Houston police announced a search for both Cuevas, 26, and the tiger on Monday.

Cuevas was out on bail on a murder charge in Fort Bend County, Houston Police Commander Ron Borza said during a news conference Monday.

Cuevas’ attorney presented photos of the tiger with Cuevas.

On the subject of the tiger, the Houston police announced that he was accused of a crime of evasion of arrest for fleeing from the agents with the animal.

Cuevas was previously charged with murder for allegedly shooting and killing a man in 2017. Court documents maintain that he has violated his bail multiple times since he was first arrested that year.

Separately, he was also released on bail on a different charge earlier this year in Austin County for evading arrest or detention in a vehicle, court records show.

Several hours after Borza’s press conference, the police announced that Cuevas was in custody. His bail was set at $ 50,000.

But there was still no sign of the tiger.

Cuevas posted bail two days after his arrest. His attorney, Michael Elliott, was out of jail Wednesday with Cuevas by his side and told police that his client did not own the tiger.

“(The police) saw my client come to the patio and retrieve the tiger, and they assumed he did a lot of different things that he did not necessarily do and of which he is not guilty, just as they assumed that the tiger is his,” he said . Of course it’s not his.

In a subsequent interview with CNN, Elliott revealed that Cuevas had “cared for” the tiger on occasion.

“They clearly have a bond and he loved this tiger,” noted the lawyer.

Owning a tiger is a violation of the law in Houston, but it is legal under Texas state law, albeit with certain restrictions.

Elliott stressed outside the jail on Wednesday that they were working to locate the animal, but would not say where Cuevas went when he left with the tiger on Sunday.

A spokesperson for BARC – a Houston animal shelter and adoption center – said at the time that animal control officers were assisting city police with the investigation.

“In the event such animals are found in Houston, animal control officers will confiscate them and transport them to a safe location, be it BARC, another refuge, or a regional wildlife facility, to protect the safety of people as well as animal health, “said Lara Cottingham, a city spokeswoman.

The reflectors come to the case

The search was not long in attracting everyone’s attention.

Carole baskin, founder and CEO of Big Cat Rescue, which appeared on the Netflix series ‘Tiger King’, announced that it was offering a reward of US $ 5,000 to the person who had to India, as long as they delivered the animal to a site accredited by the World Federation of Animal Sanctuaries, and will work with authorities to convict those involved in buying and selling the tiger, he said in a video on Instagram.

Police received hundreds of calls throughout the week with information from the public and said they believed the tiger could have been flown to as many as eight different locations around Houston.

But even so, India was still not located.

Cuevas was re-arrested Friday after a Fort Bend County judge revoked his bond on the pending murder charge and set a new bond of $ 300,000.

However, during what was supposed to be a brief bail revocation hearing, more details were revealed about the animal’s disappearance.

Attorney Michael Elliott and Victor Hugo Cuevas attend the bail revocation hearing for a murder charge at the Fort Bend County Justice Center on Friday, May 14, 2021, in Richmond, Texas.

Houston Police Officer Justin Nobody testified during the hearing that he arrived at the scene Sunday night, but that Cuevas fled before he could give him an order.

No one added that he started a chase but did not attempt to reach the vehicle after the deputy sheriff told him there was a tiger inside.

Georgie “Gia” Cuevas, Victor’s wife, stated that he occasionally cared for the animal, and that she was home Sunday night and told Cuevas to go away and take the animal to safety after the confrontation with the deputy sheriff.

He said he did not see the police chasing Cuevas and that he cooperated with authorities.

After the hearing, Cuevas’ lawyer revealed that the defendant took the tiger to its owner on Sunday and that he had already provided information about that person, but the police did not identify people related to the matter.

Cuevas first met the owner from India when he bought a dog from that person, Elliott said, and the owner later introduced him to the tiger after learning that Cuevas was interested in the animals.

“I think the owner is hiding under a rock right now because of the worldwide attention that is looking to him and India,” he added.

Finally, the Houston police announced at the last minute Saturday that the tiger “was found and appears to be unharmed.”

Borza reported in a press conference Saturday night that Cuevas and his wife Gia are the owners of the tiger.

“I let Gia come with us… due to the stress that the tiger has suffered in recent weeks. He was obviously agitated, ”Borza said.

He added that the tiger “seems to be in very good health” and that Gia Cuevas informed the authorities that they have had the animal for nine months. She is not facing any charges at this time, Borza said, but added that it is illegal to house a tiger within Houston city limits.

India after being handed over to the authorities

“In no way should such an animal be kept in the home,” said Borza. “This animal can weigh 270 kilos. It still has its claws, and it could do a lot of damage if it chose to.

Authorities say they do not know where the tiger was at this time or if it remained in Cuevas’ custody at all times.

“Right now it is still an ongoing investigation,” Borza said.

Elliott, the attorney, said Saturday night that the animal was turned over anonymously to a Houston tennis club after Cuevas’ wife received a phone call from the person who had the tiger.

Contradicting police accounts, he said that Cuevas “technically was not the owner” but that he was still a “fundamental part of the tiger’s life.”

A new house in a sanctuary

On Sunday, the tiger was moved to its new home in Cleveland Amory Black Beauty Ranch, an animal sanctuary about 200 miles north in Murchison, Texas.

The sanctuary, which is part of the Humane Society of the United States, is home to more than 800 animals, including other tigers found in Texas like Loki, who was discovered in a cage in an abandoned house in Houston in 2019.

India is seen before being transported to the Cleveland Amory Black Beauty Ranch, an animal shelter in Murchison, Texas.

“We are happy to bring India back home to Black Beauty, where it will be introduced to a habitat of half an acre of natural forest, with a pool, trees, platform and a proper nutritious diet,” said the sanctuary’s senior director, Noelle Almrud, to reporters Sunday morning as the tiger paced in his transport trailer a few feet away.

The trip was expected to take about three hours, Almrud said, with a few stops along the way to see how India was doing.

The tiger has not yet been fully examined, but Almrud noted that the animal appeared healthy. When India arrives at the sanctuary, she will be introduced to her own den to acclimate to the surroundings before being placed in her new habitat.

It is not known if India will have any interactions with other tigers; It will first be quarantined for the first 30 days to make sure it won’t transmit any disease to other animals, Almrud said. You will then have eye contact with other tigers, but everything else will depend on the personality of the animals.

“It is not always easy to introduce tigers together, especially when they are older,” Almrud stressed, “but we will follow the matter little by little and see if you are interested in meeting any of our other tigers.”

1 thought on “A tiger was lost in Houston for almost a week. This was his search and what awaits the feline”