Covid tests at school, a “fiasco” that has lasted for nine months – The HuffPost 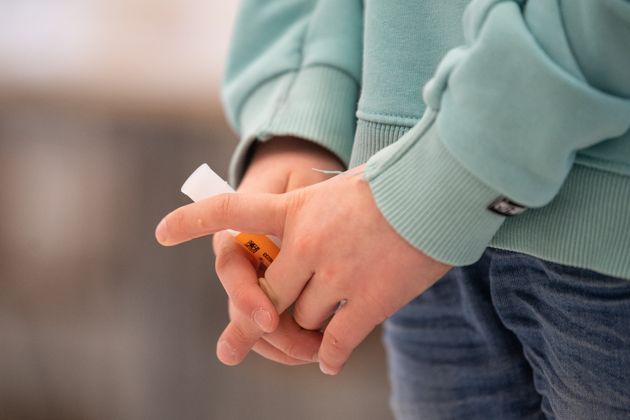 In France around 200,000 saliva tests, like the one shown in the photo, are carried out every week in schools.

COVID-19 – Has the Department of Education Thought Too Big? In order to better “trace, test, protect” schoolchildren, the Minister of National Education Jean-Michel Blanquer had announced during its back-to-school conference an objective of 600,000 saliva tests performed per week throughout the country in nursery and primary schools. A strategy described as “ambitious” by the ministry on its own site.

Too ambitious? Three months later, the objective is in any case far from being achieved. About 400,000 tests deployed each week (while 600,000 are well available), only half are actually made. However, these rapid tests remain essential with the arrival of the 5th wave, which does not spare children (the incidence rate among children under 9 has never been so high) and therefore schools: 8,000 classes were closed. this Thursday (against 6000 out of 527,000 Tuesday). They were 4000 just 4 days earlier, and 1000 in mid-November. As a reminder, all you need is a positive student Covid-19 in the classroom to close it.

How to explain the difficult implementation of these saliva tests, which some teachers go so far as to qualify as a “fiasco”, a term already used before the summer? Élisabeth Allain-Moreno, national secretary of the teaching union UNSA interviewed by the Huffpost, explains that “parents are reluctant to give their consent because it affects the health of their children”.

A lack of communication

Also contacted, the Ministry of Education did not wish to speak on the subject, but Jean-Michel Blanquer shared this observation in the Parisian : ”Even for these kind of painless and simple tests, there is not overwhelming acceptance. It’s a difficulty we’ve had from the start. ”

Élisabeth Allain-Moreno points out, however, the responsibility of the ministry whose speech was “vague”. “There was a certain cacophony that did not create confidence,” she explains. Initially the equipment did not arrive (these tests have been deployed since February, Editor’s note), is added the difficulty of managing the announcements of class closings made at the last moment, then the question of the mask at school which has only changed … Basically, the tests are a good idea. But on the form, there was a lack of communication and there is now a kind of fed up with the parents. ”

Guislaine David, spokesperson for the Snuipp-FSU union, confirms to the Huffpost: “There was no communication campaign for these tests, although they are the only way to protect children against the virus and prevent them from spreading it”, because children under 12 do not yet have access to vaccination. Result: last week, just under 50% of parents agreed to have their offspring tested, either at home (self-sampling saliva test) or directly at school – it all depends on the choice made by the laboratory or rectorate.

Another problem pointed out by trade unionists: the lack of resources. “Some laboratories do not have the necessary manpower, others have hired staff, but not necessarily trained,” regrets Élisabeth Allain-Moreno, who also points to the lack of anti-Covid mediators, sometimes non-contractors. health workers who had been deployed in the spring to assist school medical staff.

“They were extended until December 31, but we will still need them afterwards, because the 5th wave will still be there,” insists the Deputy Secretary General of the National Union of School and University Physicians (SNMSU) UNSA Jocelyne Grousset. This also evokes the gap between rural areas, often less well off than urban areas and where logistics become more complicated: the laboratories are fewer or more distant, the recruitment of mediators is sometimes more difficult.

Large responsibilities fall on the principals of schools, regrets Élisabeth Allain-Moreno: “They must manage the implementation of the protocol which often evolves, ensure the link with the families, with the town hall, and in addition in many cases they have to teach because they are also school teachers. ”

The arrival of the 5th wave and the multiplication of Covid-19 cases is not likely to lighten their workload, especially if as BFMTV thinks it knows, the rule in force in schools is changing: classes could no longer close in the first case of Covid. But that would actually require testing several hundred thousand children every week.

See also on The HuffPost: To help children get vaccinated, this hospital in the United States has surrounded itself with dogs

One thought on “Covid tests at school, a “fiasco” that has lasted for nine months – The HuffPost”