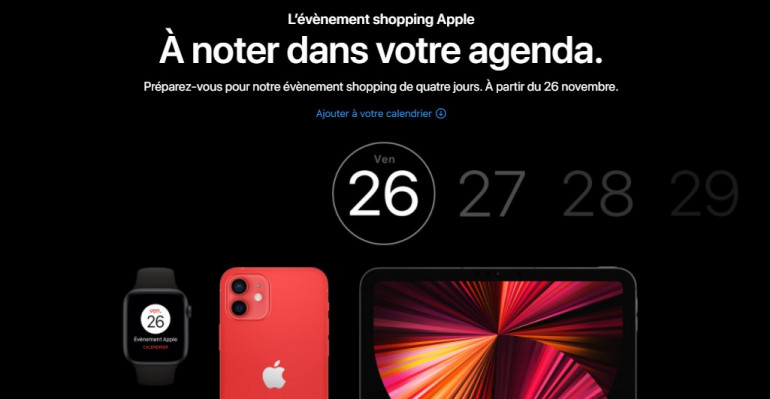 The brands did not wait for its official kickoff to draw their promotions. Black Friday is already a reality on the Internet where discounts are multiplying as the launch of this promotional highlight set for November 26 in France approaches.

Electronic products feature prominently every year during these promotional periods which offer consumers the opportunity to start Christmas shopping inexpensively, free from the hustle and bustle of the stores just before the holidays.

Labeled “Black Friday” or under another label, there are already many offers on the sites of major distributors. They will be completed in the coming days with more or less marked promotions.

Be careful, that said: not all discounts are necessarily good deals. Many brands adjust prices at the last moment to give the illusion of attractive promotions. Do not hesitate to use price comparators. Also be vigilant about the ever increasing number of scams and attempted scams at this time.

To guide you through this intense commercial sequence, we’ve taken a tour of the big high-tech brands to see which products are on offer at great prices these days.

Apple: watch out for fake promotions

After having long turned its back on Black Friday, Apple has been offering a light device for a few years. The American company announces this time on its site promotions from November 26. For four days, customers will be offered an App Store and iTunes gift card for the purchase of certain qualifying products.

Concretely, the purchase of an iPhone 12, iPhone 12 Mini or iPhone SE will be the opportunity to receive a voucher of 50 euros. Similar discounts are available for the purchase of certain models of Apple Watch, MacBook, and Apple TV. The most interesting offer probably concerns the purchase of the second and third generation AirPods and AirPods Pro which will give rise to the delivery of a benefit card of 75 euros.

For discounts directly applied to Apple products, you have to turn to distributors. Discounts aren’t great on iPhones where there are only promotions between 10 and 30 euros, depending on the model. Beware: some sites display fake prices to inflate their discounts. The site Rakuten thus proposes 128 GB iPhone 13 at 879 euros instead of 1,299 euros, or a promotion of 400 euros, while this smartphone is actually sold at a price of 909 euros by Apple, or a real promotion of 30 euros, thirteen times less than announced.

Consider comparing the offers with the rates offered by Apple and resellers the rest of the year. Be careful as well distinguish between new and reconditioned products, the latter already being subject to reduced prices the rest of the time.

As for other products, AirPods 2 are offered with a reduction of 30% at most distributors, or 120 euros instead of 150 euros. Good business is to be achieved with the MacBook Air M1 launched in 2020 at a price of 1,129 euros and now displayed at 999 euros at most resellers. The iPad Air and the iPad 8 are displayed with around sixty euros less.

The most interesting offers can be found among Apple’s competitors. Chinese brand Xiaomi offers offers of up to minus 200 euros on its range of smartphones which are already excellent value for money in normal times. Another market outsider, Oppo has been showing promotions for a few days now on his various smartphones. For example, we find the excellent Find X3 Pro 5G at 899 euros instead of 1,199 euros or the Find X3 Lite at 330 euros instead of 400 euros.

Apple’s biggest rival, Samsung announces promotions until November 28 on his site. Among the discounted products, we find the Galaxy A52 5G 100 euros cheaper at 379 euros and the Galaxy S20 FE at 399 euros against 649 euros when it was launched at the end of 2020. At Oneplus, the versatile OnePlus North goes from 399 to 299 euros. The OnePlus Nord CE and OnePlus Nord 2 also benefit from an immediate discount of 50 euros. The flagship killers of realme, the GT 5G and the GT Neo 2 benefit for their part of 100 euros of reduction at the moment.

Always keep in mind that some of these models get regular flash promotions throughout the year, so be sure to compare the deals to see if they’re really worth it on Black Friday.

In the video games department, do not count on discounts on generation consoles, the PlayStation 5 and the Xbox One Series S / X, whose stocks are still tight one year after their official launch. Promotional offers are more for games with 30 to 50% discounts on titles like FIFA 22, Far Cry 6, NBA2K22, Resident Evil Village or The Last of US part II. The period is also interesting to afford a PS Plus, PS Now or Xbox Live subscription to play online at a preferential price with discounts of around 30%.

At last, most audio brands obviously participate in the event. It is possible to find headphones, wireless headphones or a speaker at a preferential rate at Bose, Jabra, Ultimate Ears or Sony.

Omicron variant, in Israel stop to international arrivals for foreigners