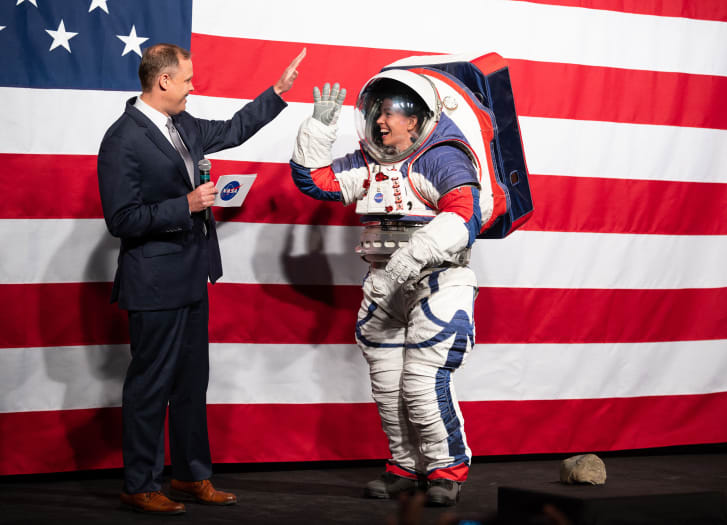 They will take a person of color to the moon for the first time 0:36

(CNN) – Humans have explored the infinite abyss beyond Earth’s atmosphere for more than half a century.

When astronauts explore the vast expanse of outer space, they need to wear high-tech spacesuits to protect themselves from the frigid conditions of the cosmos.

Hollywood movies have glamorized the suit, the design of which suggests that it is a suit that can be put on in a matter of minutes.

In reality, the suit itself is a fully functioning spacecraft, taking hours to put on and requiring the help of companions, said Cathleen Lewis, curator of international space programs and of spacesuits at the National Museum of the World. Air and Space from the Smithsonian Institution.

“The purpose of the spacesuit is essentially to exist as a human-shaped spacecraft that allows the person to autonomously explore and do meaningful work outside the comfort of the spacecraft or space station,” Lewis said.

This is how the Artemis space mission would develop on the Moon 0:38

From start to finish, it can take an astronaut up to four hours to get dressed, Lewis said. Before starting a spacewalk, astronauts should check every piece of equipment and make sure they have enough key supplies, such as oxygen and water.

During the entire process of the spacewalk, a team on Earth supports the astronauts. Flight controllers follow a procedural plan of about 30 pages, but there are other plans in case problems arise, said Sarah Korona, an EVA flight controller at NASA’s Johnson Space Center in Houston. “EVA” is short for “extravehicular activity.”

The anatomy of a spacesuit

A spacesuit is made up of nearly half a dozen different components and can have up to 16 layers, according to NASA.

Mission astronauts Artemis, NASA’s next program to send the first woman and the first person of color To the moon, they will wear the newest space suit, called the exploration extravehicular mobility unit, also known as the xEMU. Before the spacesuits hit the moon, parts of them will be tested on the International Space Station.

One of the main components is the cooling garment, said Richard Rhodes, deputy director of pressure garment development for xEMU at NASA. The garment is made up of tubes that circulate water around the astronaut, regulating the body’s temperature and eliminating excess heat as it completes its work.

Each spacesuit has a portable life support system, which includes a water reservoir for the cooling garment, a carbon dioxide removal system and other elements, according to NASA. This component also includes a two-way radio system for astronauts to communicate.

The original spacesuits used during the Apollo missions were less flexible than the current ones.

“When Apollo astronauts walked on the moon, they couldn’t bend over and pick up a stone,” said NASA astronaut Mike Fincke. “They had to carry a special little tool with a handle.”

Fortunately, spacesuits have come a long way since then and have a more flexible build with gloves.

Gloves are one of the trickiest parts of the spacesuit, and are often the biggest source of complaints from astronauts about their suits, Lewis said.

“Gloves are very difficult to design to protect and at the same time allow the manual dexterity that astronauts need to do meaningful work,” he said.

Pressurized gloves can be very tight, especially after hours of work in space, he said. In addition, the fingers get cold, so it is necessary to incorporate heating elements into the gloves.

This glove is part of a NASA extravehicular mobility unit, the technical term for a spacesuit. Credit: NASA

When astronauts train to go into space, one of the training exercises involves catching a dime in the spacesuit underwater, Lewis explained. These explorers require extreme dexterity to work in space, and gloves are an added challenge.

Much of an astronaut’s training in a spacesuit takes place in a swimming pool at NASA’s Neutral Buoyancy Laboratory in Houston. Water simulates the feeling of weightlessness, which is similar to what you feel in space.

This test brings NASA closer to returning to the Moon 0:58

On the outer side, each suit has unique colored stripes. This is how astronauts can tell who is wearing which suit when they are in space, Lewis said.

This system will be used in the spacesuits for Artemis, Rhodes confirmed.

Manufacture of spacesuits for Artemis

For the Artemis program, NASA needs its astronauts to be able to safely explore the lunar surface.

In the past four years, NASA has invested more than $ 300 million in developing the xEMU, Rhodes said. His team has tested dozens of components and evaluated the pros and cons of each option.

The biggest challenge for Artemis suits is making sure they’re optimized for lunar exploration, he explained.

The suits have to be “light enough to withstand the lunar mission and robust enough to protect the astronaut while working in a very dangerous lunar environment,” said Rhodes.

The spacesuits for Artemis are made from thousands of pieces from all over the United States, according to Rhodes. Some parts can take up to a year to build, but NASA is working to reduce this time, he added.

The spacesuits will also receive some upgrades for the lunar mission. Current and past extravehicular mobility units, the technical term for NASA spacesuits, allow minimal movement of the waist, hips or ankles, Rhodes said.

Astronauts on the Artemis mission need more mobility to be able to explore the rugged terrain of the Moon, he said, so his team is working on a suit that allows more movement while still being strong enough to protect the wearer.