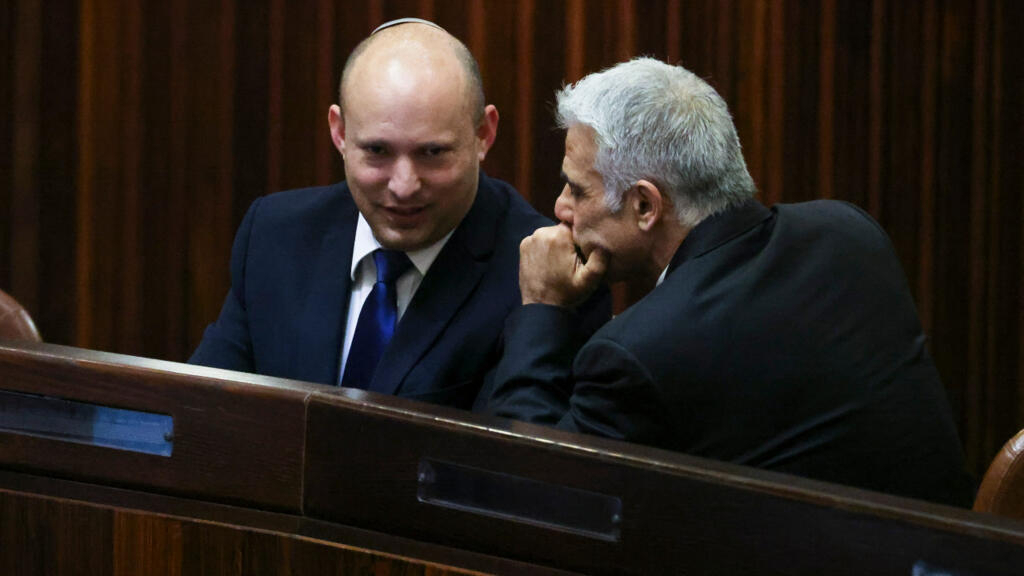 The Israeli parliament will organize the vote of confidence in the new government on Sunday (June 13), the last step before the installation in power of the coalition which is to succeed Benjamin Netanyahu’s government, its president announced on Tuesday.

The political calendar accelerates Tuesday in Israel for the new Israeli government, on the verge of ending the 12-year term of Prime Minister Benjamin Netanyahu, with a vote of confidence from Parliament and a nomination set for Sunday.

The President of the Parliament and master of the clocks in this soap opera with multiple twists, Yariv Levin, announced Tuesday June 8 that the eagerly awaited vote of confidence in the new government coalition would be held “Sunday June 13, 2021 during a special session of the Parliament “.

This formal consultation is the last step before the installation in power of the heterogeneous coalition formed in extremis, on June 2, by the leader of the opposition Yaïr Lapid with two left parties, two from the center, three from the right including Yamina ( radical nationalist) and the Israeli Arab formation Raam (Islamist).

“The unity government is on its way for the good of the citizens of the State of Israel,” the centrist Yair Lapid responded in a tweet.

The main orientations, the conditions of entry or exit of the coalition as well as the breakdown in the details of the portfolios, are still being studied. A formal document must be tabled in Parliament before the vote.

This final agreement will notably ratify the principle of rotation at the head of government. The leader of the Yamina party, Naftali Bennett, will take the lead until 2023 before ceding the position of Prime Minister to Yaïr Lapid until 2025.

The new coalition, supposed to end more than two years of political crisis marked by four legislative elections, was formed to oust Benjamin Netanyahu, the most enduring prime minister in the country’s history with a total of 15 years in power (1996 -1999 and from 2009 until now).

But on paper, everything opposes the members of the “coalition of change” divided on economic questions, colonization, or on the sensitive issue of the relationship between state and religion.

One of the flagship projects of this government announced as fragile, concerns the passage of a law that would definitively rule out a new candidacy of Benjamin Netanyahu, tried for fraud and corruption in several cases.

“It is not ad hominem, but we consider that an indicted person cannot serve as prime minister or receive the mandate of the president,” said Karin Elharar, member of the Yesh Atid party.

More than ever close to the exit, Benjamin Netanyahu, 71, has multiplied the warnings and the formulas of denigration against the new team, to the point of worrying the local security services.

Last battle of the outgoing Prime Minister: the support for the organization of a very controversial “march of the flags” initially planned Thursday in East Jerusalem, Palestinian sector occupied by Israel, at the call of figures of the extreme right.

The high-risk route of the parade, seen as a provocation by the Palestinians, was not approved by the police, prompting the organizers to give up at first.

According to the Israeli press, Benjamin Netanyahu has been in action since Sunday, supported by several members of his party who have already announced that they would march anyway, to maintain the demonstration, despite the reprobation of the Minister of Defense and the heads of the services of security.

The Palestinian Islamist movement Hamas threatened to escalate further if the march was maintained.

“We hope that Thursday does not become” a new May 10, said Hamas tenor Khalil al-Hayya, in reference to the start of the escalation between Hamas and Israel that led to a war of 11. days.