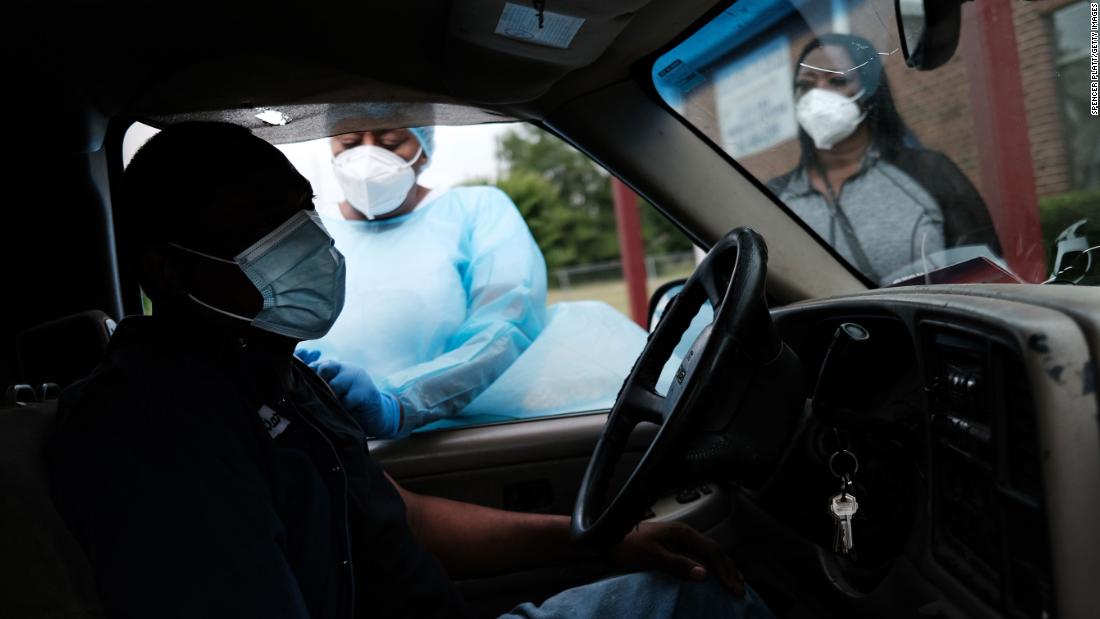 Cruises return from Florida and Texas 1:05

(CNN) – Even as signs of normalcy are returning across the United States, from in-person graduations to maskless Memorial Day celebrations, experts warn that the country must redouble its efforts to vaccinate more people by July 4.

The United States reached its peak in daily vaccinations on April 1, with more than 4.3 million people getting vaccinated in one day, according to data from the U.S. Centers for Disease Control and Prevention.CDC). Since then, the numbers have dropped to an average of 560,000 daily in the last week.

President Joe Biden has called for 70% of all adults to have at least one vaccination by July 4. But a recent analysis of CNN from the CDC data found that the United States probably won’t hit the target until mid-to-late July.

Dr. Ashish Jha, dean of the School of Public Health at Brown University, agrees that the country is not on track to reach the milestone. “So we have to redouble our efforts,” he told CNN’s Jake Tapper. States really have to pick up the pace. If we remain in the status quo, I don’t think we’ll get to that 70% by July 4th. “

State leaders have offered incentives ranging from free beer to lottery tickets to encourage more people to get vaccinated.

CDC data shows that 63.7% of Americans have received their first dose of vaccine, but misunderstandings about the dangers of transmission and the need for vaccines could put more people at risk, Jha said.

“I understand that in the short term we can continue as we are, having slow vaccination rates,” he explained. “But these people are really vulnerable, once we have more variants circulating in the United States, to re-infection and potentially seriously ill.”

The data of the CDC show that about one in three Americans became infected with COVID-19 during the course of the pandemic.

But while people who have been infected may think they now have natural immunity, they may not be aware of the danger posed by the variants, Jha said.

Misunderstandings around vaccines lead to hesitation

Cruises return from Florida and Texas 1:05

In Mississippi, the state with the lowest vaccination rate in the country, the governor has attributed residents’ hesitancy to the idea of ​​natural immunity.

CDC data shows that less than 45% of adults in the state have received at least one dose of the vaccine and only 35.7% are fully vaccinated.

“We have 1 million Mississippi people who have natural immunity and that is why there is very, very, little virus in our state,” Governor Reeves told CNN on Sunday.

Reeves and his wife have been vaccinated and said he believes the vaccine is safe and effective. However, the governor called Biden’s goal “arbitrary” and said the 320,000 Mississippi residents who tested positive for the virus may have natural immunity.

The governor said the number of cases and hospitalizations have dropped significantly in his state, so while he encourages people to get vaccinated, he feels that people have the right to make their own decisions.

“This is a misunderstanding that unfortunately many people have,” Jha said. “There is the idea that if you have been infected, you have natural immunity and you don’t need to be vaccinated. “I have no doubt that a vaccine-induced immunity is much more durable and will hold up much better against the variants,” he added.

The CDC released data Monday showing that even rare disruptive infections – people who test positive for COVID-19 despite being vaccinated – create a milder response to the disease.

People who got “disruptive” infections after one or two doses of the vaccine had 40% less virus in their bodies and were 58% less likely to have a fever. They also spent two fewer days in bed with COVID-19 than unvaccinated patients, according to the study.

“The only way to be protected is to get fully vaccinated,” Jha said, adding that people should get both doses. “That’s why everyone needs a second dose.”

As officials push to increase vaccination rates, a debate is brewing over proof of vaccination, with some state leaders saying they will not enforce it and others outright banning it, as many Americans begin to travel for the first time since the pandemic.

New York was the first state to issue a digital vaccine passport using IBM’s Excelsior Pass app that displays a custom QR code that verifies vaccination status. The application was tested in sports games in March.

On Monday, Texas Governor Greg Abbott signed a bill that prohibits companies from requiring customers to provide proof that they have been vaccinated.

“Texas is 100% open,” Abbott said when he signed Senate Bill 968. “We want to make sure they have the freedom to go where they want without limits.”

Abbott said that “no company or government entity can require a person to provide a vaccine passport, or any other information about the vaccine as a condition of receiving any service or entering any place.”

Abbott’s signing came the same day Carnival Cruise Line confirmed it will resume operations at the Texas port of Galveston on July 3.

Carnival currently requires proof of vaccination as part of its protocol for passengers.

“We are evaluating recently enacted legislation in Texas regarding vaccination information,” the company said. “The law provides exceptions for when a company is implementing covid protocols in accordance with federal law that is consistent with our plans to comply with the US Centers for Disease Control and Prevention (CDC) guidelines. ».

Moderna Says 5-Year-Olds Could Get Vaccine By Fall

Meanwhile, drug companies are advancing their research to expand access to vaccines at younger ages.

On Monday, Moderna CEO Stéphane Bancel said his vaccine will likely be available to children as young as 5 in early fall.

“I think it will be early fall, just because we have to age very slowly and carefully,” Bancel said at an event organized on the Clubhouse social media platform.

Pfizer-BioNTech’s vaccine has already been approved for 12-year-olds, and Moderna said it is testing its vaccine in children as young as six months.

Bancel noted that the process will take time as it determines the appropriate doses for young children. “We anticipate the data available in the September / October time frame,” he said.

His comments came when an investigation in the magazine JAMA Network Open showed that children with underlying health conditions are more likely to be hospitalized or become seriously ill from COVID-19.

Patients with type 1 diabetes and obesity were the most likely to be hospitalized, while those born prematurely were more likely to experience serious illness from COVID-19, the data showed.

The report suggested that this information be considered as vaccination priorities and that regulations be created.

1 thought on “The United States may continue with slow vaccination rates for now, says one expert. But it leaves us vulnerable for later in the face of covid-19”