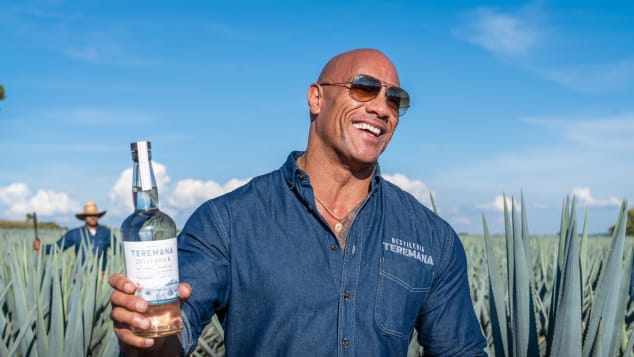 ‘The Rock’ talks about tequila and his love for Mexico 1:17

(CNN) – Hollywood’s highest paid actor for the second year in a row, Dwayne Johnson recently added “entrepreneur” to his resume. His fans know him as “The Rock” (“The Rock”), an action superstar and former professional wrestler, but recently he teamed up with a spirit drink from Mexico.
Teremana Tequila, launched in 2020, is one of the latest entries in the saturated celebrity spirits sector.

As a wrestler, Johnson adopted the character of the “People’s Champion,” and in real life he has struggled to do the same. So when he created the beverage brand before the pandemic, Johnson spent time in Mexico with the men and women who work hard to make the beverage, from the agave fields to the barrels.

Johnson’s love for Mexico and his native liquor intensified after a trip in 2007 to promote his film “The Game Plan,” at a time when he was still seeking his place among global audiences.

Wrestling will travel through Mexico to reactivate tourism 0:58

«I was able to drive to the perimeter of Mexico City [y explorar]. At the time, I was still on the rise, I was trying to turn my career around, “he said. “I’ve always liked culture and tequila, so it was an unforgettable trip.”

Johnson, a third-generation professional wrestler, was intrigued as a child by wrestling, a high-flying, theatrical version of the sport, popularized in the arenas of Mexico.

CNN Travel caught up with Johnson from Hawaii on the set of “Black adam«, The latest DC Comics superhero blockbuster, to talk about his collaboration with the López family to create tequila in Jesús María, Mexico, his interest in agave liqueur and how his family overcame their own fight against covid- 19. His next film, “Jungle Cruise”, will be released on July 30.

The following conversation has been edited for length and clarity.

How was your love for tequila born?

When I was young, my house always had tequila, whiskey, vodka and beer. I grew up with a true love for tequila and whiskey, in particular. But the first time I visited Mexico, specifically Mexico City, I went to some places and enjoyed a local tequila.

Until then, he had enjoyed the well-known and famous brands. But when I finally landed in Mexico in 2007, I enjoyed the local tequila. I loved. It was a really special connection. I remember buying everything I could from these local places.

I started asking questions about how that particular tequila was made. And the process. And then I went back to the same bar the next night. It was a good moment. Lots of fond memories of connecting with tequila and connecting with the locals.

Tell us about the distillery and the creation of the Teremana brand.

The distillery Teremana, in Jesus Maria [en el estado de Jalisco]It is a special place that I carry in my heart. When I first went there, we partnered with a beautiful Mexican family that is a tequila maker and agave grower.

We build our own distillery there. It is special because of the jobs we can create. We have almost 250 employees in Teremana.

Did you have any contact with the wrestling culture in your childhood?

I grew up in the world of professional wrestling. And in Texas, where we lived in South Texas, I was exposed to wrestling at the time. My father and grandfather were close friends with many of the best-known Mexican families, from the Warriors to Dos Caras.

I was always fascinated and in awe of wrestlers because they all wore masks and they were so… cool to me when I was little. I loved professional wrestling, and wrestlers were my heroes. And especially when I moved to South Texas, I saw them every night!

Did they inspire you in your professional career?

His style in the ring and his fighting style were very unique and very athletic, very different from the style of the United States. It always fascinated me, I loved watching the matches… in the front row. I was that kid who ate popcorn and dropped it on the floor. And he would go into the dressing rooms and hang out with my father… he kept his mouth shut because that was important. But I was in awe of all my heroes.

I was fascinated when I realized that wrestlers never took off their masks. Shower: The mask on. I mean, that’s commitment. And I remember asking my father and my family about that. And my father said, ‘They are protecting the business. It’s what we do and it’s what they do. ‘ In that culture that is the important thing for them, that they never reveal their identity. So that took my idea of ​​my heroes to a whole new level.

Last year you had covid-19. How did it affect you and your family?

It affects everyone differently. My symptoms were very mild. My wife had some stronger symptoms.

He was in bed for a day. He had a bit of a fever, but he got on with it. So we stayed like a car in neutral, kind of like on autopilot until it was over. Everyone around us had covid-19 and that thing is so fast and so treacherous.

Is there a place that is your “happy place”?

Is on the islands [hawaianas]. That’s where I always need to go. I focus, especially when I have my family with me and I can take our babies with us and make that “manna” seep into their souls. People are just warm. We were [en Oahu] right after Christmas.

I love taking all the production I can there. And I have reached a good point in my career where I can recommend without hesitation that we go to Hawaii. [risas]. It’s also good for the team, it’s great for the island… for the local economy.

What is your favorite cocktail?

Right now it’s ‘The People’s Margarita’. It is a variant of a high-end margarita, to which I add a little pineapple. I am a fan of pineapple of course as I have spent a lot of time on the islands [hawaianas]. That hint of pineapple adds a unique touch to the drink.

– Brad Japhe is a freelance travel writer specializing in all things food and drink. Follow him on Instagram @Journeys_with_Japhe.

1 thought on “Dwayne ‘the Rock’ Johnson talks about tequila, wrestling and his love for Mexico”