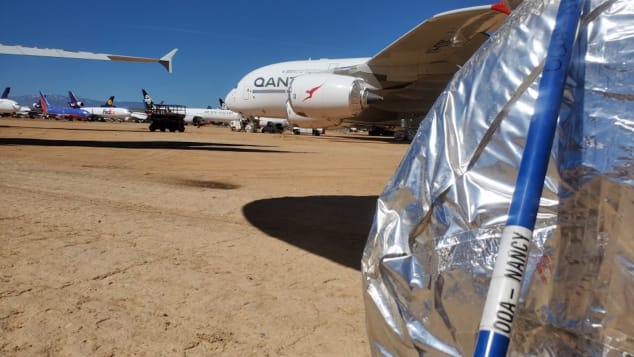 They forecast record losses for airlines 1:11

(CNN) – Since the beginning of the pandemic, thousands of airplanes from airlines around the world have been immobilized, and many of them were temporarily transferred to hot and arid deserts, ideal conditions for the storage of aircraft.

But, as aircraft maintenance workers have discovered, these climates often bring with them unwanted, and sometimes deadly, inhabitants.

Australian airline Qantas revealed that engineers tasked with keeping its fleet of A380 superjumbos stored in California’s Mojave Desert have had to devise a simple but effective system to protect themselves from poisonous rattlesnakes in the region.

“The area is well known for its fierce rattlesnakes, which love to wrap themselves around warm rubber tires and on the plane’s wheels and brakes,” explains Qantas Los Angeles Director of Engineering Tim Heywood , in a statement published in the airline website.

“Each aircraft has its own ‘wheel cleaner’ (a repurposed broomstick) as part of the engineering kit, with each aircraft’s registration number written on it.”

The ‘wheel cleaner’ is a broomstick used by Qantas engineers to scare away snakes that nest on aircraft wheels (Credit: Qantas)

Before inspecting the landing gear, workers first walk around the plane by stomping and hitting the wheels with the broom to scare away any sleeping snakes, Heywood said.

“We have come across a few rattlesnakes and also a few scorpions, but the ‘wheel cleaner’ does its job and they sneak away,” he noted.

“It is a unique moment in taking care of these aircraft while they are in storage and it is another sign of how strange the past year has been. These A380s rarely spent more than one day on the ground when in service. “

Qantas has parked a dozen of its A380s at an airfield in Victorville, about two hours from Los Angeles. One of them took off this week for the first time after being idle for 290 days, flying from Victorville to Los Angeles to undergo an undercarriage check procedure at the Qantas hangar in this city.

US will ask air travelers for negative covid-19 tests 0:43

“Airplanes of this type are very high-tech and you can’t just land in storage facilities, park them and drive off,” Heywood said. “It is really important that even when stored for a long time, the aircraft are maintained to the Qantas standard.”

At the height of the pandemic, airlines pinned more than two-thirds of their commercial jets and shipped them to storage facilities around the world.

Once parked, airplanes go through a process that involves draining fluids, covering engine intakes and exhausts, and protecting external instruments, such as pitot tubes (used to control the aircraft’s speed during flight).

And now, many airlines are having to reverse the process.

Although experts say it will be at least two years before traffic returns to pre-pandemic levels, international air travel is slowly recovering as countries reopen their borders to travelers from around the world.

And bringing aircraft out of hibernation is not as simple as starting the engine and taking off. In 2020, CNN Travel spoke with various experts about the process of flying again.

According to B1 licensed aeronautical engineer Steph Smith, when planes have been on the ground for some time, getting them ready to fly again means starting with simple things, like removing the massive amount of shields on the engines and the tapes that cover each hole. , inlet or probe.

“There is nothing worse than having systems full of insects, water or debris because, as air crash investigations have shown over the years, blocked pitot systems can give catastrophic results,” Smith told CNN.

Smith estimates that it takes more than 100 man-hours to make a wide-body aircraft flyable after storage, and about 40 man-hours for a narrow-body aircraft. The time required depends on both the size of the aircraft and how long it has been in storage.

It takes more than 100 hours of work to make a wide-body aircraft flyable after storage. The ‘wheel cleaner’ is just one element of the process (Credit: Qantas)

“If it’s only in short-term storage, it can get up and running pretty quickly because it has been serviced every two weeks to keep it in flight condition,” explains Smith.

“While airplanes in long-term storage can take a long time, and if we’re talking about something like an A380, it’s going to be a lot of work because it’s a big plane.”

Other tasks are to change the motor fluids if they were inhibited and to reconnect the batteries.

1 thought on “Qantas faces another challenge from the pandemic: chasing away the snakes that nest in its immobilized planes”