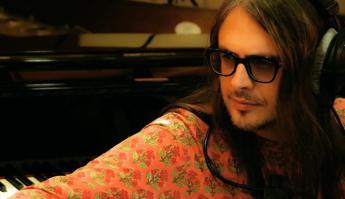 Maestro Louis Siciliano will be the author of the soundtrack of the new film by Dario Argento entitled ‘Black Glasses’. The name of the Neapolitan musician is thus added to the list of composers (Goblin, Ennio Morricone and Brian Eno) who, over the years, have collaborated with the legendary director. Initially, the production of the soundtrack for this feature film was to be entrusted to Daft Punk. When, in February, the news of the dissolution of the famous duo arrived, Dario Argento, after meeting Louis Siciliano, had no doubts about the new choice. “The music in Dario Argento’s films has a very important function, I dare say first slowly and having the confidence and esteem of a sublime maestro like him is really the crowning of a dream as far as I’m concerned. I work 16 hours a day in pre-production to create some powerful and original sounds for this project. shooting, I will also begin to record in parallel, in order to proceed hand in hand with the editing “, said Louis Siciliano to the Adnkronos, totally involved in the creative process of what already promises to be next season’s film event. Louis Siciliano, award-winning composer of film music, has been repeatedly defined by critics as a “spirit of the Renaissance”. Argonaut of expressive and original sounds, innovator of the compositional meta-language Mumex (Multiverse Music Exploration), pioneer of electronic music and spatialization of sound, multi-instrumentalist and conductor, Louis Siciliano is known all over the world for his activity as tireless popularizer of frontier music. The composer lives and works in Los Angeles, London and Rome and is also the founder of Magic & Unique Group, a sort of Resistance, the last bastion of many musicians from all over the world who have polarized around this ‘artistic movement’ and who fight strenuously against the cultural flattening imposed by the mainstream. Dario Argento therefore wanted to choose an innovative and counter-current artist to give voice to this mysterious and intriguing new film.