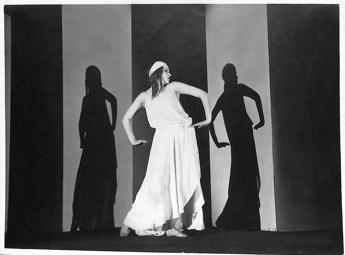 Study day in the spaces of the Villa Torlonia Theater in Rome, on 12 December, dedicated to Jia Ruskaja, the artist of Russian origin and founder of the National Dance Academy, whose 120th anniversary will be celebrated next year. A comparison between exponents of the world of dance, scholars, intellectuals, past pupils who will allow you to get closer, even with unpublished paths and testimonies, to the knowledge of Ruskaja, aka Evgenija Fedorovna Borisenko, undisputed protagonist of the cultural and artistic life of our country among the 30s and 70s of the last century. Expected on the stage of the Theater of Villa Torlonia, in a talk conducted by the journalist and dance critic, Rossella Battisti, Lia Calizza, Francobaldo Chiocci, Caterina Comentucci, Maria Gloria Spedaletti and Chiara Zoppolato. Following the national premiere of ‘Secret d’or’, the choreographic piece by Michele Pogliani, ‘pupil’ of Lucinda Childs, which mixes “method, innovation and authenticity”. In the afternoon a round table is scheduled, moderated by Gianluca Bocchino, PhD and scholar of Ruskaja, which features two of the greatest exponents of Italian dance in the university field, Alessandro Pontremoli of the University of Turin and Stefano Tomassini of the University. Iuav of Venice alongside Elena Casagrande, Mario Gatti and Bianca Romaldi who, at the National Gallery of Modern and Contemporary Art (Gnam), organized and curated the exhibition together with Claudia Palma on ‘Anton Giulio Bragaglia. The archive of a visionary dedicated to the theater and film director, scholar and writer who first gave the stage name of Jia Ruskaja to an almost unknown Evgenija Borissenko. At the end of the study day on stage ‘Homage to Jia Ruskaja’, the last stage of the workshop carried out with young dancers and choreographers led by Daniela Capacci, as part of the Orchestica Variation project financed and supported by the Ministry of Culture -Fus, born from a idea of ​​Chiara Zoppolato, who signs the artistic part, and Daniele Cipriani who takes care of the general direction.