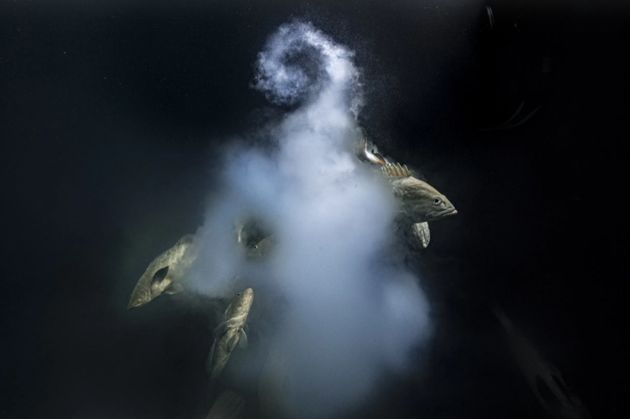 Laurent Ballesta is the first French to win the most prestigious prize in the animal photography competition.

PHOTOGRAPHY – A consecration. This Monday, October 12 was awarded the prestigious Wildlife Photographer of the Year, annual competition photography animal. Organized jointly by the Natural History Museum of London and the BBC Wildlife, more than 50,000 professional and amateur candidates from 95 countries participated.

A great first in the history of the competition launched in 1964, it was a Frenchman, Laurent Ballesta, who received the grand jury prize for this 2021 edition. His photo, taken in the lagoon of Fakarava in French Polynesia and visible at the head of the article, shows a female grouper surrounded by males partly camouflaged by a cloud of fertilized eggs, thus giving rise to a scene of rare beauty.

“The image is surprising, energetic, intriguing, and has a beauty from another world. It also captures a magical moment – a truly explosive creation of life – leaving the end of the egg-exodus suspended for a moment like a symbolic question mark, ”said Rosamund Kidman Cox, president of the jury, enthusiastically.

This spectacle offered by this carnivorous fish during fertilization is all the more astonishing as it is only visible once a year, in July during the full moon, tells the Natural History Museum of London on its site . And to explain: “This season of love is fleeting, lasts only an hour under the full moon and with a ebbing tide”.

Laurent Bastella and his team have been diving in the waters of Fakarava for five years so as not to miss this magical spectacle. “We dived more than 3000 hours to capture this special moment”, the photographer told the BBC. “The real secret of this photo is perseverance, it is to continue, every year, to try to be there at the right time”, he added for Paris Match.

With this shot, he hopes to raise awareness of the need to preserve areas rich in biodiversity. “I don’t believe you can protect things you don’t know. We have to make these places known, ”he told the magazine. And to conclude: “This very special place that is the southern pass of Fakarava is protected, monitored and classified as a ‘Program on Man and the Biosphere’ zone by Unesco. It is no coincidence that there is an extraordinary phenomenon there ”.

In addition, the Frenchman was not satisfied with winning the most prestigious prize of this 2021 edition, since he also managed to rank five of his photographs among the 100 most beautiful nature photos of the year.

In all, 19 photos were distinguished during the competition according to the categories. The HuffPost invites you to discover some in the slideshow below.

See also on The HuffPost: This painter’s paintings are as realistic as photos