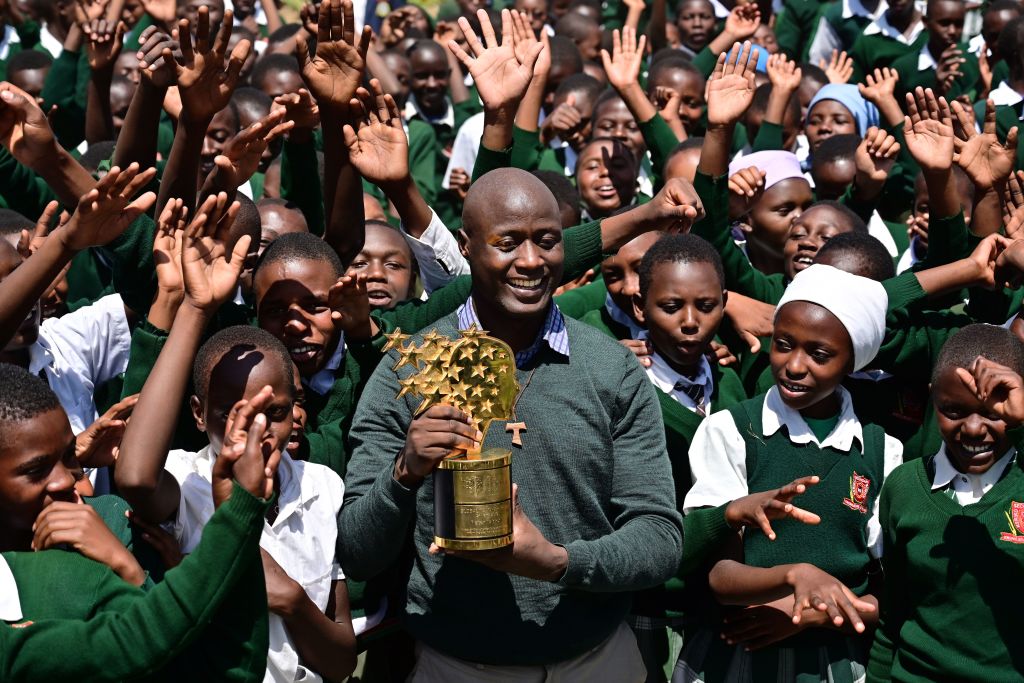 Last year, the winner was Ranjitsinh Disale, a teacher at Zilla Parishad Primary School in the village of Paritewadi, India, while in 2019 the award went to Peter Tabichi of Kenya.

Learn about the stories of these extraordinary teachers:

This teacher at the Peruvian Spanish Institute of Chiclayo, in northwestern Peru, has a history of personal and professional improvement. From a very young age, she suffers from chronic rheumatic arthritis and motor disability, which was not an impediment to developing her vocation.

As described on the official website of the Global Teacher Award, Leyva is a teacher in a privately run institute attended by many students from an unfavorable background.

To teach, he has applied technology and play techniques to motivate his students’ learning. With one of his projects, called Together, he achieved worldwide recognition. The success of his teaching technique is reflected in the fact that his students occupy more than 50% of the places at the Pedro Ruiz Gallo National University, the only university in the region.

If she wins the award, Aleyda will use the funds to create three new free School Innovation Centers focused on developing STEM (Science, Technology, Engineering and Mathematics) skills.

This teacher at Primary School No. 7 “Fragata La Libertad” in the Hipódromo de La Plata neighborhood, capital of the province of Buenos Aires, stands out for adapting digital tools to teach children with different abilities. In addition, he teaches workshops and courses on astronomy and environmental education.

Thanks to your initiative, their students have participated in radio and television programs to count about their school projects.

This music teacher from Colegio Santa Lucía, in the Chilean capital, has dedicated himself to teaching students who present different challenges, from motor difficulties to Down syndrome.

In 2015, he assumed the direction of the Orquesta Sonidos de la Luz, a group made up of blind and visually impaired students from that educational institution, with which he achieved a true achievement of self-improvement.

His students have performed in prestigious venues in Chile, including the Museum of Memory, the Bicentennial Moneda Building, and the Santiago Library. The orchestra recorded their first album in 2019, called “Música para tus ojos”. It is about the phonographic work of Chilean jazz performed by blind or visually impaired musicians.

He was the winner of the Chile 2020 Global Teacher Award, in a competition in which some 10,000 teachers participated.

This technology teacher at the Center for Industrial Technology and Services Baccalaureate No. 118. of the municipality of Corregidora, in Querétaro, is one of the main teachers in the country, with several recognitions in her career, such as the 2020 National Teacher Award.

It is PhD in Biomedical Sciences by the INB of the UNAM and Master of Science and “with her research experience she uses the inquiry methodology, added to active learning techniques based on problem solving with a STEM approach”, as detailed in her description of the award’s official site.

Beyond her teaching work, she is the co-founder of Scienko México and MujereSTEAMDGETI; organizer of the Mexico Zambia Science Exposition; National Coordinator of the Innovating Your Dreams program for Mexico and manager of collaborative work with teachers from other countries such as Peru, Egypt and Sweden, among other things.

This professor of mathematics and technology at the Guaimaral Technical Institute of Cúcuta left his career as a mechanical engineer to be a teacher of basic education. His first experience in education was in the city of Bolívar, Venezuela, in 2007.

In his teaching career, his focus was on innovation, which led him to create educational tools, such as magazines, mobile applications and software, which were distributed for free in 62 schools in his city.

He has obtained several awards in recent years such as “Best Ibero-American Teacher” in 2018 for academic excellence awarded by the Fidal Foundation; “Microsoft Innovative Educator Expert” in 2019; “My teacher My hero” from the Terpel Foundation, 2019; and the “Emir Jaber al Ahmad al Jaber al Sabah” prize in 2020, awarded by Unesco, for the development of technological resources for people with visual and hearing disabilities.

He is a teacher at the Provincial Institute of Technical Education (IPET) No. 85 “Republic of Italy”, in the small town Estación General Paz, in the province of Córdoba.

He has promoted several projects with his students, most of them related to community nutrition. For example, “they created protein-rich sweets made from nopal (also known as nopal) and candies fortified with vitamins C and E, which adolescents often lacked in their diets,” according to described in your finalist profile.

In 2018 she obtained the Illustrious Teacher award from the Ministry of Education of Argentina.

He is a mathematics teacher at the IF-Goiano public school in Ipameri, in the state of Goiás. Through the creative combination of scientific and technological disciplines, he has managed to create mathematics courses adapted to the demands of 21st century students.

In 2014 he gave shape to his Mattics project in a municipal public school, which encourages students to develop applications that benefit society. His work was recognized in 2017 by MIT in the United States.

This computer teacher from the Mercedes González Elementary School in Quito began teaching at the age of 12 as a volunteer for the Salesians, and his vocation for education did not stop.

He has promoted various technological projects in his career with his friends, which led him to be named Microsoft Innovative Educator in 2020. In addition, his students also won the MY FIRST CODE 2020 contest, as well as the INFOMATRIX-Ecuador 2018 Contest (category Innovation) and the IX Latin American Contest 2017, as described in your profile.

This teacher from the Serafín José García school in the small Uruguayan town of Vergara had her greatest challenge with the covid-19 pandemic, which forced her to find new ways to maintain ties with her students. Thus he created an online radio platform through which he gave lessons. He called it Radio Alegría.

What Marcia Hernández developed was truly innovative, since it allowed her students not only to maintain the bond, but to learn about new technological tools. Quickly, Radio Alegría was used by all the teachers of the school.

In 2020 he won the award ReachingU Foundation Teacher of the Year.

She is the first and only teacher in the Dominican Republic who specializes in education within the hospital environment through the project Zancadas de Pedagogía Hospitalaria.

As described in the official site of the Global Teacher AwardThis initiative “promotes the education of hospitalized children so that they are not delayed in their learning or personal development, while trying to satisfy the affective and social needs generated as a result of hospitalization and the illness they suffer.”

Thanks to her work, Calderón received the “Princesses of the 21st Century” award for Exceptional Women and Entrepreneurs of Latin America and the Caribbean in 2017.

1 thought on “Who is the best teacher in the world? 10 Latin Americans compete for the honor”