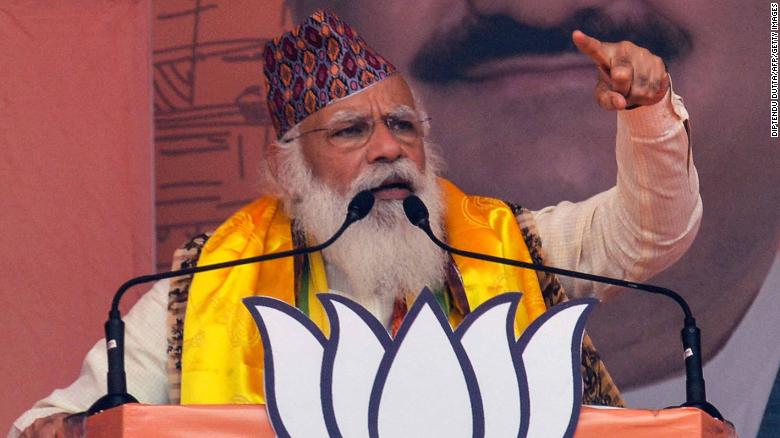 New Delhi (CNN) – Millions of Indians live under a combination of restrictions imposed by the coronavirus at the local level, while the central government resists calls by leading medical experts for a national shutdown.

The Indian Medical Association said earlier this month that a “comprehensive, well-planned and anticipated national shutdown” for 10-15 days would give the country’s overburdened health system time to “recover and replenish both like the manpower »you need.

On May 9, Dr. Anthony Fauci, America’s top adviser on coronavirus, declared on India: “We must shut down … we must break the chain of transmission.”

However, the government of Prime Minister Narendra Modi has done this before, and learned a very painful lesson. Experts say that closing the country again is unrealistic.

Indian Prime Minister Narendra Modi at a rally during the pandemic in West Bengal on April 10.

That shutdown, which ultimately lasted nearly four months, helped India control the spread of the coronavirus, but came at a high cost, as it left the country’s poorest and most vulnerable without income or food, and often abandoned far from their homes. .

This time, Modi says a national shutdown would be the “last option.”

“We have to save the country from closure,” Modi said in a speech to the nation on April 20. “We have to make an effort to avoid closures.”

Since then, the leaders of 35 of India’s 36 states and union territories have imposed their own restrictions, including night curfews, partial closures and week-long lockdowns. These kinds of short-term and localized measures are drastically different from the approach taken the last time India faced a wave of coronavirus.

Some experts say this makes perfect sense, as it gives regional leaders the freedom to tailor restrictions to the size of the local outbreak and the needs of their residents.

A single blockade for a country of 1.3 billion people does not work, they say.

India’s poor are the worst affected

India has recorded more than 24 million cases since the start of the pandemic, second only to the United States. More than 270,000 people have died.

According to a projection model of the Indian Institute of SciencesAt the current rate of spread, the number of cases in the country could rise to 50 million by June 11, with 400,000 deaths.

The model says that a 15-day national lockdown could save an estimated 100,000 lives and prevent an estimated 20 million people from contracting the virus. Depending on the model, the longer the closure, the more the number of cases will be reduced.

However, a national lockdown has its own health risks, especially for the poor in India.

About 100 million people in India are migrant workers, mostly from rural areas who moved to the cities to work. During the first period of isolation, many were left without work or food, causing a mass exodus from the cities.

With the national rail system suspended and national borders closed, hundreds of people tried to make the journey home on foot for many weeks and thousands of miles. Many did not make it, dying of exhaustion, dehydration, starvation or accidents on the road.

People walk through a deserted alley during a government-imposed lockdown amid rising COVID-19 cases, in New Delhi on May 16, 2021.

“The experience of the past year has shown us that economic closures are the most damaging for the poorest sectors of society,” says a april report of the Lancet Covid-19 Commission India Task Force. “In urban areas, day laborers, informal sector workers and low-skilled workers are the most likely to be impoverished by closures of economic activities.”

Ajnesh Prasad, professor and holder of the Canada Research Chair at Royal Roads University Business School, said that only a “certain class of individuals” can afford to stay home and maintain physical detachment.

“If we talk about the urban poor, it is impossible for them to comply with these directives,” said Prasad. “They will tell you that following these directives would be equivalent to starving.”

In densely populated slums, an entire family often lives in a small room and shares a bathroom with other families. It is impossible to distance yourself from others, and it is unrealistic to expect movement without risk of transmission of the virus.

The things that make a lockdown feasible and effective, such as staying home, working and attending school remotely, physically distancing yourself, require access to a stable Internet connection and resources such as laptops and electricity. These luxuries are simply not available to the vast majority of Indians, most of whom do not even have access to doctors or oxygen as the second wave overwhelms major cities.

Millions of people in poverty

India’s precarious economy also makes it much more difficult for the government to impose a second national shutdown.

The first shutdown plunged much of the country into a spiral of poverty: the number of people earning $ 2 a day or less in India is estimated to have risen by 75 million due to the Covid recession, according to the Pew Research Center.

“The shutdown had a huge economic and social impact,” said Chandrika Bahadur, chair of the Lancet Covid-19 Commission India Task Force. “The suddenness of the announcement meant… that the vast majority of the country was unprepared in terms of the implications for income, food, tenure and security. And in turn, both the central and state governments were not prepared for the migration crisis.

The economic turmoil of the first shutdown has also left the Indian government with “less room for political maneuver,” Bahadur added.

India has a weaker financial system than countries like the United States or the United Kingdom, for example. There are less money and fewer systems to send it to those who need it most.

In some parts of the country ration kits were distributed to the poor during the first shutdown, but that was not enough to keep people at home. They still needed to earn a salary to feed their families.

“Without a government that establishes a solid system of social support through public policies, which would appear in the form of social assistance programs such as stimuli or subsidies, a shutdown is not feasible,” said Prasad of Royal Roads University.

In early April, when cases began to increase in the capital, New Delhi, many migrant workers returned to their home towns even before restrictions were imposed. Many feared that a surprise shutdown could leave them stranded once again.

India’s varied topography causes population density to be concentrated in specific nuclei, and although the virus can spread everywhere, its effects are felt most intensely in cities such as Delhi, Mumbai and Bangalore. Each state also has a different level of resource availability, including health care capacity.

A nationwide lockdown would leave little room for state and local governments to respond to the pandemic in ways appropriate to their local circumstances. Right now, some states have night curfews, restrictions on public transportation, and localized measures in certain districts.

Indian police remain at a checkpoint after West Bengal announced a 15-day lockdown to curb the spread of the coronavirus, in Kolkata on May 16, 2021.

In its April report, the Lancet Covid-19 Commission India Task Force recommended that there be no “blanket shutdown at the national or state level.”

Instead, he backed measures such as closing venues for large gatherings and encouraging office workers to work from home, but urged the government to minimize restrictions for the rural and urban poor.

Bahadur said the Task Force now calls for localized but synchronized closures based on two variables: the spread of the disease and medical preparedness.

Modi agreed with these recommendations in his April speech, calling on state leaders to focus on “micro containment zones” rather than total closures.

Union states and territories are now adopting this approach, for example Delhi has imposed several consecutive closures for short periods of seven or ten days, with exceptions for many categories of essential workers, as opposed to the first closure last year.

“The basic point is that there are no simple yes or no answers to a very complicated set of questions,” Bahadur said.

“In a country with so much diversity, localized decisions, driven by a common approach based on science and evidence, with a strong coordinated response is our best bet for success.”

1 thought on “ANALYSIS | Calls for a new confinement of India are growing across the country. That is not realistic”