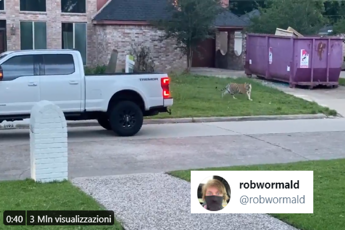 “Apparently there’s a tiger on the loose on my parents’ street in West Houston.” Thus, with a tweet that went viral, user Rob Wormald posted the incredible images of a tiger walking around the residential streets of the Texan city. The big cat would belong to Victor Hugo Cuevas, a 26-year-old accused of murder and now on the run from the police with the tiger he kept at home. Read also The images spread on Twitter prompted the agents to intervene. When they arrived, the tiger’s owner put the animal in a white Jeep Cherokee and left, managing to lose track of himself after a short chase. Cuevas was charged with murder in November in nearby Fort Bend County and was released on $ 250,000 bail. The Houston police on Twitter urged anyone who spotted him to notify the authorities. pic.twitter.com/TgdIiPSPKx— robwormald (@robwormald) May 10, 2021