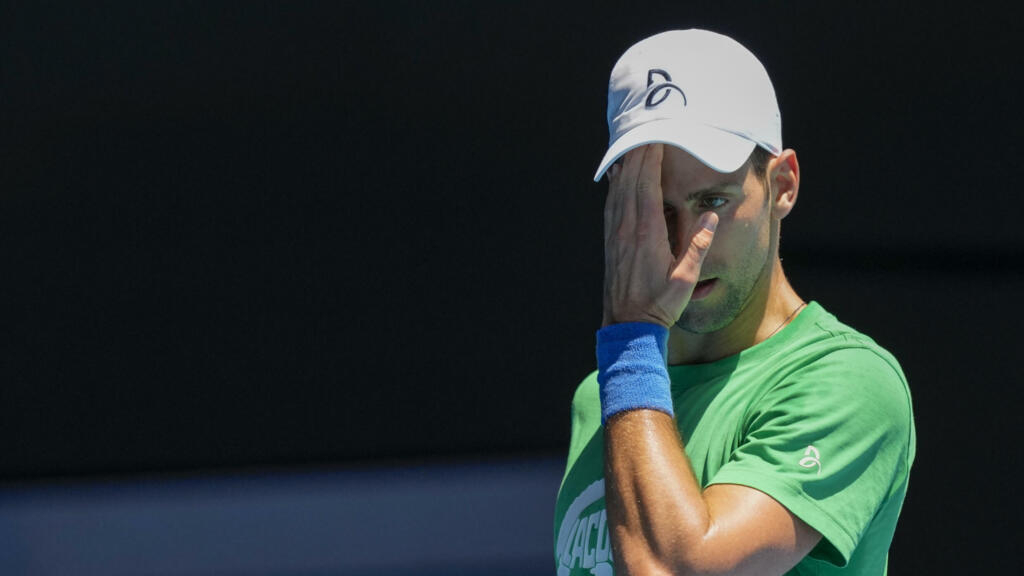 Since his arrival on Australian soil on January 5, Novak Djokovic has continued to make headlines. The case, after many twists and turns, should normally be concluded on Sunday: the fate of the world No. 1 in men’s tennis, again waiting in a detention center in Melbourne, must be decided by a Federal Court.

Novak Djokovic against the Australian State: game, set and match? The world No. 1 in men’s tennis thought he had scored points since his arrival in Australia on January 5, with a legal success overturning the cancellation of his visa. But the Australian executive finally decided otherwise, Friday January 14, by canceling his visa a few days before the start of the Australian Open. A Federal Court will have to decide definitively, Sunday, on the fate of “Nole”.

1- Why did justice first agree with Novak Djokovic?

Novak Djokovic, with a “medical waiver” issued by the Australian Federation, arrives in Melbourne on the evening of January 5 for his participation in the Australian Open, which begins on January 17. Nine hours after landing, and after an interview with the border police where he was notably criticized for not having completed the correct form to enter the country, the tennis player learned on the morning of January 6 that his visa had been cancelled. His lawyers filed an appeal against his expulsion from Australia and obtained a reprieve until January 10.

In the meantime, Novak Djokovic is placed for several days in a detention center, the Park Hotel in Carlton, in the suburbs of Melbourne – where are also detained dozens of refugees, sometimes for years. On January 10, the Australian judge responsible for ruling on the case, Anthony Kelly, orders the immediate release of Novak Djokovic. For him, if the authorities had given him time, he “could have consulted other people and presented arguments to explain why his visa should not be canceled“.

An Australian government lawyer warns, however, that the executive can still decide to deport him, which would result in Novak Djokovic being banned from entering the territory for three years.

Meanwhile, Australian tennis boss Craig Tiley defends his federation against criticism accusing him of misleading players about regulations to enter the country, saying the government had ‘refused’ to check the validity of medical exemptions prior to their arrival.

2- Why did the government finally cancel his visa?

The threat of Novak Djokovic being sent off was in the air even before he arrived on Australian soil. While he had not yet landed, the Australian government warned the tennis player on January 5 that “anyone wishing to enter Australia must comply with our border requirements”, according to Prime Minister Scott Morrison. And to add: “If Novak Djokovic is not vaccinated, he must show acceptable proof that he cannot be vaccinated for medical reasons. Thus, we are waiting for the proof that he will provide us, and if that these are not enough, he will not be treated differently and we will send him back on the next plane.”

The Australian justice first proved the executive wrong by suspending the expulsion of the world No. 1 in men’s tennis and restoring his freedom of movement in Australia. But that was without counting on the ultimate legislative weapon available to the government, and brandished on Friday January 14: Alex Hawke, Australian Minister for Immigration, appealed to his “personal power to cancel” a visa, by virtue of section 133C(3) of the Migration Act.

“I exercised today (Friday this) power (…) to cancel the visa held by Mr. Novak Djokovic for reasons of health and good order, on the grounds that it was in the public interest to do”, says the press release from the Australian Department of Immigration. According to Alex Hawke too, Novak Djokovic’s presence in Australia “could encourage anti-vaccination sentiment”.

The tennis player declared himself opposed to vaccination in April 2020, during a live on Facebook with other Serbian athletes: “Personally, I am opposed to vaccination, and I would not like to be forced by someone to take a vaccine in order to be able to travel”, he had declared. “But if it becomes mandatory, what will happen? I will have to make a decision. I have my own thoughts on the matter, as to whether those thoughts will change at some point, I don’t know.”

Australian Prime Minister Scott Morrison meanwhile defended an approach to protect Australia in times of the Covid-19 pandemic: “Australians have made many sacrifices during this pandemic and rightly want the outcome of these sacrifices are protected”.

A new court hearing took place after this decision on Friday. Novak Djokovic’s lawyer, Nick Wood, then argued that the decision to cancel Novak Djokovic’s visa a second time was “obviously irrational”, believing it was a “radically new approach” – compared to the first abortive deportation – by the Federal Government to deport the tennis player from Australia. A federal court is due to consider the defense’s appeal against the second deportation on Sunday.

3- What is the reaction of Australian public opinion?

The feeling of a “double standard” has been shared in Australia since the start of the affair. The granting of a “medical waiver” to Novak Djokovic was from the start a subject of indignation in a country which has been one of the most affected by health restrictions since the start of the Covid-19 pandemic, the beginning of 2020. Australia only reopened its borders in early November 2021, after more than a year and a half of being closed to foreigners and Australian citizens. Melbourne, where the Australian Open is to take place, is also the city that has experienced the longest confinement in the world: 262 days in total.

“This announcement (of obtaining a derogation, editor’s note) caused an outcry in Australia”, as explained on Jan 6 Grégory Plesse, France 24 correspondent in Sydney. The Australian press has, for the most part, expressed its “shame” to speak of the case of Novak Djokovic upon his arrival in the country. “Here, we did everything we had to do, 95% of people are vaccinated, we respected the rules, we couldn’t see our families abroad. And there, there is Mr. Djokovic and the rules are changed for him”, was indignant for example an Australian interviewed by RTL.

The indignation against “Nole” was even pushed to its extreme with a TV sequence where two journalist presenters from the Australian channel Channel 7, believing themselves to be off the air and the microphones cut,have called this week a “liar” in front of the camera.

4- Did the tennis player lie in this case?

Novak Djokovic’s statements, the evidence of his lawyers provided to Australian justice and his publications on social networks were combed through by several media during the week. On January 8, when the tennis player is still in detention, his lawyers tell the courts that he has obtained an exemption from vaccination because he tested positive for a PCR test on December 16.

January 11, the German newspaper Der Spiegel casts doubt on the dating of this test. “The numerical data suggests that the test results are not from December 16 at all. In the numerical results there is a time stamp of 2:21 p.m. Serbian time on December 26,” the weekly reads. . A gray area still remains today on the authenticity of this test.

Still, in the chronology assumed by the world No. 1 in men’s tennis, on December 16 he attended the launch of a stamp bearing his image in Serbia. The next day, he took part in a meeting with young tennis players to whom he presented trophies indoors, without a mask. December 18, he meets a journalist and a photographer from the French daily newspaper L’Équipe for an interview during which he is always masked, except for the photo shoot.

Critics quickly focused on the fact that Novak Djokovic could have infected other people by continuing his activities when he was positive for Covid-19. The tennis player defended himself from these accusations and justified himself, on January 12, in the face of what he described as “misinformation”.

“I want to emphasize that I have done my best to ensure everyone’s safety and my compliance with testing obligations,” he said. Regarding his meeting with young Serbian tennis players, Novak Djokovic claims to have carried out an antigen test with a negative result before meeting them. “I had no symptoms, I felt well and I had not received the notification of the positive PCR before the end of this event”, he assured.

He knew, however, that he was positive when giving his interview to L’Equipe. “I felt compelled (…) because I didn’t want to let the journalist down, but I made sure to respect social distancing and wear a mask, except when my photo portrait was done,” he says. . The Serb recognizes “an error in judgment” and admits that he “should have postponed this engagement.”

5- What will happen on Sunday, the day before the Australian Open?

Novak Djokovic was again placed in detention at the Park Hotel in the suburbs of Melbourne, on Saturday January 15, pending his fate being definitively decided during an interim hearing on Sunday before a Federal Court.

In his pleadings filed in court on Saturday, Australian Immigration Minister Alex Hawke argued that Novak Djokovic’s presence in the country “is likely to pose a health risk to the Australian community”, encouraging “anti-vaccination sentiment “and could even “lead to an upsurge in civil unrest”.

The Court, which will meet the day before the start of the Australian Open, will have two options. She can give reason – the most probable hypothesis – to the Australian executive, which decided to resort to a discretionary legal provision to obtain the expulsion of Novak Djokovic. In this case, the tennis player could also see his expulsion accompanied by a ban on entering Australia for three years.

Another possibility: the Court cancels the expulsion of Novak Djokovic for the second time in a week, and the latter could then participate in the Australian Open on Monday. The world No. 1 was also integrated, on January 13, into the competition table in the event that he could participate. The 34-year-old is seeking a 10th victory in this tournament, which would constitute a 21st Grand Slam title, an absolute record.

But in this case, the relations of the Serb with the other tennis players and the public could be very fresh. One of his great rivals, Rafael Nadal, notably declared on Saturday that “the Australian Open is much more important than any player”.