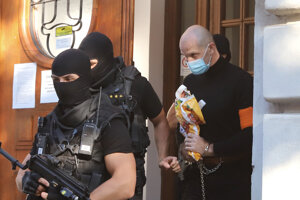 The prosecutor decides on filing a petition with the court.

BRATISLAVA. The investigator of the National Criminal Agency asks the prosecutor of the Office of the Special Prosecutor’s Office to file a motion to prosecute the accused Nitra businessman Norbert Bödör.

TASR was informed about this by Andrea Dobiášová from the Presidium of the Police Corps.

The prosecutor should decide in the coming hours whether the detention order will be filed in court.

“The investigator submitted a file with an initiative to file a motion to take the accused into custody,” Dobiášová told TASR.

Nitra businessman Norbert Bödör was detained on Thursday in connection with the Valčeky case.

The Purgatory and Cattle cases, where the trial is due to begin in February this year, are also facing charges.