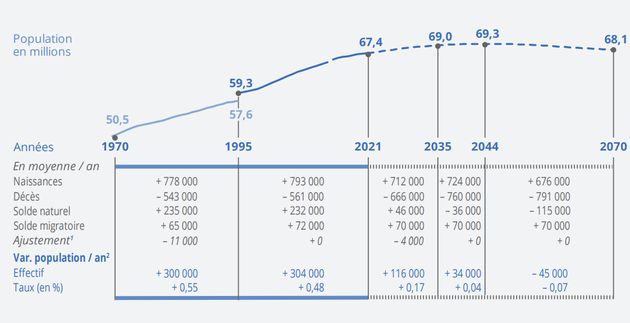 FRANCE – What will France look like in 50 years? To this question, INSEE provides an answer on Monday, November 29, concerning population of our country in 2070. To do this, the statistical institute extended the demographic trends observed in recent years in our country after having gathered the opinions of forty experts on the options to be retained.

Evolution of the French population by 2070.

Insee projections establish a natural increase in population until 2035 (there will be more births than deaths) before this natural balance eventually reverses. Between 2035 and 2044, the migratory balance (difference between the number of arrivals on our soil and the number of departures) will make it possible to compensate for the natural balance. This explains why the population will increase. However, from 2044, this migratory balance will no longer compensate for the natural balance, which will lead to a total decline in the population.

An older and less feminine France

If the population of 2070 will be globally close in number to that of 2021, INSEE therefore predominantly foresees a change in the structure of this demography. Above all, this study highlights the aging of the population. Two figures illustrate this: by 2070, France will see the number of over 75s increase by 5.7 million while that of those under 60 will decrease by 5 million.

Also, parity will be closer in fifty years. While women today represent 51.7% of the population, they will be only 50.8% in 2070. “This rebalancing would be carried out especially at ages of high mortality”, notes INSEE explaining this in particular by “The differences in life expectancy between women and men which would continue to decrease”.

These projections are obviously subject to possible changes in mentality. For example, INSEE mentions the fact that if the fertility rate drops to 1.6 children per woman (the projection is made on the basis of 1.8 against 1.83 at present), the population of 2070 will count 4 million people less than expected.

Also to listen on The HuffPost: Having children, is it irresponsible for the environment?