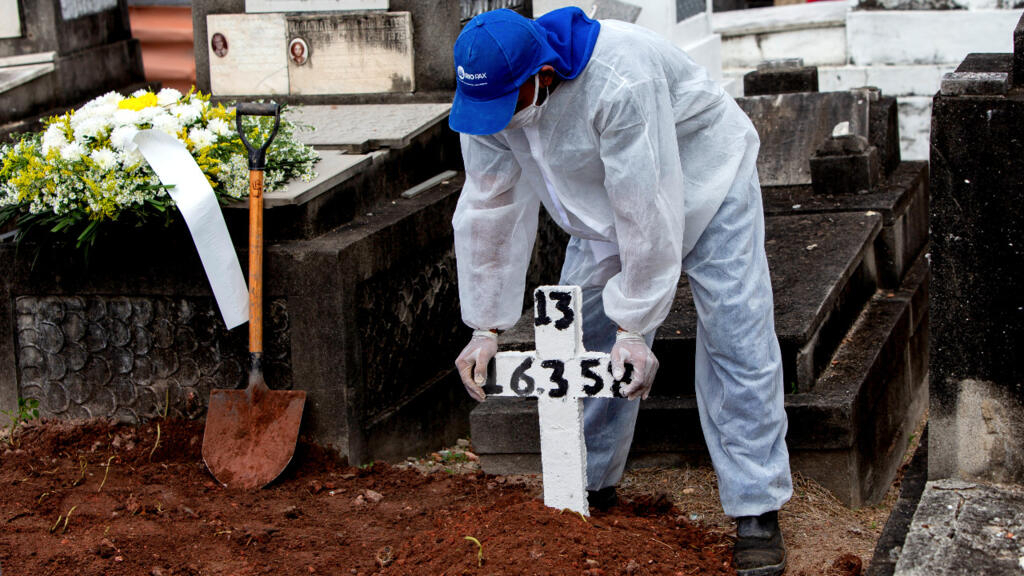 The slowness of vaccination, the early lifting of restrictions and the active circulation of variants raise fears of a deadly third wave in Brazil, which should reach 500,000 deaths from Covid-19 by the end of the month, with one of the worst rates of mortality in the world.

Mourning over the coronavirus pandemic, Brazil is living a never-ending drama, with the threat of a devastating third wave due to the slow pace of vaccination, the early loosening of restrictions and the rampant circulation of variants.

This country of 212 million inhabitants is expected to reach 500,000 deaths from Covid-19 by the end of the month, with one of the worst death rates in the world, at more than 220 per 100,000 inhabitants. Some epidemiologists fear that the third wave will be even more deadly than the first two.

And unlike in European countries, there is no real lull between the waves: since mid-May, the death curve has stabilized on a very high plateau, with an average of around 2,000 daily deaths. The contaminations curve has been steadily rising in recent weeks, a direct consequence of the relaxation of restrictive measures affecting the population.

This increase in the number of infections while mortality remains high risks causing “a worsening of the health crisis”, warns Fiocruz, a benchmark public health institute, in its latest epidemiological bulletin.

At the time of the peak of the second wave, in March and especially in early April, when Brazil recorded two days with more than 4,000 deaths, most mayors and state governors imposed a curfew and the closure of businesses. non-essential. But these restrictions were lifted after a few weeks, far too early, according to specialists.

“In Brazil, an unprecedented health disaster has become commonplace. Most people live as if there was no pandemic,” José David Urbáez, of the Brasilia Center for Infectious Disease, told AFP.

Another source of concern: the Delta variant, which appeared in India, with the first cases confirmed in recent weeks in Brazil in people who have stayed in the Asian country.

The third wave is likely to hit the country head-on at the time of the Copa América, a football tournament that the far-right President Jair Bolsonaro has decided to welcome with open arms after the withdrawals of Argentina and the United States. Colombia.

The competition is due to start on Sunday, but rumors of a boycott of players have cast doubt and the mayor of Rio de Janeiro has threatened to ban matches in his city if the health situation worsens. And it is not about to improve, in a country where only 10.8% of the population has been immunized with two doses of the vaccine.

In a presidential address last Wednesday, Jair Bolsonaro promised that “all Brazilians” would be vaccinated by the end of the year, a goal difficult to achieve, according to specialists.

In this televised speech heckled by deafening pot concerts in the country’s major cities, the president said that Brazil was “one of the countries that experienced the strongest economic growth in the first quarter (+ 1.2%)” because he had “not made anyone stay at home”.

Despite these encouraging economic data, unemployment reached a record level in the first quarter (+ 14.7%) and the health situation continues to deteriorate.

“If the vaccination fails to offset the negative impact of the relaxation of restrictions, the third wave could be strong,” said Mauro Sanchez, epidemiologist at the University of Brasilia (UNB).

The benefits of mass vaccination were demonstrated during an experiment conducted by the Butantan Institute in Serrana, a city of 45,000 inhabitants in the state of Sao Paulo (south-east) where 95% of adults were immune. The death toll from Covid-19 has fallen by 95%, and hospitalizations by 86%.

“The pandemic has been controlled in Serrana and the same can be done throughout Brazil,” said the governor of Sao Paulo, Joao Doria, a fierce opponent of President Bolsonaro.

The head of state had notably criticized the agreement signed by Joao Doria with the Chinese laboratory Sinovac for the local production of the Coronavac vaccine, which represents nearly 60% of the doses injected to date in Brazil.

1 thought on “Covid-19: concern in Brazil about an even more deadly third wave”