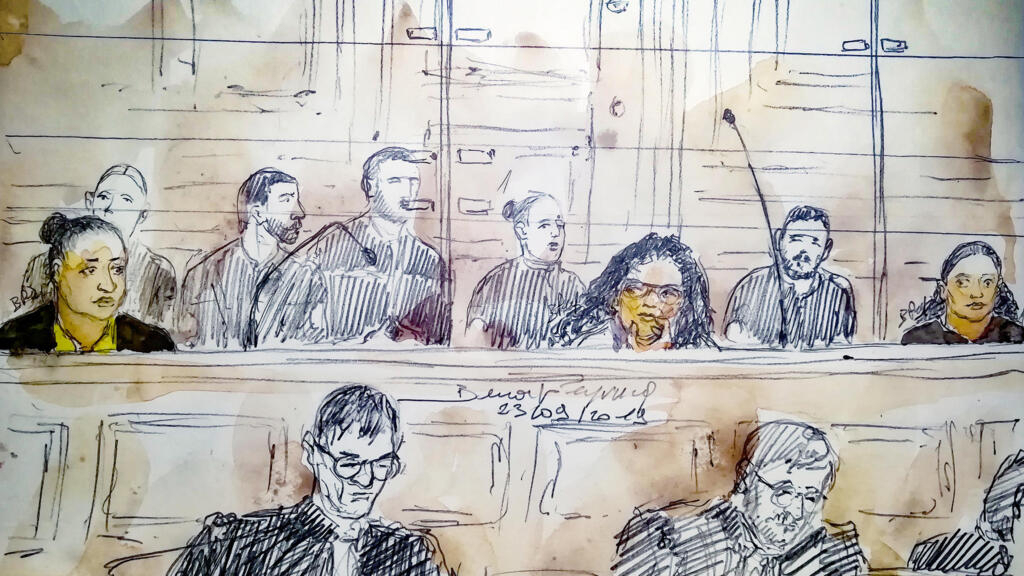 The Paris Special Assize Court confirmed on Monday the sentence imposed at first instance on Inès Madani, a 24-year-old young woman on trial for a failed attack on gas cylinders near Notre-Dame in 2016. The sentence was increased. , with a security period, in accordance with the requisitions of the Advocate General.

She admitted to having wanted, five years ago, to make “a carnage”. Despite her promise to have “changed”, Inès Madani was sentenced, Monday, June 7, on appeal, to thirty years of criminal imprisonment, two-thirds of which was security for a failed attack on the gas cylinders near Notre-Dame.

The Paris Special Assize Court confirmed the sentence imposed at first instance on the 24-year-old young woman, but this time with a security period, in accordance with the requisitions of the Advocate General.

“It is quite rare that a court of assizes of appeal aggravates a sentence. And I hope that this is not a signal which is given as the announcement of a case law, which would constitute to say to the accused” Do not appeal ‘”, noted one of Inès Madani’s lawyers, Me Tewfik Bouzenoune.

Inès Madani “has evolved since the facts and will continue to evolve. (…) It is not a decision of hope,” lamented his defender after the verdict.

The reason for the decision, rendered after five hours of deliberation, was not immediately known.

On the night of September 3 to 4, 2016, Inès Madani, then aged 19, and another jihadist, Ornella Gilligmann, parked a car containing six gas cylinders in front of the crowded terrace of a restaurant near Notre-Dame de Paris, and had tried to set it on fire with diesel. Only this poor choice of this fuel, hardly flammable, made it possible to avoid a deadly explosion.

“The objective was obviously to mow as many lives as possible”

Inès Madani was sentenced in October 2019 to thirty years in prison. Deeming this excessive punishment, she appealed. Not Ornella Gilligmann, sentenced definitively to 25 years of criminal imprisonment.

Throughout the procedure, and again during the debates before the special assize court ruling on appeal, the two women had deferred responsibility and preparations for this attack, inspired by the French propagandist of the Islamic State (IS) group. Rachid Kassim.

“It does not matter” who did what, had estimated the Advocate General Guillaume Portenseigne, during his requisitions on Friday. That night, he underlined, “the objective was obviously to mow down as many lives as possible, to cause carnage”, as recognized by Inès Madani.

The latter had also shown “unwavering determination” to pursue its criminal project, pointed out the representative of the prosecution.

After the failed attack, she had, guided by Rachid Kassim, joined two other jihadist women in Boussy-Saint-Antoine to prepare an attack with Molotov cocktails. Knowing that she was being hunted down by the police, Inès Madani was arrested in this commune of Essonne on September 8, 2016 as she walked, a kitchen knife in her hand, towards a DGSI police officer.

The Assize Court also found her guilty of attempted murder on this policeman.

His lawyer, Me Laurent-Franck Liénard, welcomed in the decision of the seven professional magistrates ruling on appeal “a strong message”. “It is a judicial hand that does not tremble in the face of terrorism”.

In her last words before the court withdrew to deliberate, Inès Madani said “(regret) sincerely” the facts and “their seriousness”.

“Today, I am not the same person as five years ago”, assured the young woman, black jacket on white shirt and brown hair held up in bun, presenting herself as a “repentant” of the terrorist group tat Islamic.

Radicalized at the age of 16, Inès Madani was sentenced in another case, in April 2019, to eight years of imprisonment for her role as recruiter of radicalized young people, many of them women. On social networks, she was posing as a jihadist fighter, not hesitating to disguise her voice.

It was through this that she had met Ornella Gilligmann, who fell madly in love with this masculine double.

The special assize court also increased the sentence handed down at first instance against Mohamed Lamine Aberouz, from three to five years’ imprisonment, for the offense of not denouncing a terrorist crime. His lawyer Vincent Brengarth, who had pleaded for acquittal, has already announced a cassation appeal.

1 thought on “Failed attack near Notre-Dame: Inès Madani sentenced on appeal to 30 years in prison”