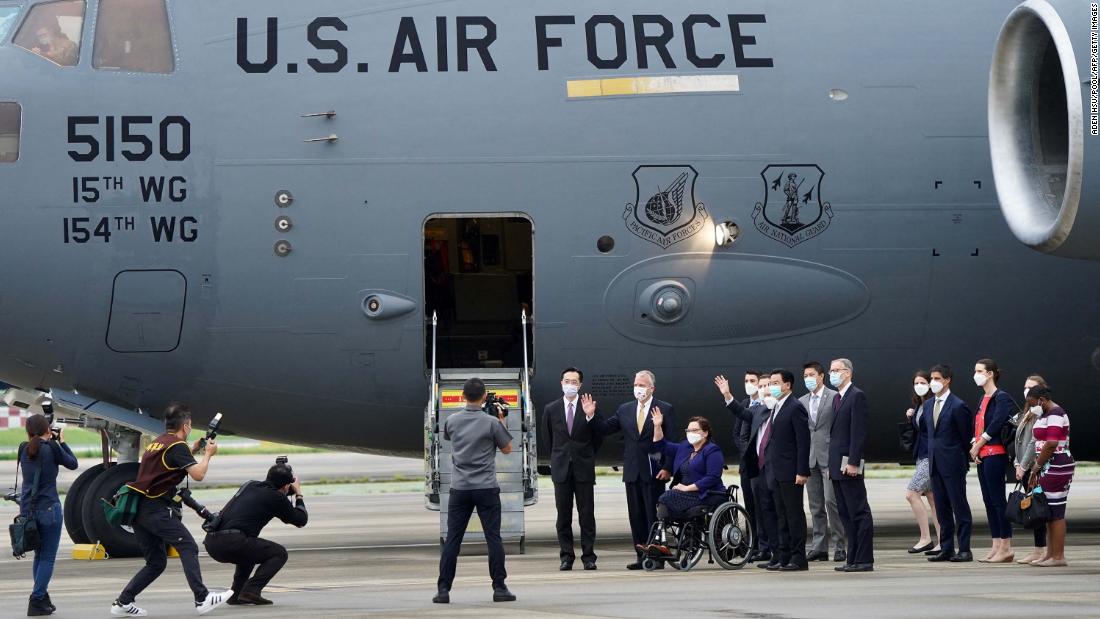 (CNN) – Taiwan is finally beginning to get the help it needs from the United States to fight its growing coronavirus outbreak. But for China, the offer is a huge provocation that runs the risk of aggravating relations between the two sides of the strait and between Washington and Beijing.

A delegation of US senators visited Taiwan on Sunday morning local time to announce the donation of 750,000 doses of the covid-19 vaccine. Taiwanese President Tsai Ing-wen called the vaccines a “timely rain” for the island, which has only vaccinated 3% of its population and which on Saturday recorded the highest number of daily deaths from coronavirus, with 37 deaths .

“It was critical for the United States that Taiwan be included in the first group to receive vaccines because we recognize their urgent need and value this partnership,” Sen. Tammy Duckworth said during the three-hour visit.

The donation is likely to draw ire from Beijing, which has resented Taipei’s apparent refusal to accept its offer of Chinese-made coronavirus vaccines. Taipei, for its part, has accused Beijing of blocking its efforts to buy vaccines internationally, rather than trying to help.

Delivering his welcoming speech to American visitors on Sunday, Taiwanese Foreign Minister Joseph Wu again criticized Beijing. “While we are doing our best to import vaccines, we must overcome obstacles to ensure that these life-saving drugs arrive safely from Beijing. Taiwan is familiar with these kinds of obstructions, ”he said.

The arrival of the C-17 military transport

But the biggest wake-up call to Beijing may not be Wu’s comments or the vaccine donation agreement itself, but the US military plane parked on the tarmac.

A group of United States senators in front of the C-17 Globbemaster III military cargo plane upon its arrival at Songshan Airport in Taiwan on June 6.

The US delegation arrived at Taiwanese Songshan Airport in a US Air Force C-17 Globemaster III cargo aircraft, the main strategic transport aircraft of the US Army.

Previously, US officials and politicians had flown to Taiwan on the C-40, a military version of the Boeing 737 commercial jet, according to the Taiwan Central News Agency.

The presence in Taiwan of a US military transport plane capable of carrying troops and cargo – including artillery, tanks and helicopters – is likely to trigger a strong response from Beijing.

The nationalist state tabloid Global Times has already lashed out at the unusual choice of the plane. “They want to make the landing of the C-17 on the island a fact that must be accepted by the mainland, paving the way for the United States and Taiwan to continue to intensify their collusion,” he said in an editorial on Sunday.

In a separate report, the newspaper quoted Lu Xiang, an international relations expert at a government-backed think tank, as saying the visit was “the gravest provocation” by the US since Biden took office, and that Beijing “will not sit idly by.”

Previously, China’s state media had already threatened to go to war in response to the presence of US military aircraft in Taiwan. Last August, amid reports that a US Navy spy plane may have taken off from Taiwan, the Global Times said Taipei and Washington were “playing with fire.”

“If the island has enabled the takeoff and landing of US military aircraft, it is crossing the red line of China to safeguard national unity. This will be very serious, ”he said in an editorial on August 31.

“If China has conclusive evidence, it can destroy the corresponding airport on the island and the US military planes landing there: this will start a war in the Taiwan Strait.”

However, in its editorial on Sunday, the Global Times appears to have toned down its bellicose speech, calling instead for prudence in Beijing’s response.

“We have the real freedom to take the measures we deem necessary. What we must bear in mind is that the effects must be positive and the political benefits must far outweigh the costs, “he said.

Covid: the pandemic “is far from over”, according to the WHO