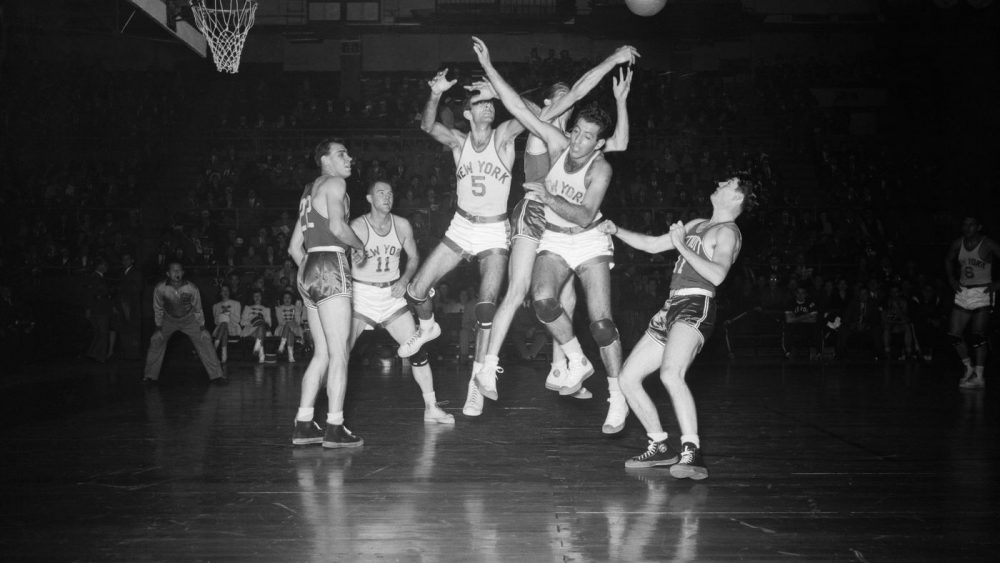 Friday November 1, 1946, Toronto. The scene of the very first game in BAA history (the ancestor of the current NBA, which would see the light of day in 1949 when merged with the NBL), Maple Leaf Gardens welcomes some 7,090 people on this fall evening in the province. from Ontario. Everyone flocked to the bays of the Canadian hall, usually used for ice hockey matches, to attend this historic poster (the only one scheduled that day) between the Toronto Huskies and the New York Knicks.

These are two of the league’s original eleven franchises, along with the St. Louis Bombers, Washington Capitols, Boston Celtics, Detroit Falcons, Pittsburgh Ironmen, Cleveland Rebels, Chicago Stags, Providence Steamrollers and the Philadelphia Warriors. Divided into two divisions (West and East) and bringing together 160 players (all white), they all played 60 matches each, during this inaugural 1946/47 exercise.

First professional basketball league to organize its meetings in the large metropolises of the Midwest and Northeast of the United States (and Canada), under the impetus of the owners of the big halls, and then directed by the commission Maurice Podoloff (until 1963), who then gave his name to the current MVP trophy, the BAA therefore chose the Huskies and the Knicks to take part in the first meeting in its history.

Three quarters of a century later, the NBA chose to pit the Raptors and the Knicks against each other (12:30 a.m. next night), but in New York and not in Toronto this time around, to celebrate this 75th anniversary with great fanfare. .

The Knicks, the first winners in history

History retains, in any case, that it was the Knicks who won on the field of the Huskies, after 48 minutes (divided into four quarters), on a final score which is now reached in l ‘space of maximum three quarters of time (not to say two): 68-66!

Led in particular by Leo Gottlieb (14 points), the New York franchise had been able to resist 18 points from Ed Sadowski (coach / player from Toronto!), As well as 16 units from George Nostrand. Note that the Italian Hank Biasatti became the first non-American to step onto a BAA (or NBA) floor.

History also holds that it was Ossie Schectman, then New York point guard, who scored the very first basket in the league. Without imagining that it would be the first of a long, very long list, since there are, to date, precisely 4,907,937 baskets!

Free ticket for the “giants”!

For the little anecdote, know that anyone taller than the hub of the Huskies, George Nostrand (2m03), could enter… for free (!) Maple Leaf Gardens, but no spectator large enough had shown up to take advantage of the offer, while a bagpipe group was performing that evening, which still exists today: the “48th Highlanders of Canada Pipes & Drums”. Otherwise, you had to pay between 0.75 and 2.50 dollars to get a ticket, or between 10 and 35 dollars today, taking inflation into account.

A whole different era. This is also evidenced by the fact that salaries were so low that the players had to work during the offseason, and that the accounts of all the teams were very quickly in the red.

This did not, however, prevent Joe Fulks Warriors to win, at the end of the campaign, the first title in history, against the Stags (4-1). Just before the BAA has only eight franchises in its ranks, at the start of the 1947/48 fiscal year, due in particular to the disappearance of the Huskies (only one small season in the league). Huskies who, despite their defeat and their rapid extinction, nonetheless remain an iconic team, thanks to their participation in this first meeting of all time.

1 thought on “75 years ago, Toronto and New York met in the first game in BAA history … – BasketUSA”