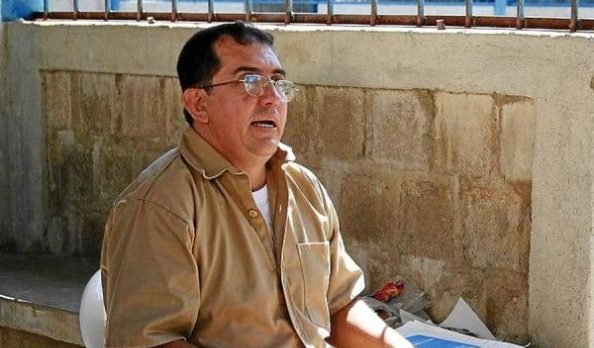 (CNN Spanish) – The possibility that Luis Alfredo Garavito, known as ‘La Bestia’, one of the most dangerous serial rapists of children in Colombia and the world, will be granted parole, sparked controversy in the country. However, a judge denied the request made by the National Penitentiary and Prison Institute (Inpec) of Colombia.

The controversy occurred after a television report on the program ‘Los Informantes’, by Caracol Televisión, in which it was reported that the Inpec requested the conditional release of Luis Alfredo Garavito, a child predator who raped and killed almost 200 of them in the 1990s, and who has paid 40 years in prison since 1999.

Garavito, the worst serial killer in the world, pays his sentence in the “La Tramacúa” prison in Valledupar, a city in the north of Colombia.

According to the Los Informantes report, which cites a court document, it was Inpec that requested Garavito’s conditional release.

But Inpec denies that it has requested Garavito’s release. Instead, he says that he complied with the delivery of the documents before the First Court for the Execution of Penalties and Security Measures of Valledupar. CNN has not been able to access the documents of the Inpec or the court.

Citing various laws, Inpec said in the statement that “it is under the obligation to deliver this documentation” to the court, and that it acted “in accordance with the legal postulates and in accordance with the norm and the Law,” since it has already complied 3 / 5 parts of his sentence. (In 2006, he was reduced to 24 years for informing authorities of the whereabouts of some children’s bodies.)

A CNN review of the legislation cited in the statement does not establish in any of them that Inpec must request the release of the prisoners.

One of the laws cited by Inpec is the article 471 of the Code of Criminal Procedure. According to the prison establishment, “when the foreseen circumstances are fulfilled, the Inpec must send the documentation.”

But what this article says is that it is “the condemned man” who must request his conditional release from the sentence enforcement judge. But it does not establish that the Inpec should request that freedom.

The Inpec Communications Office told CNN that this procedure “is part of the work of the prison legal offices,” but did not clarify whether Garavito or his defense requested his conditional release or if it was an initiative of INPEC. In addition, Garavito will not leave yet because he has more accumulated penalties and is accused by other processes.

“There are 18 convictions and 26 judicial processes are currently underway as a defendant. Consequently, Luis Alfredo Garavito will continue to be held in the maximum security prison in Valledupar,” Major General Mariano Botero said on Twitter. director of Inpec.

The first judge for the execution of the sentence of Valledupar affirmed that it was the Inpec that requested Garavito’s release and that after reviewing it, it denied his provisional release, so that, until now, Garavito will remain in prison serving his sentence.

“Based on a request by the Inpec for conditional release, the court denied him that benefit for not complying with all the requirements required by the norm. Although it has 3/5 parts [de la pena] fulfilled. However, as it has not paid the damages, that is a legal issue to deny the benefit “, he told Los Iinformantes Camilo Manrique Serrano, first judge for the execution of sentences in Valledupar, who is handling the case.

“It can be said that if Luis Alfredo Garavito Cubillos does not cancel the material and moral damages, lost profits, and consequential damages, consigned in each conviction, he supposedly does not have the right to freedom,” he added.

CNN has not been able to establish whether CNN has an attorney to represent it.

Garavito would have to pay a fine of 172 current monthly minimum wages, according to local media, just over US $ 41,000.

Garavito could not receive parole

“When the 3/5 of his sentence is completed, that documentation is sent to him, and the judge studies that process and he decides. In the case of Garavito, he studied that process and determined that it was not convenient to generate conditional release”, Major General Mariano Botero, Inpec director, told Los Informantes.

Now, Garavito will not be able to obtain his parole, because according to the Colombian Penal Code, in its article 64 on parole – which Inpec cites in its statement – says that parole will not be given when the penalty imposed is for, among others, the crimes of “use of minors for the commission of crimes.” . Garavito murdered 186 children (including two murders in Ecuador) and raped 200, as he himself confessed in 1999, before being sentenced to 40 years in prison for these events.

The crimes of Garavito

Luis Alfredo Garavito was born in 1957 as the first-born of a family that would grow up with six other children in Genoa, department of Quindío in the heart of Colombia’s coffee-growing zone. His childhood, according to what the writer Harold Schechter recorded in his book “The Serial Killer Files”, was marked by abuse. Schechter explains that Garavito was “subjected to constant and brutal beatings by his alcoholic father” and “raped by two adult neighbors.” Hence, he has grown up as an alcoholic and depressed person with suicidal tendencies.

At the end of the 80s, he began to change his residence, after having gone through a psychiatric treatment center.

Since the 1990s, Garavito began to spread terror in Colombia. It attracted its victims by posing as a street vendor, a monk, a homeless person, a person with a disability or even a representative of false foundations for the elderly and children, with the aim of having access to schools, as reported in 1999 by the then attorney general of the country, Alfonso Gómez Méndez, months after capturing this man. “This is unprecedented in Colombia,” said the official.

Schechter points out that “The Beast” first gained the trust of children between the ages of 8 and 16 with his empathy, chatter, and often by buying them alcohol or giving them some money. Then he began to execute his macabre plan, inviting the minors to take a walk through rural areas. “When the children began to tire, Garavito launched the attack. He tied them with nylon, raped them, mutilated them, and then cut their throats or beheaded them, ”wrote the author.

This is a version that was ratified by the then prosecutor Gómez Méndez in 1999, when he spoke of the lurid case. “The bodies were beheaded and showed signs of having been tied and mutilated,” he said, adding that Garavito used to drink a lot and then tie the children. The remains of his victims were discovered in more than 60 places in Colombia. And Garavito had a clear profile: most were children of street vendors who their parents neglected at some point in parks, at traffic lights or who asked for money on the streets. In short, low-income children, some of whom even lived on the streets, according to Schechter.

The crime for which Garavito was caught

For a long time, the Colombian authorities believed that this wave of disappearances and murders of children, in whose cases they also showed signs of abuse, corresponded to some satanic ritual. Until November 1997 the remains of at least two dozen children were discovered in a ravine and in a lot near Pereira, a city in the central coffee growing region. This fact led the investigating entities to create a national working group which found similarities between cases across the country.

Authorities found his name and issued an arrest warrant for the murder of a child in the city of Tunja, in central Colombia. But by that time, Garavito frequently moved around and already had a new name: Bonifacio Morera Lizcano

How did they find it then? First it was in the city of Villavicencio, also in the center of the country. The police captured him in 1999 when he tried to abuse a minor. The Prosecutor’s Office had already been crossing information with its different departments to update the records and be alert to any fact similar to that of the Pereira discovery. It was for this reason that when they compared the photographic record of Garavito and Morera, they realized that it was the same person. By this time, Garavito was a homeless man with a long history of mental illness.

1 thought on “Luis Alfredo Garavito, ‘La Bestia’, the worst serial killer in the world, will not be released from prison soon”