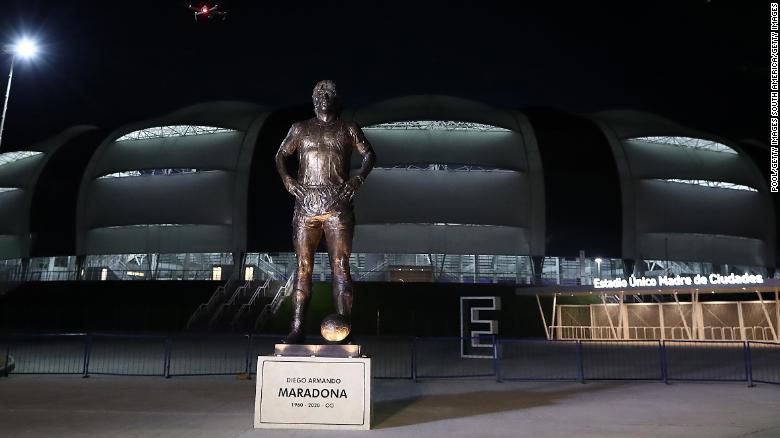 Maradona knew how to sing and this video proves it 3:44

(CNN) – The Argentine team paid tribute to Diego Maradona in his first match since his death, discovering a five-meter statue and wearing his image on their shirts before the start of the match.

Maradona, an Argentine icon and widely regarded as one of the greatest footballers of all time, died after suffering from heart failure in November of last year.

A 5-meter tall statue of soccer legend Diego Maradona is featured at the Sole Mother of Cities Stadium.

In the fifth round of the qualifying matches for the South American World Cup, Argentina and Chile drew 1-1 in Santiago del Estero, Argentina, with a goal from Alexis Sánchez that annulled Lionel Messi’s penalty.

“It is [el partido] special, since it was the first without Diego, “Messi told reporters after the game.

“It would have been nice if there were people in the stadium to pay tribute to him, but what is happening in the country and in the world is complex. We wanted victory and represent the national team like Maradona did ».

Leo Messi celebrates after scoring the first goal against Chile.

Before the start of the match, the national team and the president of the federation were present for the inauguration of the new statue of Maradona outside the Unique Mother of Cities Stadium, where Chile and Argentina played on Thursday.

As the teams lined up on the field before the game, the players wore pictures of Maradona on their jerseys with the year of his birth, 1960, and the infinity symbol instead of the year of his death.

The tie meant that Argentina lost the opportunity to climb above Brazil at the top of the rankings, while Chile remains in seventh place.

This is how Thursday’s games were