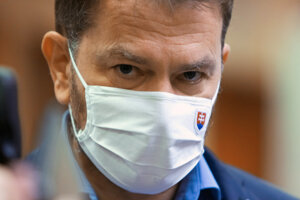 50 of the 136 deputies present voted in favor of Sulík’s dismissal.

BRATISLAVA. Richard Sulík (SaS) has stopped the attempt to dismiss him and thus remains in the position of Minister of Economy. The Plenum of the National Council (NR) held him on Wednesday. 50 of the 136 deputies present voted in favor of his dismissal.

The motion of censure on Sulík was initiated by deputies of the opposition Smer.

Smer voted in favor of expressing no confidence in Sulík, ĽSNS also the majority of non-attached deputies except Tomáš Valášek, Miroslav Kollár, Juraj Sheligu and Jana Žitňanská, who were against. Parliamentary clubs were also against it OĽANO, We are a family and SaS.

Related article OĽaNO will support Sulík. Matovic wants to show that they do not suffer from vengeance Read

The opposition dealt with the ranch and graduation

“The public statements made so far and Mr Sulík’s practical inaction as Minister of the Economy confirm Mr Sulík’s absolute incapacity to perform this extremely important executive function,” MEPs said in a statement of reasons for the proposal.

For example, they blamed him for the situation around rising energy prices, where Sulík did not present a single “rational” solution, according to the submitters. According to them, he did not even manage the preparation and opening of the Slovak pavilion at the World Expo.

Opposition deputies also touched on the issue of acquiring a ranch in Australia or Sulík’s graduation certificate.

The plenary also rejected two motions for resolutions tabled by the President of Smer Robert Fico. In the resolution, he wanted to ask the government to schedule the steps it will take to eliminate the effects of the increase in electricity, gas and heat prices for Slovak households and small and medium-sized enterprises in 2022.

It also aimed to ask the government to proceed in protecting the financial interests of the Slovak Republic in connection with the operation of the Nord Stream 2 gas pipeline.

The second resolution called for Sulík to provide Parliament with written information on the date of acquisition of ownership of the ranch in Australia, its size, purchase price and other co-owners of the property.

The arguments of the opposition party leader Robert Fico were very weak, according to the Minister of Economy.

“In the introductory speech, where he was supposed to substantiate my appeal, he started to deal with my high school certificate. It shows a fairly large emptiness of these arguments,” Sulík said.

He continued that practically the entire clubs OĽANO, SaS and Sme rodina voted against this proposal.

“I would like to thank these Members and so on Igor Matovic (OĽANO) for his statements today, I see it as a welcome gesture on his part, “Sulík said. According to him, this is a strong signal, because it can be seen that he and the party have strong support in the coalition and such steps are recovering it.

“I know an appeal is coming Milan Krajniak (We are a family). There is the strongest argument for me that Krajniak filed a criminal complaint in August. Krajniak can count on 19 deputies for SaS to vote against this appeal, “Sulík responded.

He continued that the Ministry of Economy (MH) is doing everything to ensure that rising energy prices have the least possible impact on households. “In the case of gas, the situation is such that households will have to spend a smaller share of their income next year than last year,” Sulík added.

The minister was not convinced of the direction

The opposition Smer stated in the opinion after the vote that Sulík did not present any real measures to mitigate the consequences of the sharp rise in energy prices.

“With its liberal attitude that the market will solve everything, it endangers at least a third of Slovak households that are not able to fully pay for gas heating, and companies in which energy is the highest cost item,” the party said.

One thought on “Sulík remains the Minister of Economy, he was also held by OĽaNO – SME.sk”