Army, inaugurated in Palermo monument dedicated to the fallen 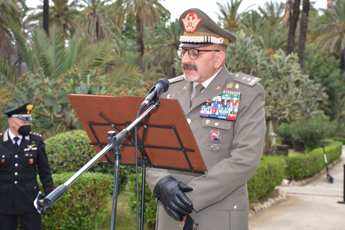 The first monument in Sicily dedicated to the military and civilian fallen in international peacekeeping missions was inaugurated in Palermo, in the presence of the highest city authorities. The work, located in Villa Bonanno, the public garden adjacent to Palazzo Sclafani, headquarters of the Military Command of the Army in Sicily, “represents a significant milestone along the path” Build the monument “, the school competition promoted by the Army in autumn of 2019, which involved thousands of young Sicilians and representatives of the regiments stationed in Sicily, in a colossal challenge to re-propose the communicative message of the works to Memory in a modern guise, through the creation of sketches “. The monument inaugurated today in Palermo was born from the combination of two works among the winners of the competition: the first, created by the Chosen Corporal Fabrizio Picone of the “Aosta” Logistic Regiment; the other, created by Daniele Ganci, a former student of the “Damiani-Almeyda-Crispi” school in Palermo, first classified in the province of Palermo. The communication proposal is “the result of a fruitful synergy between institutions, associations and private individuals including, in addition to the Army and the school world, the Municipality of the City, the Superintendence for Cultural and Environmental Heritage and the Sicilian Sturzo Center which sponsored the initiative”. From the words of Major General Maurizio Angelo Scardino, Military Commander of the Army in Sicily, “the emotion and gratitude to those present for the recognition of this silent sentinel of Memory, as a tribute to the extreme sacrifice of those, military and civilians, they sacrificed themselves in international missions for Peace “. The monument, installed in one of the richest places in the history of the city, is a” recognition of the commitment of young Sicilians – students and soldiers – on the paths of Memory and point of reference for institutions and citizens who want to remember all the fallen from the second post-war period to today “. “The significant ceremony held immediately afterwards at Palazzo Sclafani is even more extraordinary. It was the conferral of honorary citizenship to the” Lancieri di Aosta “Regiment (6th), to the 4th Engineers Regiment and to the” Aosta “Logistics Regiment, the three Regiments of the “Aosta” Brigade stationed in the city. In the presence of the main civil and military Authorities, the Mayor of the City, Professor Leoluca Orlando, awarded the Commanders of the three regiments the highest citizen recognition for the great commitment made by their respective regiments for the city and for the territory, as well as during the many commitments abroad “. In memory of the “Sicilian Vespers” Operation, up to the interventions for public disasters, to finish the current operation to control the territory “Safe Roads” and the precious support in contrast to the Covid 19 emergency, the Mayor expressed “words of applause and gratitude for the great spirit of service and self-denial that has always animated the women and men who wear the colors of those Regiments “. “The Army is obviously proud of this tangible sign of the strong link with the territory, the institutions and the citizens of Palermo – commented the Division General Maurizio Angelo Scardino, Commander of the Army in Sicily – On behalf of the Armed Force, I would like to thank more alive for the sensitivity shown by the Municipal Administration, by the Council and by the Mayor in particular, for the much appreciated gesture that strongly rewards the army’s daily commitment, perfectly represented by the Palermo regiments ”. Both ceremonies were held in compliance with anti-Covid regulations.

Green Pass, here are the shops where you don’t need them

Torregiani: “Film tells the story of my family thrown into a whirlwind of fear”

Red and orange zone, Sileri: “Region system does not change”