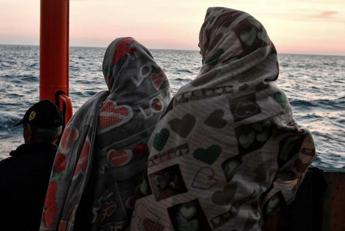 “I saw men and women who were very tried, there were also children. All of them bore the signs of suffering in their bodies”. This was said to Adnkronos by Fr Carmelo La Magra, parish priest of Lampedusa, who on Monday, together with the volunteers of the San Gelardo parish, brought water, fruit juices and thermal blankets to the migrants who had remained for hours on the Favaloro pier before being transferred to the hotspot. in the Imbriacola district, which collapsed after the flurry of arrivals that brought over 2,000 people to the largest of the Pelagie. A consistent flow but not unexpected according to the parish priest. “With the arrival of good weather, departures increase – he says -, it is a phenomenon that is repeated punctually every year, yet we still find ourselves unprepared, caught off guard by something that cannot be called an emergency unless we want to escape from the own responsibilities “. Images, those of the migrants massed on the pier, which strike straight to the heart. “Someone was trying to shelter from the sun under the cartons, someone else was trying to sleep among the garbage. They asked for water, they were thirsty, and walked barefoot in the dirt.” Crammed into a strip of concrete in inhumane sanitation conditions. “There are only two toilets on the pier, very dirty even before the last landings because no one takes care of their cleanliness”, he says. On social media the priest posted the images of plastic bottles full of urine and wrote below: “Government of the best shame”. “Hundreds of people. Even just five Italians left in those conditions for a few hours would have been enough to arouse the indignation of an entire nation”. And again: “The political will to tackle the phenomenon is lacking – concludes Don Carmelo -. It is dealt with from an economic, health and safety point of view, but we never work towards a true reception. No one proposes solutions, I only see so much propaganda”.