Change of season disorders, here’s how to help the body 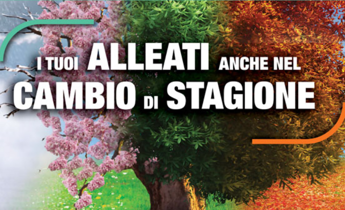 The arrival of summer is a period that many look forward to with joy, but which can often cause disturbances to our body. It is a period of change: the hours of light increase, influencing the circadian rhythms, the external environment changes, with sudden changes in temperature and humidity, and our habits also change. This means that the organism is also ‘forced’ to undergo a change, and it is not uncommon for the reaction to this event to manifest itself through annoying signals. How to help the body was at the center of the ‘Your allies also in the change of season’ event, promoted by Alfasigma on the online platform www.insiemenelcambiodistagione.it. The change of season, in fact, can give rise to the so-called ‘seasonal affective disorder’ (Sad). “Spring syndrome, or lethargy, involves excessive fatigue, difficulty concentrating, a sense of general weakness: many people in this period feel constantly drained and unmotivated, as if they lack the necessary fuel to carry on the many daily activities”, he said. explained Maria Luisa Cravana, nutritionist biologist. In this delicate period, even the intestine is subjected to a phase of adjustment of the new habits, which can alter the bacterial microflora. According to Paolo Orsi, gastroenterologist, “the link between the change of season and digestive disorders is well established, often an intensification of discomfort occurs, in subjects already predisposed, and new cases of alterations and dysbiosis of the gastrointestinal system. psychosomatic aspects and also alterations of some neurotransmitters that act both directly and indirectly on our intestine “. “The temperature changes characteristic of the period, moreover, can cause a lowering of the immune defenses and the intestine and the immune system are closely linked – continues Orsi – The intestine, in fact, is not only the main organ of digestion in humans, but contributes in a decisive way to the body’s immune defenses. Just think that about 70% of the body’s immune cells are located in the intestine “. But it is not only intestinal cells that interact with the immune system. According to Patrizia Brigidi, Professor of Biotechnology of Fermentation of the Department of Medical and Surgical Sciences of the University of Bologna: “There are about 39 trillion bacteria, viruses and fungi that inhabit our intestine and make up the intestinal microbiota. It is a unique and personal entity, different in each of us; a dynamic multitude, which varies with age, diet, environment and obviously also with the seasons. Even the air has its own microbiome – Brigidi observes – ‘the aerobiome’, a cloud of microorganisms that surrounds us and that changes according to temperature and humidity, thus being affected by seasonality. Therefore, the air we breathe also influences our intestinal microbiota. Furthermore, recent studies show that in regions where there are strong climate changes the microbiota is more variable than in other regions of the world. “What to do? Certainly nutrition plays a very important role: it prevents annoyances, when it is correct or on the contrary, it aggravates them when it is wrong. Diet, in fact, is a key factor that influences the composition of the intestinal microbiota, but to be truly effective, it must be a habit “To counteract physical and mental fatigue it is preferable to consume light meals rich in fresh and dried fruit, vegetables, whole grains, lean meats, foods rich in vitamins, and avoid foods that are difficult to digest – suggests Cravana – To maintain intestinal balance it is good to regularly consume fermented foods such as yogurt and miso, fiber, whole grains and instead avoid excessive consumption of meat, fried foods, spicy and spicy foods, chocolate, aged cheeses and of course carbonated drinks and alcohol “. In addition to nutrition, regular physical activity and a healthy lifestyle (not smoking, going to sleep at least two hours after meals and reducing stress) are two other important factors in preventing these disorders. But not only. “During the changes of season, patients enter the pharmacy complaining above all gastrointestinal disorders, reflux, headaches, tiredness and exhaustion – explains Carolina Carosio, national president of Young Pharmacists – For all these disorders, the approach with food supplements is the first advice at the counter, often decisive and easily manageable by all patients. Privileging the intrinsic characteristics of the products, in terms of formulation quality and physiological actions, is always the winning choice, both for the professional who dispenses the advice, and for the patient who uses it “. The food supplements Alfasigma “Yovis and Carnidyn Plus, work on two different fronts, both of which support the organism to replenish the deficiencies that arise during the different moments of life, even in the change of season. The line of Yovis probiotic multi-tier food supplements , multi-species and multi-genus, contains billions of enzymes to help restore the balance of the intestinal microbiota. While the Carnidyn Plus dietary supplements, based on carnitine, have a complete and balanced formulation to combat physical and mental fatigue “, concludes the company .

Covid, Ecdc map: all of Italy and more and more of Europe in dark red

Covid, Bassetti: “There is a middle ground between the choice of GB and Italy”