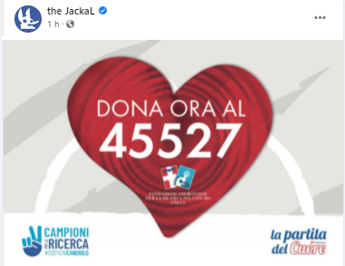 The Jackal are back on the Aurora Leone social ‘case’ after the announcement of the resignation of the general director of the National Singers Gian Luca Pecchini. “We take note of the resignation of the manager of the national singers following the ‘great misunderstanding’ of last night – they write on social media – We hope that what happened is not reduced to this: a misunderstanding. There is a broader discourse that goes beyond the personal story, sexism and male chauvinism as real problems that affect millions of women every day “. Read also “We invite everyone, however – they add – as Aurora did in the first stories published hot last night, not to confuse the problems: it is not right that what happened has negative consequences on fundraising, a mission that the national singers pursue with commitment for 40 years. Inclusiveness and equality must not be obstacles for any cause, let alone as important as the fight against cancer. Confusing the two levels is a mistake that does not do justice to either of the two battles. This is why we say to the many people that they are writing to us with affection in these hours to show her support, that Aurora did not go there to win a game: Aurora was there, like Ciro and like all the others who took part in the event, to contribute to the research “. “So help us do it, let’s give a strong signal: a donation to 45527 to support cancer research”, they conclude.

Sanremo, the Big are measured on social media: Morandi-Emma-Mahmood on pole

One thought on “Aurora Leone, The Jackal’s post after Pecchini’s resignation”