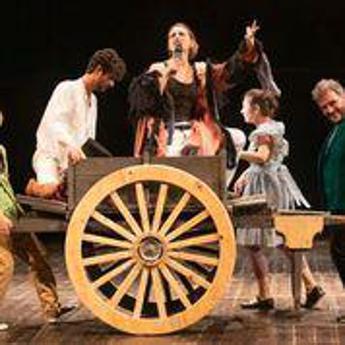 The Teatro Stabile di Catania, with a new billboard, entitled ‘Evasioni’, which will offer the public five shows between the Sala Verga and the Corte Mariella Lo Giudice of Palazzo della Cultura, so as to multiply the spaces and the opportunities for use while respecting safety regulations. As soon as Sicily can return to the yellow zone, the Theater will also come back to life and the local public – starting with the subscribers – to regain possession of it. One show in Sala Verga and four in the courtyard of Palazzo della Cultura have been included in the calendar. All debuts and all productions or co-productions. With the necessary safety measures – control of the incoming temperature, spacing in the room with a capacity of 50%, a renewed ventilation system at Verga to ensure a fresh and healthy environment. We will start again in Sala Verga with Enzo Vetrano and Stefano Randisi with ‘ A Cirimonia ‘by Rosario Palazzolo (From 18 to 27 May), co-produced with the Biondo Theater of Palermo and already winner of the Award of the National Association of Italian Critics. Director,’ a theater without an audience is not civil ‘ of the Teatro Stabile of Catania which will be staged until the end of July at Palazzo della Cultura. On the bill ‘The last of Alagona’ by Nino Martoglio (From 20 to 30 May), directed by Elio Gimbo and the puppets of the Marionettistica Fratelli Napoli, ‘The new colony’ by Luigi Pirandello (From 10 to 20 June), adapted and directed by Simone Luglio for a choral cast, young and very lively, ‘Pinocchio’ (From 8 to 18 July), an exciting unreleased film by Franco Scaldati, adapted and directed by Livia Gionfrida. Last appointment with ‘La Pacchiona’ (From 21 to July 31), a Sicilian version of the funny comedy Fat Pig by Neil LaBute, translated and directed by Marcello Cotugno. Meanwhile, the live activities of the Turi Ferro project, a Sicilian artist, will resume. Celebrations in the 100th anniversary of the birth, the rescheduling of which will be announced shortly. “If we have called this new billboard Evasioni it is precisely to declare that the Theater allows us to finally find ourselves in a physical and symbolic space different from the one in which we have been forced in recent months, freeing our gaze and ideas – declared Laura Sicignano, director of the Teatro Stabile di Catania – The theater does not exist without an audience and – we believe – a society without a theater is not civil. Returning to meet us live is the mission of our work and we hope you have missed us as much as you have missed us “.