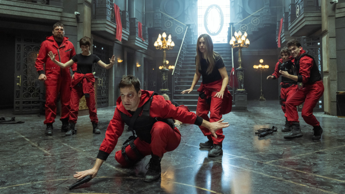 Netflix unveils the first images of the last season, the fifth, of ‘The House of Paper’ which will be released in two parts, on September 3 and December 3. The robbery continues, war is upon us and the gang leader has lost control. The end of the Netflix original series created by Álex Pina is getting closer and closer. The first images of the last season reveal chaos both inside and outside the Bank of Spain, with the Professor caught off guard after Sierra has found his hiding place and Lisbon is now safe inside the bank. The war begins and the gang is forced to bring out their toughest side to survive, fueled by anguish, guns and desperation of not having a plan. The gang has been locked up in the Bank of Spain for over 100 hours. They managed to save Lisbon, but the darkest moment comes after losing one of their own. The professor has been captured by Sierra and, for the first time, has no escape plan. Just when it seems like nothing can get any worse, a far more powerful enemy than any we’ve faced so far enters the scene: the army. The end of the biggest heist in history is approaching and what began as a robbery will turn into a war.