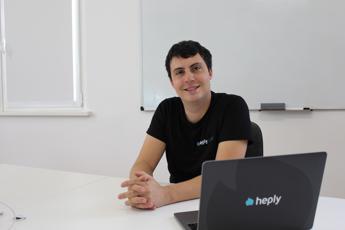 If all this had happened by chance, it would certainly have been good. However, making it become an organized and governed process has transformed it into a real corporate asset, one of the most important because it aims at the ‘happy workplace’ and at reconciling the complicated relationship between employees in the era of smart working. This is what happened to Heply, a software agency made up of young professionals from the digital world, and all under 35, which announced the birth of a new manager: the Chief Happiness Officer, or the Manager of Happiness. The unprecedented role is covered by Andrea Virgilio who in the ‘technological and digital company’ also plays the role of the more traditional CEO, now struggling, every day, with budgets and also with “training for happiness”. A ‘gymnastics’ of the soul that counts on the close support of the Chief Memes Officer: the one who deals with memes, also a new managerial figure born within the walls of the software agency. But what are memes and how do they relate to happiness? Memes, CEO Andrea Virgilio recalls, “are a symbolic element of a culture that is transmitted from one individual to another and that receives it by imitation”. But “every culture, every community and every self-respecting organization – he observes – has its own language, its own method of communication, based on a code: it has shared values ​​and a common goal”. And this is “how it also happens in companies” assures Andrea Virgilio who, every day, by virtue of his role, finds himself interfacing with “different dynamics, including that of communication between employees”, which requires particular attention “so that create a form of internal exchange recognized by all “, an exchange that can make the difference for the serenity and happiness of those who work. In fact, among the Happy Coders – it is no coincidence that Heply employees are called this – a way of communicating and sharing one’s thoughts has developed through memes, ironic images that portray certain moments of life within and beyond outside the company and which allow tensions to be dissolved, empathy fostered and trust between people widened “. Although banal in appearance, this trend has instead become “a peculiarity in Heply where every expression, every image and every word” has taken on its own meaning, transforming itself into a real communication code, explains the young CEO. “In particular, I perceived – says Andrea Virgilio – the importance and weight of ‘a slang’, of that jargon which,” when new people joined the team, obviously had to be explained. “Why , explains Andrea, “the meaning of some phrases and images that for all ‘old employees’ were implied”, for the newcomers they were a deep mystery. And this is how the first seed of the new culture made in Heply blossomed. Virgiglio stresses that “just as every country, every society, every people has its own language, the same should apply to businesses that operate according to rules, values ​​and ethical codes and that, above all, are made up of human beings who interact with each other, yes they compare and collaborate. “It is also in this that Andrea has therefore chosen to invest, once assuming the role of Manager of Happiness, also in the new figure of the Chief Memes Officer in charge of managing this new important corporate asset. dale. It is indeed important, they observe from the digital company “that everyone is recognized for their role and duties in the company, especially when these figures reflect the culture of the company they are part of”. Andrea, as CEO and Cho, now carries out two very different tasks, just as the objectives and responsibilities that these roles provide are different. As a Happiness Manager he has the task of “managing a very fickle feeling” and his skills require “empathy, listening and safeguarding the well-being of others”. Precisely for this reason, Virgilio attributes “great importance to this type of communication activity, which, although not linked to an output in terms of productivity, contributes to producing an equally fundamental but often underestimated result in companies: good humor and satisfaction of people with whom we work every day “.” This sarcastic lightness that now marks our days – and that has nothing to do with superficiality – has allowed us over time to train and reinvigorate ourselves more and more as a team, cultivating an organizational culture outside out of the box and disruptive “. Recently, our CMO decided to get help from some colleagues and to create a Memes Committee because in smart working, “it is useful to have more ears that can find and tell the company’s highlights through memes”. The task of the Memes Committee is “to invest its time in the protection of this culture” continues Virgilio who now speaks of an “organized and governed process” which makes it “a real corporate strategic asset”. by Andreana d’Aquino

1 thought on “Work, the manager arrives for happiness”