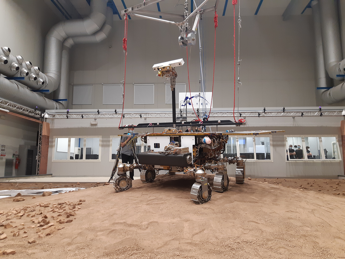 The tests of the Rover ExoMars 2022 Ground Test Model (Gtm), twin of the flight model nicknamed “Rosalind Franklin” that will arrive on Mars in 2023, will start soon on the ‘Martian terrain’ of Altec. After the tests carried out in the Thales Alenia Space plant ( Jv between Thales 67% and Leonardo 33%) of Turin, the Rover was in fact transferred to the Rover Operations Control Center (Rocc) of Altec and it is here that, in the coming months, test operations and mission simulations will be carried out to prepare the ExoMars 2022 mission. Altec explains that the integration activities have recently been completed in the Thales Alenia Space clean rooms and now the Gtm will be commanded by a team composed of technicians and engineers who have integrated it, together with Altec colleagues, to carry out operations on the terrain specially prepared to reproduce obstacles, slopes and rocks similar to those found on Mars. “After months of intense integration and testing activities, carried out in the clean rooms of Thales Alenia Space in Turin, the arrival of the Gtm in Altec represents a first important milestone that highlights the crucial role of Italy in the control of European missions of planetary robotic exploration “underlines Vincenzo Giorgio, CEO of Altec. “This result, also confirmed by the fact that the next European mission of this type – Mars Sample Return – will also be controlled by Rocc, was achieved thanks to the determination of the Italian Space Agency, which strongly wanted and supported the ExoMars project. “says the manager. For ASI, in fact, Giorgio added, “this is the first step to nominate the structure towards future missions for the study of Mars but also of other celestial bodies”. The MTS was conceived and built to represent a faithful simulation of the Martian surface, with particular reference to the area of ​​Mars on which the Rover will land. This facility, which is located inside the Rocc itself, is unique in Europe, it will allow to carry out the test activities, the necessary simulations, before and during the mission, the training activities of the ground operators and will constitute an essential element. for the analysis and resolution of any non-nominal operational-environmental conditions that may arise during the mission.Once positioned on Altec’s Mts’ Martian terrain, the Gtm rover of the Exomars 2022 mission will initially be used to verify the complete functionality of all systems, placing, explain from Altec, “particular attention to the mobility aspects of the rover on the MTS terrain, its ability to overcome even complex obstacles and the effective ability of Rocc – the Rover Operations Control Center – to fully manage the Rover Gtm through the reception and analysis of telemetry data and the sending and execution, on the Gtm, of the relative remote controls. set to optimize the Rocc’s ability to conduct the Rover’s Martian mission. The ground team will try to ‘challenge’ the GTM rover to the limit of its possibilities by recreating very complex ground conditions, through appropriate reconfigurations of the MTS. All this, explained by Altec, “will contribute to gaining experience and confidence to better manage the Rover on Mars”. Not only. The autonomous navigation capabilities of the rover will also be tested, essential in case of absence of contact with the Earth and, in any case, necessary to simplify the maneuverability of the rover due to Earth-Mars communication delays, due to the great distances between the two planets. (up to 20 minutes late). The ‘Gtm – Mts’ combination will make it possible to verify aspects such as the grip of the wheels on the ground, the ability to drill the soil, take and analyze samples up to a depth of two meters, even in the presence of different soil stratigraphies. ExoMars 2022 is a program of the European Space Agency in cooperation with the Russian Space Agency Roscosmos with the contribution of NASA. In the mission of 2022 an industrial consortium is active which sees Thales Alenia Space in Italy responsible for the design, development and verification of the whole system, the development of the navigation of the Carrier Module and the guidance system and the realization of the Edl / Gnc development Rover system, including the Laboratory of Analysis (Ald), as well as providing basic components of the Descent Module (Dm), including the radio altimeter. In this context, Thales Alenia Space in Italy also implemented an in-depth technical partnership with Lavochkin (Russia) with European contributions for the development of the Descent Module (Dm) called Kazachok. OHB is responsible for the development of the Carrier Module (Cm) as well as some subsystems of the Ald Analytical Laboratory (Spds Mechanisms, Structure and Wiring). The Rover vehicle itself was supplied by Airbus Defense and Space in the UK. Leonardo is developing the drill for ExoMars 2022 which will excavate the Martian subsoil to a depth of two meters plus the control unit of the Drill and Ald mechanisms and the software. Altec-Aerospace Logistics Technology Engineering – a Thales Alenia Space company in Italy (63.75%) and Asi (36.25%) – is also responsible for the design, development and maintenance of Rocc, the Rover and Control Operations Center. control of the Rover on the Martian surface.