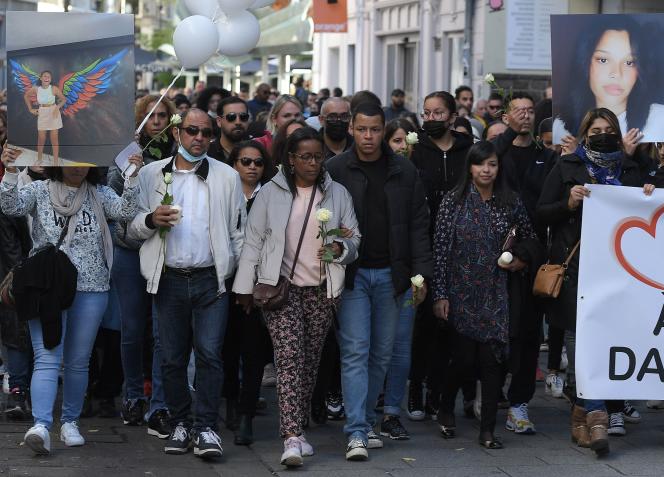 More than a thousand people took part, Sunday, October 24, in Mulhouse, in a white march in memory of Dinah, a 14-year-old girl who committed suicide, a victim of bullying according to her family.

The procession, led by the parents and the brother of the teenager who hanged herself on the night of October 4 to 5 at her home, traversed the streets of the city center, massed behind a banner proclaiming: “Dinah, forever in our hearts”. The words “Dinah rest in peace” and “In memory of Dinah. Stop harassment ”, barred other banners. Among the participants in the march, many coming with their families and carrying a white rose, some chanted “Justice for Dinah”, “Words hurt, words kill” Where ” never again “.

“Her name was Dinah, she was going to be 15”, recalled the mother of the teenager before the departure of the procession, launching, the voice broken, this call: “The harassment must stop”.

On RTL, her mother recounted the process that began when she was in grade 4e. “Dinah had a small group of friends and one day she had the misfortune to tell them that she was LGBT. (…) They created a WhatsApp group to make fun of her before jostling her in the halls of the college and insulting her as “dirty lesbian”, “dirty nerd”, “dirty race” or even “dirty mestizo” “.

According to Dinah’s mother, who criticized the teaching staff for “Negligence” and to have ” close your eyes “ on the drama experienced by her daughter, she had received messages such as “Don’t worry, you will die soon” Where “We will send you links on the internet so that you can die”, after a first suicide attempt, in March. Arrived in front of the Lambert high school that the teenager attended, the crowd chanted “Dinah, Dinah, Dinah …” to applause, before dispersing. According to France Blue, the family intends to file a complaint against the college where the teenager had been educated.

On Friday, the prosecutor of the Republic of Mulhouse, Edwige Roux-Morizot, had announced to Agence France-Presse that an investigation into the causes of death had been opened. It must allow “To understand the reasons for the gesture of this teenager who, according to her relatives, had been the object of harassment within her school some time before”, she clarified. “Immediately”, bullying is ” a hypothesis “, insisted the magistrate.

1 thought on “White March in Mulhouse, in memory of Dinah, harassed teenager who committed suicide – archyde”