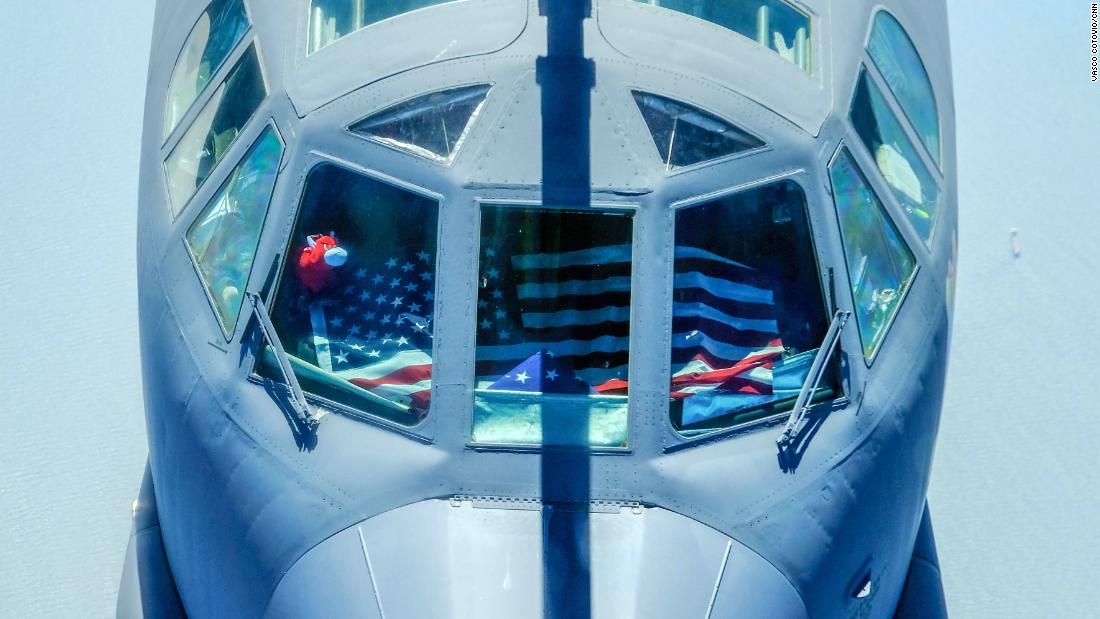 Biden and Putin to meet in June: the issues to be discussed 1:21

(CNN) – As the B-52 Stratofortress approaches from below, the trim in the cockpit reflects the importance of the day. Along with a plush toy of Benny the Bull, the Chicago Bulls mascot, is an American flag that covers the board from one end to the other. It’s Memorial Day in America, one of the nation’s biggest holidays, but these airmen have little time to celebrate or remember.

And at more than 8,000 meters up, somewhere on the UK border, there is little room for error.

The B-52 carries an American flag during the NATO Memorial Day exercise.

“We were refueling a B-52 that was conducting a NATO operation in NATO airspace,” explains Captain Todd Berglund aboard a KC-135 tanker, one of the aircraft’s refueling craft. Air Force American. “We are basically just trying to make sure that we are enabling their mission and that they can do what they need to do.”

The operation can take between 15 minutes and an hour and requires great coordination between the crews of the two aircraft. Both reduce their speed to just 500 km / h approximately and synchronize the movements. This allows an arm to descend from the KC-135 and connect to an opening in the top of the B-52, pumping out thousands upon thousands of gallons of fuel in minutes.

Airmen, who have done this many times before, make that complicated work look smooth. “We do it so often that it becomes a habit, it is our profession, it is what we do,” says Captain Berglund. “Luckily today everything went according to plan, but it doesn’t always happen that way,” he adds.

While the refueling operation was in progress, two Royal Air Force (RAF) aircraft – a Typhoon and a training Hawk 1 – followed the encounter, practicing for occasions when enemy aircraft enter space. UK air.

“They do a lot of interceptions so that if they need to do it operationally, they know what it’s like to intervene if a country’s aircraft enters their airspace and how to do it,” Captain Berglund explained.

Monday’s operation was part of a larger NATO exercise spearheaded by the U.S. Air Force bomber task force. In Operation “Allied Sky”, about 100 planes from 22 NATO member countries got together to fly over all the countries that make up the North Atlantic alliance in a period of 12 hours.

“Bomber missions demonstrate the credibility of our forces in facing a global security environment that is more diverse and uncertain than at any time in our history,” said Gen. Jeff Harrigian, commander of NATO Allied Air Command, the United States Air Forces in Europe and Africa. “Today’s mission is an impressive demonstration of NATO air superiority and together there is no challenge that we cannot meet,” he added.

While the interception of RAF aircraft in British skies was merely an exercise, when US Air Forces fly over parts of Eastern Europe, the Baltic, or the Black Sea they frequently encounter Russian aircraft.

It is at times like these that Captain Berglund and his crew train.

“Things can happen quite quickly, it is difficult to predict how busy the airspace is, how busy the radios are, if there will be other planes,” he says. “It’s really just going over all the contingencies in your head, how to act if something changes.”

In the last decade, several encounters with Russian aircraft have been described as dangerous by the US military, who have criticized their Russian counterparts for unprofessional and dangerous actions.

Get to know the great Russian base in the Arctic 3:25

It is part of a pattern of behavior on both sides reminiscent of the Cold War era, when the United States and the then Soviet Union constantly tested each other, prodding defenses for potential weaknesses.

And as the United States flies its B-52s over Europe, Russia last week deployed three of its Tu-22M bombers at the Hmeymim air base in Latakia, Syria. The Tu-22, also known as the ‘Backfire’, flew over Syria many times in recent years, as Russia intervened to assist President Bashar al-Assad during the country’s civil war. However, before they always flew from their bases in Russia.

Aircraft from 22 NATO member states flew over all alliance countries in 12 hours.

This is the first time they have been deployed to Hmeymim. The move is part of Russia’s broader commitment to the region, where it is also investing millions to expand the Tartus naval base after agreeing to a long-term lease with the Syrian government.

If Russia’s footprint in the region continues to expand, it could pose a threat to US and NATO forces in the Mediterranean, but also to US allies in the Middle East, for example Israel.

Not only the behavior dates back to the Cold War: also some of the hardware. While Russia’s Tu-22M first entered service in 1972, the US Air Force B-52s were built in the 1950s. The KC-135 arrived shortly thereafter, in 1957. Up close, the Signs of the passage of time are easy to spot.

The KC-135’s engines are loud, and the only way to communicate from takeoff to landing is through state-of-the-art noise-canceling headphones. While avionics and sensors have been updated, several displays remain analog and most tasks are done manually.

“It’s old, but reliable,” Captain Berglund says over the intercom, and the crew nod. “They update it from time to time, but it is reliable and it works, so there is no need to change much,” he explains.

Berglund tells us that it “feels good” to fly the plane, especially considering “all the generations of pilots who have been able to fly it.”

And when it comes to refueling the B-52, the pairing with the KC-135 is ideal.

“The KC-135 was made for the B-52,” he explains. Berglund said that while the Air Force began replacing some of the KC-135s with newer KC-46s, the older model is expected to remain in service beyond 2040.

For an aircraft that was built in 1957, that means it will be close to 100 years in service.