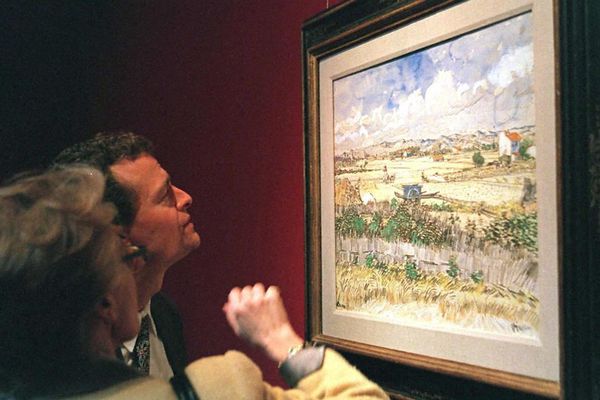 The watercolor “Cornstacks”, painted by Vincent Van Gogh in Arles in 1888 will be auctioned in New York on November 11th. The sale of the work stolen by the Nazis will settle a dispute between two Jewish families and the heirs of the last American owner.

Influenced by Japanese art, Van Gogh was in search of a radiant, warm light that reveals colors like no other. He chooses the southern one. He moved to Arles in February 1888.

His paintings in Provence are often associated with yellow. This is the case with watercolor Wheat stacks which he painted in June 1888.

“He literally worships the yellow of the Provence sun, and the sulfur and golden hue of its light”, can we read on the Foundation website Van Gogh.

It is one of the most sought after periods of Van Gogh, the last part of the life of the artist who died two years later.

The painting, which was last exhibited in 1905 in Amsterdam and has never been reproduced in color, is estimated at between 20 and 30 million dollars (between 17.2 million and 25.9 million euros).

After tough negotiations facilitated by the famous Christie’s house, it was agreed that the work would be offered for auction in the dedicated sale “The Cox Collection: The Story of Impressionism”, on November 11, 2021.

Christie’s is honored to announce The Cox Collection: The Story of Impressionism, one of the greatest American collections to ever appear in the auction market, featuring masterpieces by Caillebotte, Cézanne and Van Gogh. https://t.co/mbwxiH4FIc pic.twitter.com/D3w0IP4gyU

The sale is to settle a legal dispute between the heirs of the two Jewish families who owned it during the Nazi period until 1945, and the heirs of the last owner, Texan collector Edwin Cox, who died in 2020.

Wheat stacks was originally a preparatory study for oil on canvas painted a week later. The artist gave it to his brother Theo.

The work was then sold by his widow to the Parisian collector Gustave Fayet in 1907 and, 6 years later, to a Berlin industrialist, Max Meirowsky.

Under Nazi threat, the Jewish collector fled Germany in 1938 for Amsterdam. He entrusted the work to a German art dealer who sold it shortly afterwards to Alexandrine de Rotschild, from the famous family of Jewish bankers, settled in Paris. Which in turn fled to Switzerland when war broke out.

Recovered by the Nazis, the work is found in Austria, but its trace is lost after the war. Until 1979. An oil tycoon acquired it discreetly. He kept it preciously at home out of sight, with the sole knowledge of those close to him.

It was not until his death last year, with the sale of his fabulous art collection, that the work resurfaced. And that the Meirowsky and Rotschild heirs try to assert their rights on the painting.

The three parties finally reached an agreement to share the fruits of the sale at Christie’s. Even if it is auctioned on the lowest estimate of $ 20 million, this watercolor should then be Van Gogh’s most expensive work on paper.

The record to beat is that of The harvest in Provence, sold at Sotheby’s, London, in 1997 in less than two minutes, for $ 14.6 million. Another watercolor by Van Gogh painted in Arles in June 1888, a day or two later Wheat stacks.

The highest price ever for a Van Gogh is $ 26 million, it’s about oil Undergrowth, sold in New York in 1995.

In February 1888, Vincent Van Gogh left Paris for Arles. He comes there to look for that southern light that Henri de Toulouse-Lautrec praised him. He traveled the region on foot and painted landscapes, harvest scenes and portraits.

In May-June, he went to Saintes Maries de la Mer. He stayed there for a week during which he painted two seascapes, a view of the village and several drawings of gardian’s huts.

He also formed a tumultuous friendship with Paul Gauguin, who joined him in October 1888. Two months later, a crisis broke out between the two men.

Van Gogh cuts off his ear in a fit of madness and paints some time after his famous Self-portrait with the bandaged ear. In 1889, Van Gogh joined the asylum of Saint-Rémy-de-Provence where he remained very prolific and painted in particular his large series of paintings of wheat fields.

Today, the works of Vincent Wilhem Van Gogh are estimated between 200,000 euros and 78 million euros.

One thought on “Arles: will a watercolor by Van Gogh stolen by the Nazis become the most expensive work on paper in the world – France 3 Régions”