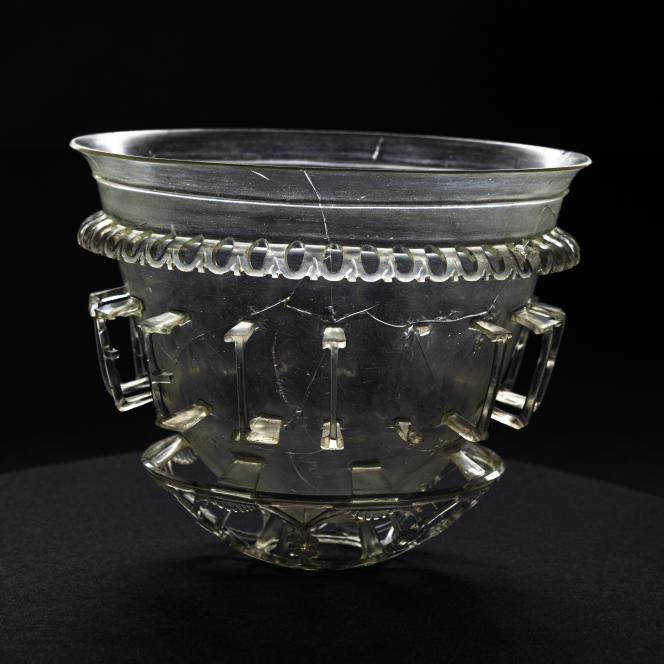 On November 13, 2020, during the presentation by videoconference – second confinement obliges – of archaeological excavations carried out in Autun (Saône-et-Loire), we only had eyes for her: a cut of extreme refinement, with raised letters, carved from a single block of glass. Of these so-called “diatrets” vases, there were only about fifteen complete copies in the world, and the information had circulated around the planet. We forgot a bit the context of this excavation carried out by the National Institute for Preventive Archaeological Research (Inrap) under the direction of Carole Fossurier, on a plot previously occupied by a necropolis founded in Antiquity. We put aside the some 230 graves unearthed during a construction site that had spread from June to September 2020, to focus on the sarcophagus in which the cup, the first discovery in France, had been found. We watched, fascinated, this photograph showing her encased in a mantle of earth.

Here comes a new date, Friday October 22, 2021, with the presentation, in Autun, of the restored vase. What has happened in the meantime? Despite appearances, the object, which dates from the IVe century, was no longer in one piece. “The wear and tear of time has fragmented it, explains Nicolas Tisserand, archaeologist at Inrap and deputy head of the Autun excavation. It was held by the earth when it was discovered but, in reality, we had hundreds of pieces, all in place. ”

Having never worked on this type of vase, the researchers decided to call on two of the greatest experts in ancient glassware, the Germans Katja Broschat (Central Roman-Germanic Museum in Mainz, the RGZM according to the German acronym) and Constanze Höpken (University of Cologne). “They came three days later by car, taking their days off, says Nicolas Tisserand. It must be said that we had not discovered a complete diatrete vessel since 1975! “

Pieces of a puzzle

First step: remove the earth and lay out all the pieces like the pieces of a puzzle. The hundreds of fragments, some of which were only a millimeter long, were then stored in bags with color codes. Then the vase went to the RGZM for the restoration, which involved a complete cleaning, piece by piece, and the careful reassembly and gluing of this three-dimensional puzzle.

The result is sumptuous. We are stunned by the finesse of the work carried out by an anonymous craftsman seventeen centuries ago. Weighing just 196 grams, the fit is a bit wider than it is tall at 15 centimeters in diameter and 12.6 in height. On its edge, the glass is barely 2 millimeters thick. Its decoration is quite sober compared to other vases of the same kind, with a simple collar with oval motif. The base of the vase is a sort of delicious small filigree bowl, made up of eight intertwining ovals, decorated with palmettes, and resting on a central circle.

You have 46.29% of this article to read. The rest is for subscribers only.